Apex Legends and Titanfall have been developed by Respawn. Titanfall was exclusive to the Origin store until last November when it came to Steam. 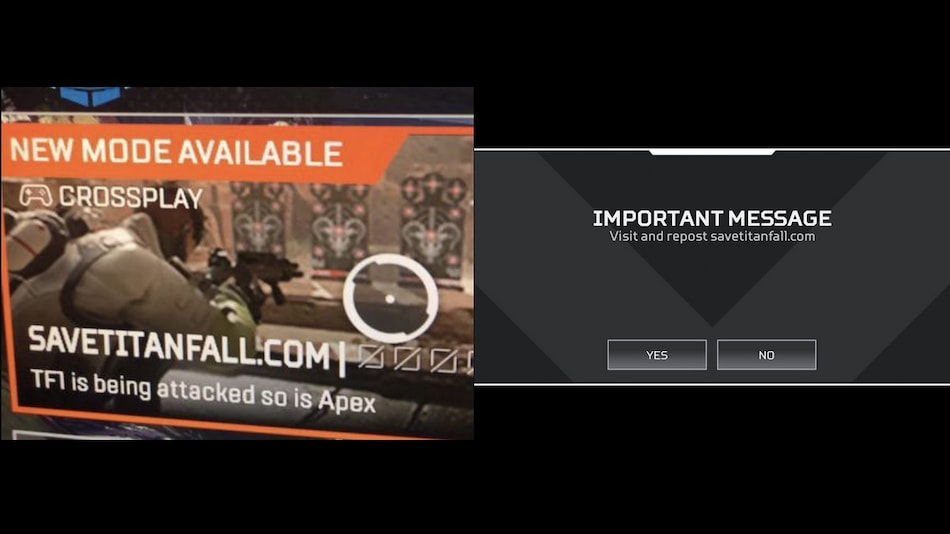 Apex Legends players are seeing the save Titanfall message in game

Apex Legends servers have been hacked in an attempt to save Titanfall — a seven-year-old game that is almost unplayable now due to multiple hacks. Apex Legends players have shared on Twitter that they are unable to get into a match and are instead getting a message that says “SAVETITANFALL.COM, TF1 is being attacked so is Apex”. Both Apex Legends and Titanfall have been developed by Respawn Entertainment, and Titanfall players have been complaining for a quite a while about the abhorrent condition of its servers that are plagued by hackers.

Respawn released Tiatnfall as a multiplayer-only game in 2014. It was quite popular at the time, but, over the years, the multiplayer experience has become a lot less entertaining. The servers are said to have vulnerabilities that have been exploited by hackers leading to server crashes and matchmaking issues. Since Titanfall is an online-only game and the developer has not fixed the issue yet, hackers have now decided to target its other popular battle royale title, Apex Legends in protest.

Players have been reporting that the server playlist in Apex Legends has been replaced with a message that reads: “SAVETITANFALL.COM, TF1 is being attacked so is Apex”. Some players said they got the message “Important Message Visit and repost savetitanfall.com,” after a match. Respawn said it has looked into the issue and has pushed a server update to solve the matchmaking problems.

“We've confirmed that matchmaking has been restored. We're keeping an eye on things but believe the issue to be resolved,” Respawn said on Twitter.

Savetitanfall.com is a website that was put in place several months ago to draw attention to the unplayable nature of the game. The website reports that hackers are using exploits that prevent players from being able to play the game and that “Respawn is willingly pretending that they do not know about the situation”. The server issues became all the more apparent when Titanfall released on Steam in November last year, after being exclusive to the Origin store since its launch in 2014. Shortly after the release, the reviews on Steam were “Mostly negative” with the most recent reviews being “Overwhelmingly negative.” In April, the developer had acknowledged the issue and said “Help is coming ASAP”.

Savetitanfall.com, however, states that neither the website nor its Discord servers have any association with the recent Apex Legends hack. This suggests the hacker or hackers are working independently to draw the developer's and players' attention to the website and to the state of Titanfall.