Ranked Leagues will bring a total of six tiers divided into four divisions.

Apex Legends Season 2 is now live, introducing a tonne of new content such as a new legend, improved battle pass, better rewards, new map, and a lot more. But there is one more Season 2 change that will prove to be a great addition for loyal players – Ranked Leagues. It is a new mode where Apex Legends players can prove their mettle and earn rewards and recognition for their efforts. Ranked Leagues will have its own matchmaking and tier-based progression mechanism, rewards, and penalties to ensure a level battlefield and allow players to hone their skills.

In an official blog post, Apex Legends developers have revealed that Ranked Leagues will follow a ladder-based ranking system that will rank players based on their cumulative achievements, gameplay behaviour, and will reward them accordingly.

Ranked Leagues will run in competitive periods called ‘Series'. The first Ranked League series is now live and will run through the entirety of Apex Legends Seasons 2. As for the ranking system, ranked Leagues will have six tiers - Bronze, Silver, Gold, Platinum, Diamond, and Apex Predator. With the exception of Apex Predator, all tiers will have four divisions that will be separated numerically, as in Gold IV, Gold III, Gold II, and Gold I, with division ‘I' being at the top of the ladder. 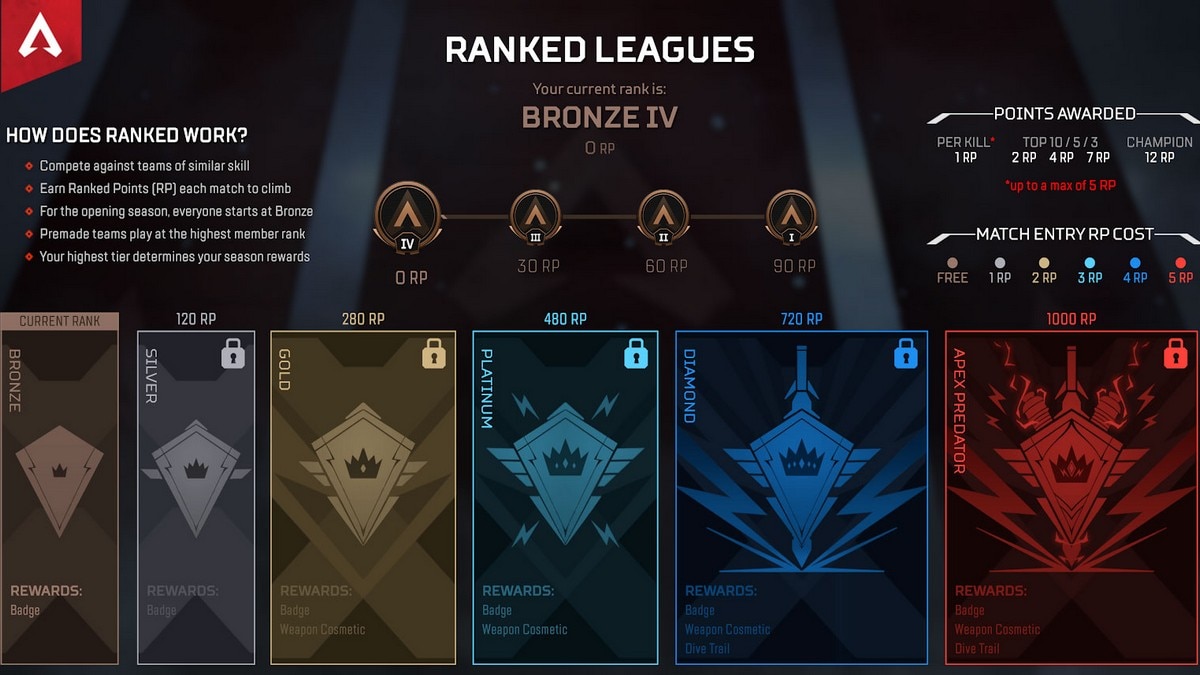 Ranked Leagues will also bring some leniency at deducting RP

All Apex Legends players will start at Bronze IV in Ranked Leagues and will have to pay a definite number of Ranked Points (RP) depending upon the tier to enter a Ranked match. Listed below is the tier-based match fee breakdown:

As for rewards, each kill in a match will be worth 1RP, with a maximum limit of 5RP for kills in each match. Finishing in the top 10 will grant an additional reward of 2RP, a position among top 5 will bag 4RP, a place in the top 3 will earn 7RP, and victory will net 12RP. But the total number of points earned per match won't exceed 17RP.

Players must be at level 10 or higher to join a match, and matchmaking will be done accordingly to prevent seasoned players from destroying unskilled players or carrying the load for their lower-ranked friends. There won't be any demotion between tiers, but players will fall or rise up the division card based on their victories or losses.

Series 1 rank badges will be given to all Apex Legends players participating in Ranked Leagues matches based on the tier they reach by the end of the series. But in addition to rewards, players will also be penalised for if they abandon a match. The penalty will be in the form of players getting barred for durations ranging from five minutes to a full week.

Another system called Loss Forgiveness has also arrived with Ranked Leagues, which is basically leniency in deducting RP losses after a match. For example, a negative net RP count after accounting for the entry fee and match points will be adjusted so the net loss is zero. But it will only be awarded when teammates abandon a match or there are some technical issues.