With post-apocalyptic online role-playing game Fallout 76 being prepped for a November 14 release date, it's only obvious that fans of the Fallout series would try to deduce which locations would be in the game. Being set in West Virginia allows for a host of locales based on existing landmarks. Redditor Chiyuiri has cobbled together a Fallout 76 map including every known, confirmed, and speculated locations. They have been colour-coded as well to give you an idea of how credible each area could be. Some of these confirmed locations include Top of the World Ski Resort, Watoga, Lewisburg, Beckley, a Nuka Cola Quantum Plant, Charleston, the Mothman Museum, Bolton Greens, and Morgantown.

Speculated locales based on users with knowledge of the area along with landmarks that appear on the real map of West Virginia are Green Bank Telescope, Shepherdstown, Beartown State Park, the Cathedral of the Blessed Sacrament among others. Fallout 76 predates every Fallout game prior and is the company's biggest Fallout game yet. You can check out the high resolution version here. 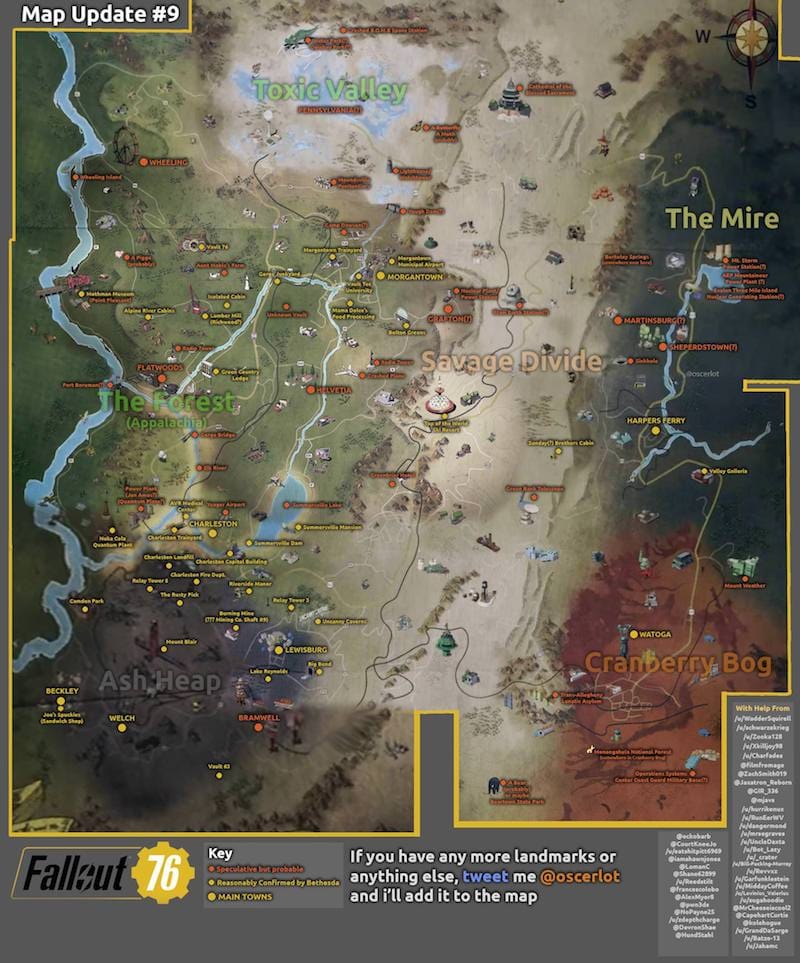 In a recent interview with Multiplayer.it (via PC Gamer), Fallout 76 director Todd Howard said that players under level 5 in Fallout 76 can't be killed by others in the game's PvP (player versus player) mode. He also stated that this feature may change before Fallout 76's release. Furthermore, he also confirmed that there is a fast travel option in the game much like past entries. Considering this is Bethesda's biggest game yet, not everyone would want to spend time travelling from one area to another. This could make it accessible to less hardcore players.

The presence of fast travel and PvP protection are welcome. Throw in the fact that PvP is optional in Fallout 76 makes it even better for those who simply want to team up with their friends and take on the game's varied enemies. With a Fallout 76 beta on the way (first on Xbox One and other platforms later), it will be interesting to see what our first look of West Virginia in Fallout 76 brings.

Further reading: Fallout 76, Fallout 76 map
iOS Crashing Bug on Typing 'Taiwan' Was Due to Code to 'Appease China': Researcher
No Man's Sky Story, Space Combat, and Exploration Changed Ahead of Xbox One Launch