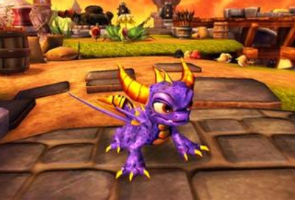 Highlights
To impress kids these days, it's not enough to make another video game. Mere action figures won't do, either. So Activision is merging the two.

With "Skylanders: Spyro's Adventure," Activision is using some of its "Guitar Hero" technology in a new venture that's part handheld toy, part digital entertainment. Aimed at kids, "Skylanders" is among the latest and most ambitious game in a growing genre that blends a child's physical world with a video game and online media.

The new game marks Activision's latest stab at a must-have holiday hit, less than a year after it killed off its iconic "Guitar Hero" franchise. Although Activision Blizzard Inc. still has hit titles such as "Call of Duty," people are increasingly turning to free or cheaper games on mobile devices and social networks and buying fewer expensive video game discs that account for a large chunk of Activision's business.

"Skylanders," available for $70 beginning Sunday in North America, comes with three 2-inch-tall action figures - Spyro, the fire-breathing purple dragon, of course, along with others, such as a guy made of tree trunks, or Eruptor, the lava man. Extra figures cost $8 each.

Using a plastic platform about six inches in diameter, the figures connect wirelessly to your video game system, the same way plastic instruments connect to on-screen musicians in "Guitar Hero."

As with other games, you still control their characters on the screen. But you need the figures, which store data and transmit characters' histories to the nearest game console. Each works like a wireless thumb drive for data storage. Connect it to the system, and the game recognizes all that the character has been through.

So you can start playing the game at home on a Wii, grab the Spyro figure and head to a friend's house. There, you can continue playing the game on the PlayStation 3 without losing all you've accomplished on the Wii version. This hasn't been possible before.

Sure, there's stuff like Webkinz, the toy animals that come with secret codes that kids type into a website to play with an online version of their pet. The "Skylanders" figures, though, become an integral part of the game because they store their characters' entire history inside.

"It's DNA-level play," says Eric Hirshberg, CEO of Activision Publishing. "How many times have you wished you could bring toys to life?"

Hirshberg calls it the "first true cross-platform game." That means you can play the game on the Wii, the Xbox 360, the PlayStation 3, the Nintendo 3DS, online and on the iPhone and the iPad.

Billy Pidgeon, an analyst at M2 Securities who follows video games, said the concept is "very risky, but if it pays off, it's going to pay off big."

It's risky, for one, because there's no real way to tell what will drive kids and parents to a holiday feeding frenzy in the way Tickle Me Elmo did in 1996 and the Nintendo Wii did a decade later. It's also a relatively new foray into the world of kids' games for Activision, best known for its "Call of Duty" warfare shooters and the grown-up fantasy fighter "World of Warcraft."

Jeff McKinney, video game editor at Time to Play Magazine, said he played the game extensively over the summer and liked it. "It's a cool concept but if the game wasn't good, it was going to be a novelty."

Spyro has been around since the late 1990s, having gotten its start on the Sony Corp.'s PlayStation console. Activision is trying to breathe fire into the series by combining it with real-life toys.

It helps that Joel Cohen and Alec Sokolow, two of the screenwriters for the original "Toy Story," are the writers of the latest game. As the story goes, Spyro and nearly three dozen other characters have been shrunk and frozen by an evil creature called Kaos. Their task: Battle, collect treasures and solve puzzles to save the world from Kaos.

"It's important that the toys were alive," says Yale Miller, producer at Activision. "Not just a piece of plastic manufactured somewhere."

Activision is also throwing its full marketing blitz behind the game. Although it won't say how much it's spending, analysts estimate it's at least in the tens of millions of dollars. Toys R Us has included it in its list of 15 "best toys" for the 2011 holiday season alongside Air Swimmers, the helium-filled, radio-controlled flying fish, and Leapfrog's LeapPad Explorer.

The toys use RFID technology, used by retailers, drug makers and shipping companies to track goods, to store information.

The game is rated E10, meaning it's suitable for everyone over 10.

If it succeeds, other game companies will likely follow. Nintendo, with its beloved Mario characters - not to mention Pokemon - is a likely candidate.

"I'm surprised they haven't done it yet," McKinney says.
Comments