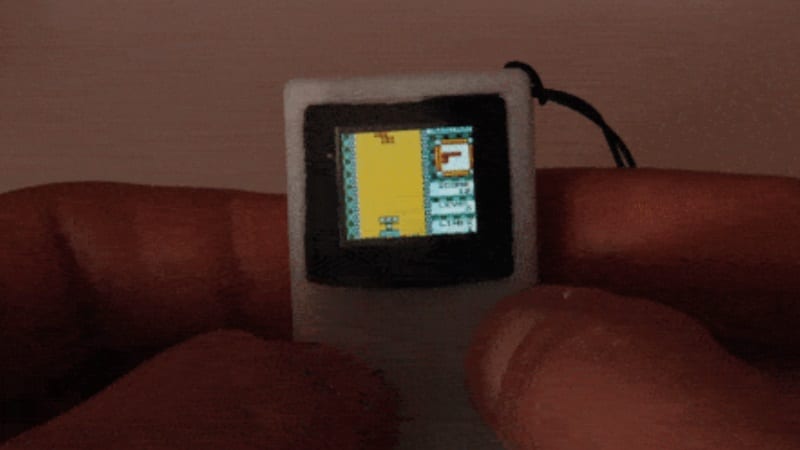 Gaming consoles have made significant progress in the last two decades, but it would be unfair to say that the original gaming devices ever fell short in terms of providing entertainment. The portability of the original Game Boy Color is still impressive today, and its battery life could easily put many modern devices to shame. Interestingly, a hacker has managed to further increase the portability of the device to such an extent that it could be made into a keychain.

A participant of 2016 Hackaday SuperConference, going by the name Sprite_TM, showcased how he was able to develop a fully functional Game Boy Color in such a compact size, reports Hackaday. The developer started out by opting for a 96x64 pixels OLED display just under 1-inch in size to replace the original 2.32-inch 160x144 pixels colour display. He then decided on a speaker less than 1 cm in diameter, a 150mAh lithium-ion battery, and an ESP32 chip (in the form of an ESP-WROOM-32 module).

Sprite_TM had trouble in terms of software as most emulators are developed for a full computer system but despite ESP32 being a capable chip, it couldn't handle them very well. He therefore decided to test out old emulators meant to be run on any system and finally settled on GNUboy. After reducing the tile-cache to about 46KB from 128KB on GNUboy, Sprite added features to allow users to adjust brightness, volume, and load ROMs from the display.

Due to the lack of mass storage on the device, it uses Wi-Fi on the ESP32 chip to create an access point that enables ROMs to be uploaded from a smartphone or computer via a webserver. Sprite_TM details several obstacles he faced making the keychain-sized Game Boy Color to work, from an overheating speaker to increasing program memory with an external flash chip.

Considering that the hacker found several ways around various problems and was able to develop a fully functional compact device that can run ROMs, the achievement certainly deserves admiration. Sprite_TM didn't stop there, and even used a VNC client to make his keychain-sized Game Boy Color run SNES games, the original Doom, and even Witcher 3 remotely