Yakuza 6: The Song of Life Promises to Be as Entertaining as Yakuza 0

For many, Yakuza 0 was the entry point into Sega’s long-running Japanese gangster series, a game we considered so good, we awarded it a perfect score. This was followed up by Yakuza Kiwami which was a solid remake of the very first game that originally graced the PS2. Naturally, expectations are high for Yakuza 6: The Song of Life.

Before you ask no, Yakuza creator Sega hasn’t forgotten how to count. You see Yakuza 0 was meant to be a prequel to existing titles. Yakuza 6 carries on from where the last game - Yakuza 5 for the PS3 left off. Suffice to say, while 0 and Kiwami cater to new fans, Yakuza 6 is one for those that have stuck with the Yakuza games from their earliest days. We checked out a demo for the game available on PSN that originally released around the time of its Japan and Asia debut in December 2016 to find out what to expect.

Yakuza 6 sees protagonist Kazuma Kiryu apprehended by the police for his crimes as a Yakuza, member of an organised crime syndicate. Choosing not to resist arrest, he spends three years in prison. On release he finds his adopted child (from the many he fostered) Haruka missing.

After a quick tutorial and rather lengthy exposition that’s par for the course from the franchise, you’re let loose on the familiar streets of Kamurocho. And it’s here where a host of changes are evident. Particularly if your starting point was Yakuza 0 or Yakuza Kiwami.

For one, Kamurocho look gorgeous in its modern day setting. From restaurants to bars and arcades, there’s density and depth that has you wanting to explore every single nook and cranny of the game world. It might not have the neon-lit hues of the 1980s-fuelled Yakuza 0 or the late 90s feel of Yakuza Kiwami, but the contemporary look suits it well. More so when you also get a first-person mode to play around with. This lets you immerse yourself in the minutiae such as reflections in puddles of water or convenience store shelves. It gives you a heightened sense of the attention to detail put into the environments which is a fantastic touch.

Along with this are other current day additions like a smartphone. Kiryu uses a variant of the Sony Xperia smartphone line. You can take pictures of your surroundings (yes, even selfies), answer messages with stickers, and even partake in challenges. Here too, there are intricacies like how gangsters would try roughing you up if you’re taking a selfie in their vicinity or how NPCs would react if they’re in the frame with you. 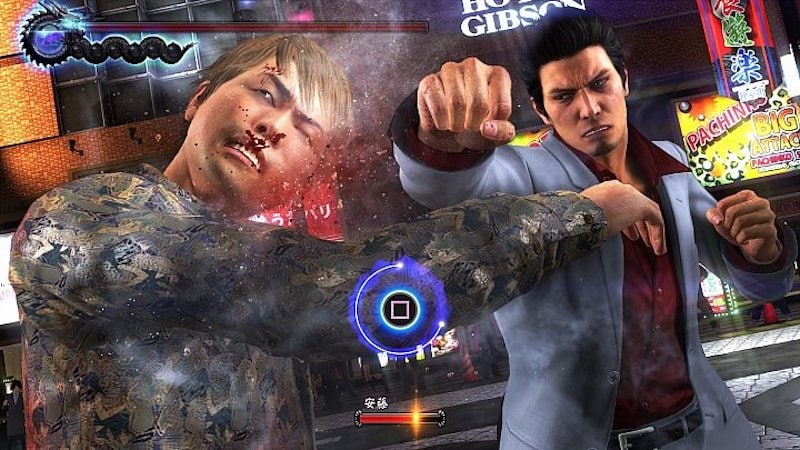 And speaking of gangsters, they’re plenty. Street thugs galore pepper the narrow bylanes of Kamurocho and getting to a fight is as seamless as it’s ever been. There’s no transition screen before squaring off with them, making the action feel all the more immediate. All the usual combos and tricks from past games work, like being able to take a bike to the head of an enemy and it looks and feels as satisfying as ever.

Throw in quick time events that make combat all the more visceral and combat is as entertaining as it’s been in past entries, even if your foes don’t explode currency at the end of battle like they did in Yakuza 0. The combat doesn’t appear to have as much depth as that game. You’re stuck with a single fight style as opposed to three from Yakuza 0, although it’s surprisingly fluid with slick animations and gruesome finishing moves.

So far, our concerns with Yakuza 6 are minimal. On our PS4 Pro there some cases of aliasing or jagged edges that break immersion in what is by and large, a great looking game with slick animations, lighting and effects. Since this is based of an early demo, Sega should rectify this in time for its Western release.

Overall though, Yakuza 6 leaves a strong impression. Granted it lacks the combat variety of Yakuza 0, but it manages to cram in more detail, exploratory elements, and seamlessness that could make it as entertaining. As it stands, we’re looking forward to our next visit to Kamurocho when Yakuza 6 is out on March 20 this year.

Yakuza 6: The Song of Life Promises to Be as Entertaining as Yakuza 0
Comment