The WWE might be associated with angry men and dated stereotypes but wrestling trio The New Day seems to be changing this, one gimmick at a time. Incorporating props such as trombones and unicorns into their act, Kofi Kingston, Big E, and Xavier Woods sure aren’t your average wrestlers. So when Gadgets 360 recently caught up with the the longest running tag team champions in WWE, we started by asking what next.

“I don't think that we ever plan. These things just happen. The unicornification of New Day just kind of happened,” says Kofi Kingston. "Woods actually had the idea having us on a t-shirt all on the back of a unicorn and then from that, the horn were born and putting their index finger on their head acting like unicorns. And now you have Starbucks with their Unicorn Frappuccino capitalising off our stuff here but the unicornification of the world is in full effect right now.”

The Trio is known for erudite dialogues and promos that borrow from social media trends. This tends to make its act a whole lot more contemporary and fresh. Despite the WWE’s flair for the dramatic, it’s never managed to be this current. So much so that it goes against the grain of what most have come to expect from the WWE. This made us wonder how often The New Day is at loggerheads with WWE’s writers.

“We have a long leash for sure. That's taken time to get trust from the higher ups and people of importance. But yeah, we don't write everything," says Big E. "A lot of times we're given scripts and we disagree with the script's directions and we have some leniency to retool. A lot of times it's 'hey we need an overhaul and none of it works' and sometimes it's just a few tweaks here and there."

"We've been very fortunate. A lot of talent really don't have that ability to just say 'hey I want to rewrite this promo' but it's really helped us," he adds. " And one thing we've noticed too is that as much as we - as a company- try to attach ourselves to pop culture, we felt also that a lot times they were a little outdated or a little bit, outside of their window of freshness.” 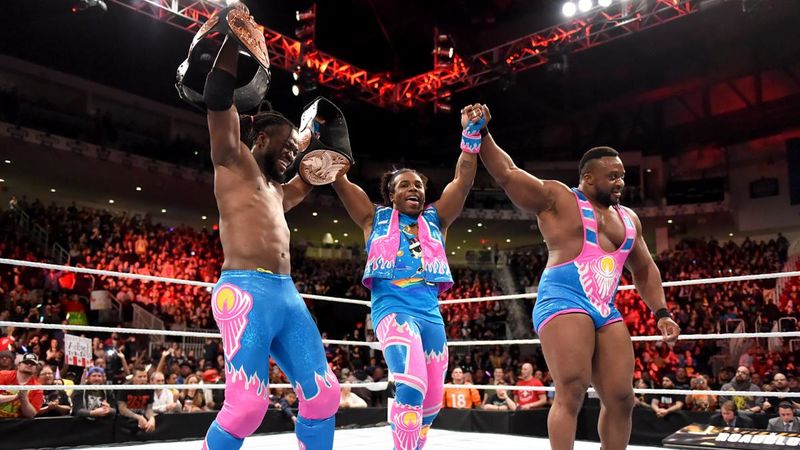 “We're on Twitter, we're on Instagram, we like viral videos. It's something we felt was needed in WWE. Something that was contemporary, something that was just hot on Instagram or Twitter or when Vine was still a thing, we wanted to implement that stuff immediately," Big E explains. "Cause that's the stuff we were just in the car buzzing over that made us laugh so why not use that the next day? I still vividly remember the hubbub over the Steph Curry shoes happened and when we talked in the car I think, it was a day later and we were in New Orleans and Kofi was all like 'alright I gotta get these shoes' and we wore them on TV and then we had to clown them for it."

"But it's things like that people enjoy. People want stuff that's up to date, that feels current, that feels fresh, that's in the zeitgeist, that's still being talked about so that's an element that we've tried to use to separate ourselves and we take a lot of pride in that,” he says.

And its this emphasis on creativity and being in the moment that has shaped the current era of wrestling to be The New Day’s favourite. Or the unicorn era as they call it.

From Federation to Entertainment, WWE's Journey is Mirrored in Wrestling Games

“My favourite era is the now. The unicorn era of the WWE. That is The New Day," says Kingston. "We got to host Wrestlemania 33. We went from being the most hated group. Two years ago at Wrestlemania we were booed out of the building. The entire arena was telling us that we sucked and then you fast forward two years, and we were dressed up as Final Fantasy characters and we had an ice cream bicycle.” 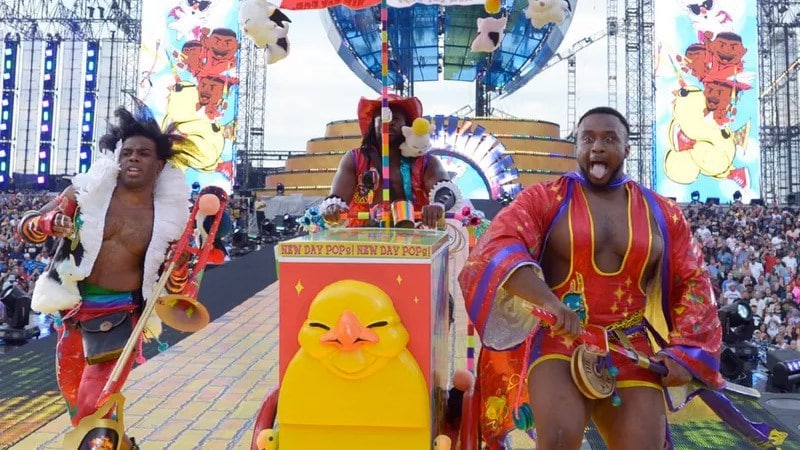 “We were riding down this enormous ramp, and you know, just doing all kinds of things that if you would ask us two years ago, or asked anybody else that they thought we'd be doing, you wouldn't have thought that we even survived," he adds. "So for me, this is my favourite time in wrestling because we're able to do some very unique things.”

“But we're sure going to push it,” quips Kingston.

The conversation moves onto to video games. Aside from Xavier Woods’ YouTube channel UpUpDownDown, where Kingston and Big E show up from time to time, they’re all avid gamers. To the point where the WWE locker room these days resembles an arcade.

“At one point we had a show in Canada. We had my PS4, Xavier's PS4, and we had the Switch in the middle of the room someone else had some handheld systems," reminisces Kingston. "So you walk into the locker room and all you see are consoles. It's almost like an arcade. And we actually had the VR too so we you walked in and its the closest thing to an arcade right?"

"When we were in kids, we went to arcades and we would play video games," he adds. "That's kinda lost right because everyone plays online. It's really pleasant to see, when you walk into a WWE locker room game stations all around the walls which kinda brings us back to the days of arcade.”

The Nintendo Switch’s offline co-op capabilities further add to this, he believes.

“It's a party type system. To me, it's the best when you have a group of people who can play. We're always with each other,” he says. It’s not just gaming though. The social aspect of video games and the discussions that swirl around it are a big draw for The New Day, particularly as a means of bonding with fellow wrestlers and crew members.

“I think one of the cool things too that video games have helped us bond. Not just as a trio when we first started but I got to know Rich Swann really well because we would just sit down and play video games and play UFC 2 and that was a lot of fun," says Big E. "A lot of the crew's into it too. We had something to talk about, we got to know each other and it was natural and organic and I think that's what video game culture often does. It brings people together and we can all sit down and enjoy a video game and get to know each other that way.” 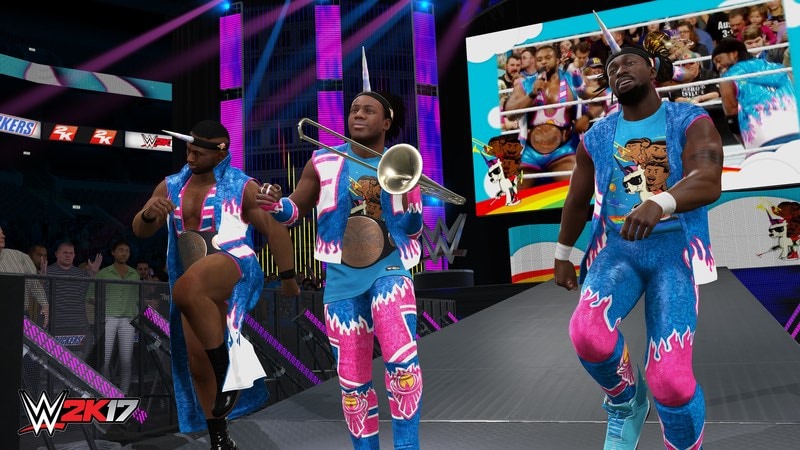 On the topic of video games, The New Day is a part of the game WWE 2K17. They're the reigning tag team champions, but Big E is rated at 85, Kofi Kingston at 86, and Xavier Woods at 83. It seems quite low and they agree.

“The ratings are way too low. It should be 99s all around. The New Day does things that other teams don't do," says Kingston. "So that in itself should earn us a 99 rating. It might be a glitch in the game where they rated us a little too low and someone didn't catch the fact that we should all be 99s. Look at all of us we cover all the bases you have Big E with the strength, Xavier with the smarts, myself with the athletics, we cover all the bases.”

Big E opines that even 99 would would be too low, suggesting the developers take a cue from UFC 2.

“If you look at how Mike Tyson's rated in UFC 2 where they don't even have ratings for him, but his power his otherworldly," he says. "You can't even put a number on him. That's what we need to be. Don't even put a rating on us. Our rating is up in the clouds. You don't know what it is, but man we're powerful. Whatever it is we're doing, I can't rate it.”