Warcraft 3: Reforged May Be Blizzard's Most Ambitious Remaster Yet

After StarCraft Remastered, Warcraft 3: Reforged is Blizzard's second effort at updating one of its older games though the approach this time was radically different.

"StarCraft was an obvious one, it's still broadcast on TV [in South Korea] and you have these nice beautiful HDTVs when you're watching a game that's rendered in 640x480, it loses some of the appeal," Sousa explains "So for that we were definitely thinking of upping the resolution so it'll be exactly the same game but it'll look better."

While StarCraft was fuelled by the competitive scene surrounding the game, the reasons behind choosing Warcraft 3 were aplenty.

"We loved what we did with StarCraft Remastered but we felt with Warcraft 3 because it was the first 3D game that we had, we could go further with the artistic styling," Bridenbecker says. "Because of all the lore and history that has been developed as a result of World of Warcraft, we actually have the ability to take some of that and fuse it with Warcraft 3 so we can augment that experience as well." 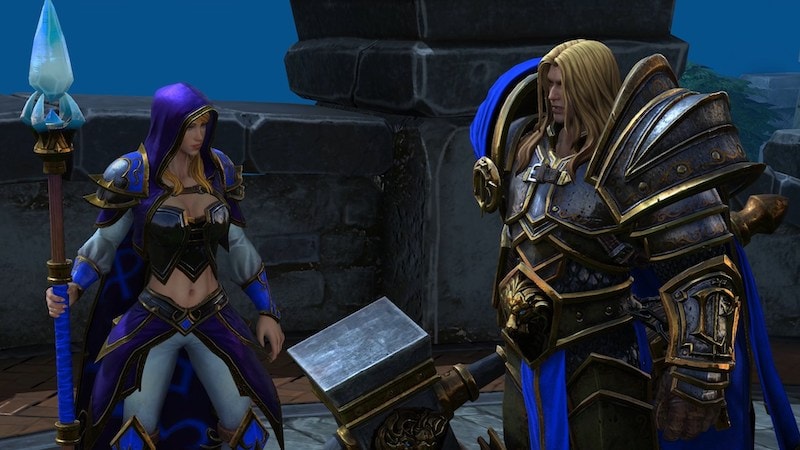 An example of this is the Culling of Stratholme level in Warcraft 3: Reforged versus the original. It's styled similar to the locale in World of Warcraft, bereft of oddities like dolphin statues and a zoo that were present in the original.

"We wanted to heal up some of those inconsistencies and build a bit of a bridge without fundamentally changing the archtype of what made Warcraft 3, Warcraft 3," Bridenbecker says.

Unlike StarCraft, however, Blizzard wasn't dependent on its fans mailing it the original Warcraft 3's gold master — the final, finished version of the game. Acquiring the necessities to get Warcraft 3: Reforged off the ground was less of a challenge.

"We did a better job, I think I was doing the IT on StarCraft so it was my fault for losing it [gold master], so I fired me and we brought someone else in and they did a much better job at preserving things," Bridenbecker jokes. "Finding source code, finding data, finding assets, that was less of an issue with Warcraft 3."

"The mission is that we have to preserve compatibility, to make sure the game just works with all the maps that are out there from the custom mod community with all the campaign maps, all the multiplayer maps, all those have to come along for the journey as we go and we reforge the game," he says. "That's the biggest challenge, just adapting of our lineage as well as the art tool chain."

On the topic of Warcraft 3: Reforged's art tool chain, Sousa explains what exactly has changed.

"The original Warcraft 3 was done in an early version of 3D Studio Max," he says. "I'm not even sure it was 3D Studio Max, might have been version R4 or something. We moved into Maya and had to recreate a whole new toolset to actually speak to the game and that the game actually recognises it. We found that some of our problems are coming from taking these models that were created in Max and scaled in Max and we're bringing them to Maya to see their actual scale, which then kind of changes."

What this meant was, the size of units and heroes in Warcraft 3 was different in 3D Studio Max and Maya, forcing the developers to rediscover how certain aspects of the game were created.

"For example, a unit is 100cm but we get into the game and it's either too huge or too small," he says. "The challenges we're trying to figure out is how they did things and why they did things because it's very inconsistent. Whoever made this model is working in a completely different world than the guy who made another model, so we're unifying all of that." 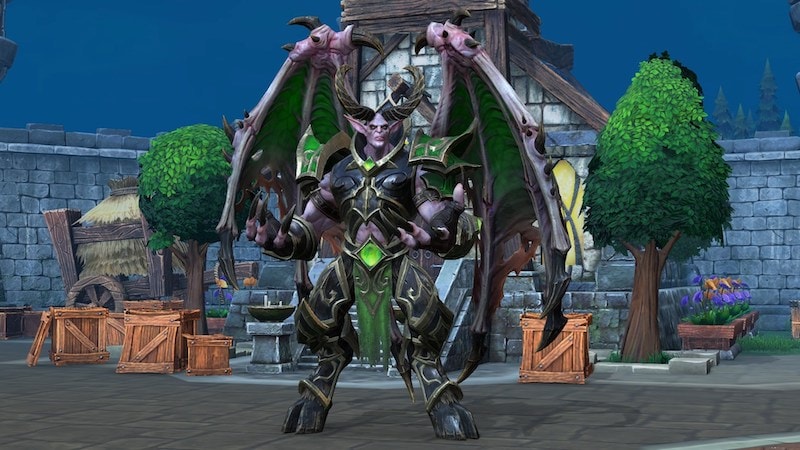 Bridenbecker tells us that a lot of the original Warcraft 3 developers are working on Warcraft 3: Reforged. Although he could not comment on an exact number of Blizzard staffers working on the game, he did say that the presence of its original creators went a long way in solving some potential roadblocks that other remasters tend to suffer from.

"We do have some of the original, veteran Warcraft 3 developers including Jay [Patel, Lead Programmer Warcraft 3: Reforged] who was one of the engineering leads of Warcraft 3," he says. "At times we get to point at Jay and say, 'You made it, it's your fault if you can't figure it out.' I think it's a bit of a personal mission for him to really want to solve some of these things. So when he's dropping orcs in the game and the orcs are a thousand feet tall because the math was done in a funky way, well fundamentally, 'Hey Jay that was your fault.'"

This isn't all. With plans to make Warcraft 3: Reforged compatible with the original Warcraft 3, the art team have to ensure that the number of frames of animation are same in both versions of the game.

"If a unit had an attack that was only 20 frames long which is about two-thirds of a second we had to make sure that the new character had the same length of attack so we wouldn't go out out of sync," he says. "So we had to go through our entire animation list and listed every animation, every frame count and said that these have to be the same, what it looks like can be different. If a unit has an overhead attack or a stab that's fine but it has to fit within the frames that we have. That was our main limitation."

Furthermore, every asset in the game is getting the HD treatment. Despite Warcraft 3's age, there's a lot that needs to be redone Sousa admits.

"We did the math of every asset in the game, there's around 4,000 assets that we're redoing," he says. "And then on top of that we're redoing every unique one. Once we get our main 4,000 done then we'll go back and maybe have another 1,000 units or things to do so there's a lot of work but we do want to focus is on getting every asset in the game to be up-ressed and once that is done we can go back and up-res additional assets that we want to put in."

There's more. The team want to go beyond what we know Warcraft 3 to be, adding fresh models with slight visual differences.

"Anything that has a unique name in Warcraft is going to have a unique model associated with it," Sousa reveals. "For instance Arthas who is the death knight will have a different looking death knight. If you put Arthas and another death knight unit together and they don't look exactly the same. That's going to go across to creeps and critters too, so if we have five different murlocs they're all going to look completely different rather than having the same model repeated just tinted green or purple. That's one thing we're excited about is getting so much more into the game visually." 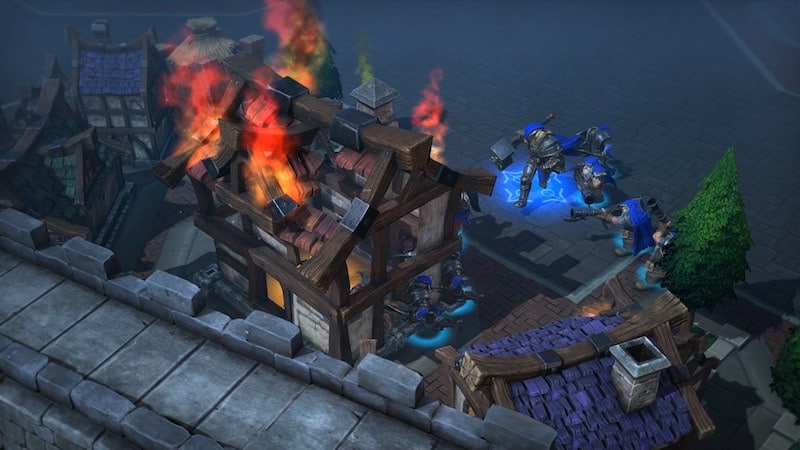 Moving on from Warcraft 3: Reforged's visual rework, we wondered how the game would support the vast swathes of user-generated content the original Warcraft 3 was known for.

"The way that it's being set up is so long as the map was largely created using stock Warcraft 3 assets, the ones that we made for the most part, those just bloat up and they get the modernised treatment," Bridenbecker says. Though if it was a map or modification that did not use Blizzard-sanctioned assets there's a fix in the works too.

"Now if you were to go in and change out the assets and use something different, that actually introduces a different problem because we had no insight into what that model looks like and how to reshape it," he says. "But we would give you the tooling and a sort of a style guide and instruction manual on how to incorporate whatever those assets happen to be to modernise it. So for the most part, the goal for the team is that the maps will just work and now there are a lot. If we can get the majority of them, I think we'll be in a real good place."

Finally, we had to ask if Blizzard has plans to make the original Warcraft 3 free, just like it did with Starcraft when Starcraft Remastered was out.

All of this suggests that Warcraft 3: Reforged may just be Blizzard's most ambitious remaster to date. There seems to be a borderline obsessive attention to detail and it bodes well for potential retellings of the company's other franchises such as Diablo. That said, with a potential Warcraft 3: Reforged beta rumoured for early next year, we may not have to wait too long for a taste of what's to come.

Warcraft 3: Reforged May Be Blizzard's Most Ambitious Remaster Yet
Comment