Nintendo may have stopped its sharp fall. To start climbing again, the video game company is expanding its playbook.

But the other release, a collection of toy figurines that will interact with the game, brings the company into an already flourishing market - one that allows it to take more advantage of popular characters like Mario and Luigi.

Nintendo, long a leader in the video game industry, needs a new sales hit. The company reported a profit in its most recent quarter, but losses had piled up in recent years as consumers turned to less expensive games on smartphones and other mobile devices. And sales of Nintendo's latest console, the Wii U, have been underwhelming. Only 7.29 million units have sold since November 2012, compared with more than 10 million for Sony's PlayStation 4, which was released a year later.

Those struggles have led to calls for the company to move more aggressively into new product areas. With the figures, called Amiibo, Nintendo will be entering a toys-to-life market that grew 22 percent, to $425 million, in the United States in the 12 months that ended Oct. 14, according to the NPD Group, a market research company. Disney and Activision Blizzard dominate the sector, but analysts say there is room for Nintendo.

"You have this third player entering the market, with a huge stable of characters that are iconic," said Liam Callahan, a games industry analyst at NPD. "They may actually grow the category by targeting a slightly older consumer" - ones, he said, who grew up with those characters.

Toy companies had been trying for years to bridge the gap between physical and digital toys, applying different strategies but finding limited success. Mattel's Apptivity, in which players used toys to interact with mobile games, had a short run. Hasbro had better luck by working with the Finnish game developer Rovio on Telepods, an app that married Hasbro's toys with Rovio's Angry Birds franchise. Lego, the world's largest toy company by revenue, recently introduced Lego Fusion, which allows children to construct plastic brick buildings that are then incorporated into a mobile app.

But it took a video game developer to truly triumph with the hybrid concept. In October 2011, Activision introduced its first Skylanders game, Spyro's Adventure. It was a runaway success and led to the release of a new Skylanders game each year since. In 2013, Activision announced that the Skylanders franchise had topped $1 billion (roughly Rs. 6,173 crores) in revenue, with more than 100 million toys sold in the United States alone.

The Disney, Activision and Nintendo figurines all use the technology known as near-field communication to send signals to a device connected to the game console. For Disney and Activision, the toys are required to play the related games. Starter kits are about $75, and figures start at about $13.

The Nintendo toys are not required to play the related games but instead offer bonus features. Each character is $13.

Activision's approach has been to add new features and types of toys to each installment. This fall, the company released Skylanders Trap Team, in which players can insert a physical crystal-shaped item in a base to trap virtual villains.

"When you have strong competitors, you have simple strategy: Don't focus on them," said Eric Hirshberg, the chief executive of Activision Publishing. "Our focus is on innovation."

Disney followed in 2013 with its own platform, Disney Infinity, which relied heavily on Pixar properties like "Toy Story," "Cars" and "The Incredibles" for its game. 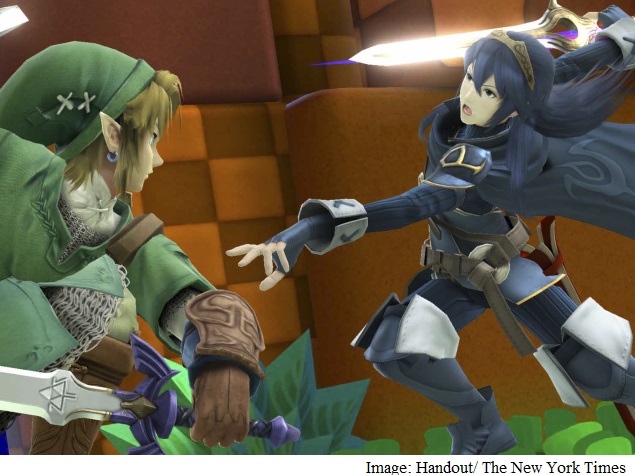 This year, Disney tapped Marvel superheroes like Iron Man, Spider-Man and Guardians of the Galaxy for the new iteration of the game, and rumors are that the Star Wars franchise will soon follow.

"The key differentiator with Disney Infinity is the ability to leverage the Disney vault," said John Vignocchi, an executive producer at Disney Interactive Studios, the publisher of Disney Infinity. "It's a treasure trove of intellectual property, including legacy I.P. like Peter Pan or Tinker Bell, Aladdin or Jasmine and contemporary hits like Monsters University and the great content from Marvel."

Disney Infinity was one of the top games of 2013, according to Vignocchi, with $500 million (roughly Rs. 3,086 crores) in global retail sales.

Nintendo is eager to build its own franchise of interactive toys.

To that end, it released 12 Amiibo figures of popular characters like Donkey Kong, Mario, Pikachu and Yoshi to interact with Super Smash Bros., a crossover fighting game in which players can pit various Nintendo characters against one another in an arena battle.

"We are not a 'me too' company," said Cindy Gordon, vice president for corporate affairs at Nintendo of America. "We've been thoughtful; we wanted to make sure we had differentiation."

Nintendo is counting on the game and the Amiibo figures to bolster the Wii U. Sales of the console more than doubled, to 610,000 units in the quarter that ended September, compared with the same period a year earlier. The increase was attributed partly to a weak yen, which made Japanese products cheaper to buy, and to strong demand for Mario Kart 8, which was released in May.

But Michael Pachter, a research analyst at Wedbush Securities, had his doubts about the extent of Amiibo's success.

"It's a great idea, but it's limited to Wii U owners," he said, predicting that Nintendo would gain only about a 10 percent share of the toys-to-life category.

Disney and Activision figures can be used on all consoles, including the Wii U.

One of Nintendo's strengths is its intellectual property, which includes characters like the Mario brothers and Donkey Kong. Some experts say those assets are worth at least $4 billion, and the company keeps tight control of its top characters and games, releasing them only for its gaming devices.

But Pachter wondered whether Amiibo was just a gimmick that would prolong Nintendo's struggle. The bigger problem, he said, was the Wii U.

"It's already an anachronism," said Pachter, adding that the console was losing support from third-party publishers of popular games like Grand Theft Auto, Call of Duty and Destiny, which are not available on the Wii U.

Nintendo should strive to be more forward-thinking, he said: "Their strategy is looking in the rearview mirror to see what got them there."

One in Six Smartphone Users The Victim of Cyber-Attacks: Study
Obi Alligator S454 With 4.5-Inch qHD Display Launched at Rs. 6,450