Titanfall 2 PC Looks and Plays Like the Real Deal

Two and a half years since the franchise debut, Respawn Entertainment has given us the sequel to its mech-exoskeleton-equipped first-person shooter in Titanfall 2, available now for PlayStation 4, Xbox One, and Windows PCs. If you are a PC gamer though, then the biggest question – possibly more than the review itself – is how well will the game run on their system?

That’s what we are here to answer. First up, here’s what Respawn listed as the requirements to run Titanfall 2 on your PC:

The rig we tested Titanfall 2 on

Back when the specifications were announced, the developers noted that the minimum requirements wouldn’t necessitate putting all settings to low, but would in fact provide an around-60fps experience at “1600x900 resolution with most details turned on”. Our test results are mostly based on a Founder’s Edition GTX 1060, but we did do some testing on a GTX 760 as well. With the GTX 760 installed, here’s what the game recommended on our native 1920x1200 resolution: 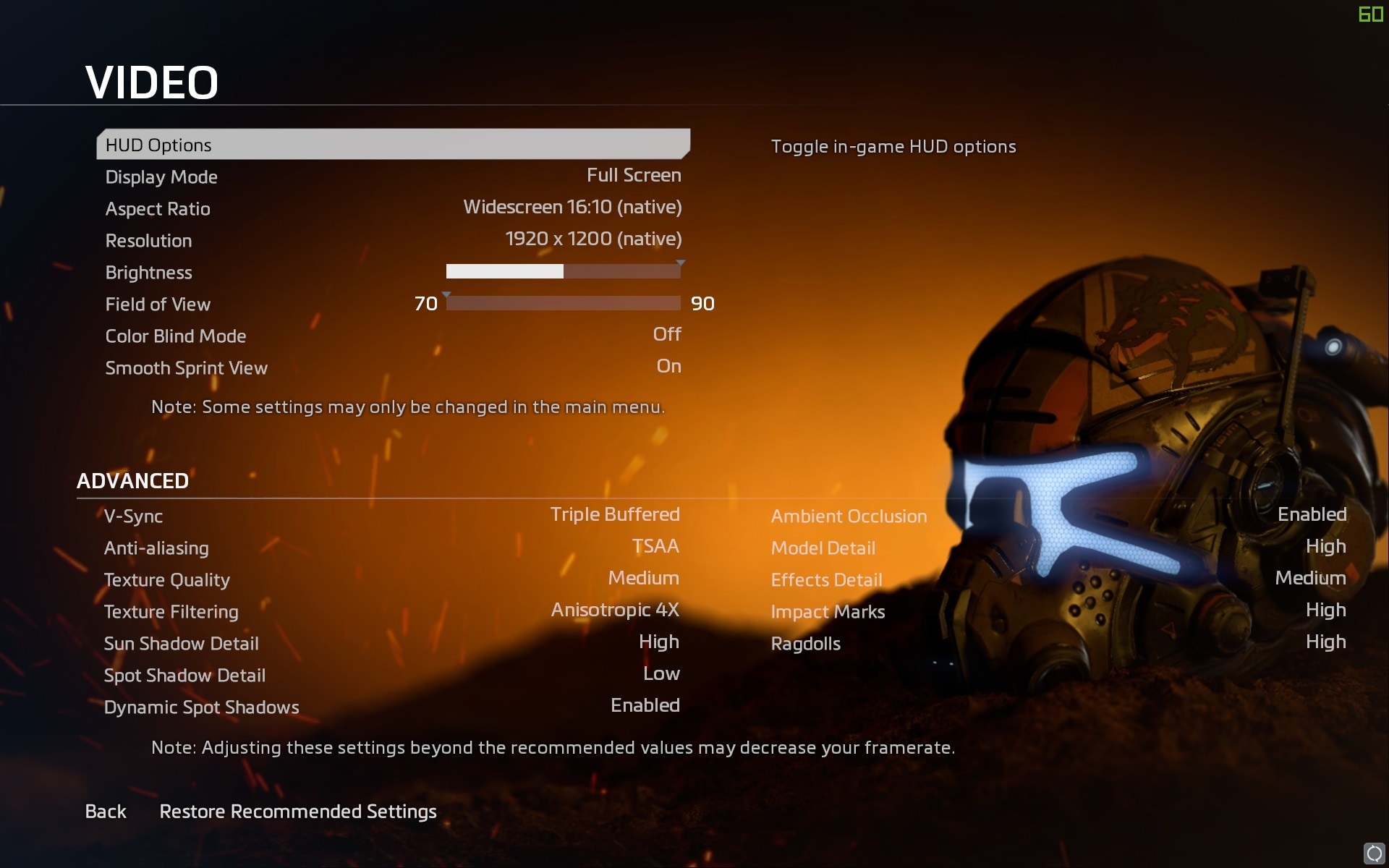 On the above settings, we had no problems with the frame-rate as the game ran smoothly between 40-55 fps throughout the tutorial and the first mission. Texture detailing, shadows, and reflections weren’t very impressive, but that’s the trade-off you have to live with if your system is around the minimum requirements. It’s completely playable though, and that’s down to good optimisation work on the developer’s end.

Plus, Respawn has given a ton of options to tweak – as you can tell from above – which is great if you do have the system power to push things up a notch. With the GTX 1060 installed, we could do just that. The game recommended the following settings for smooth performance:

Nvidia’s GeForce Experience utility, which provides optimal settings for games too, recommended that we take things even further up – changing both Sun Shadow Detail, and Spot Shadow Detail to Very High, and Texture Quality to Insane. We tried both the developer and Nvidia profiles to see if there was any difference, or impact on the performance, but the GTX 1060 6GB handled itself very well – delivering 60fps throughout without fail. 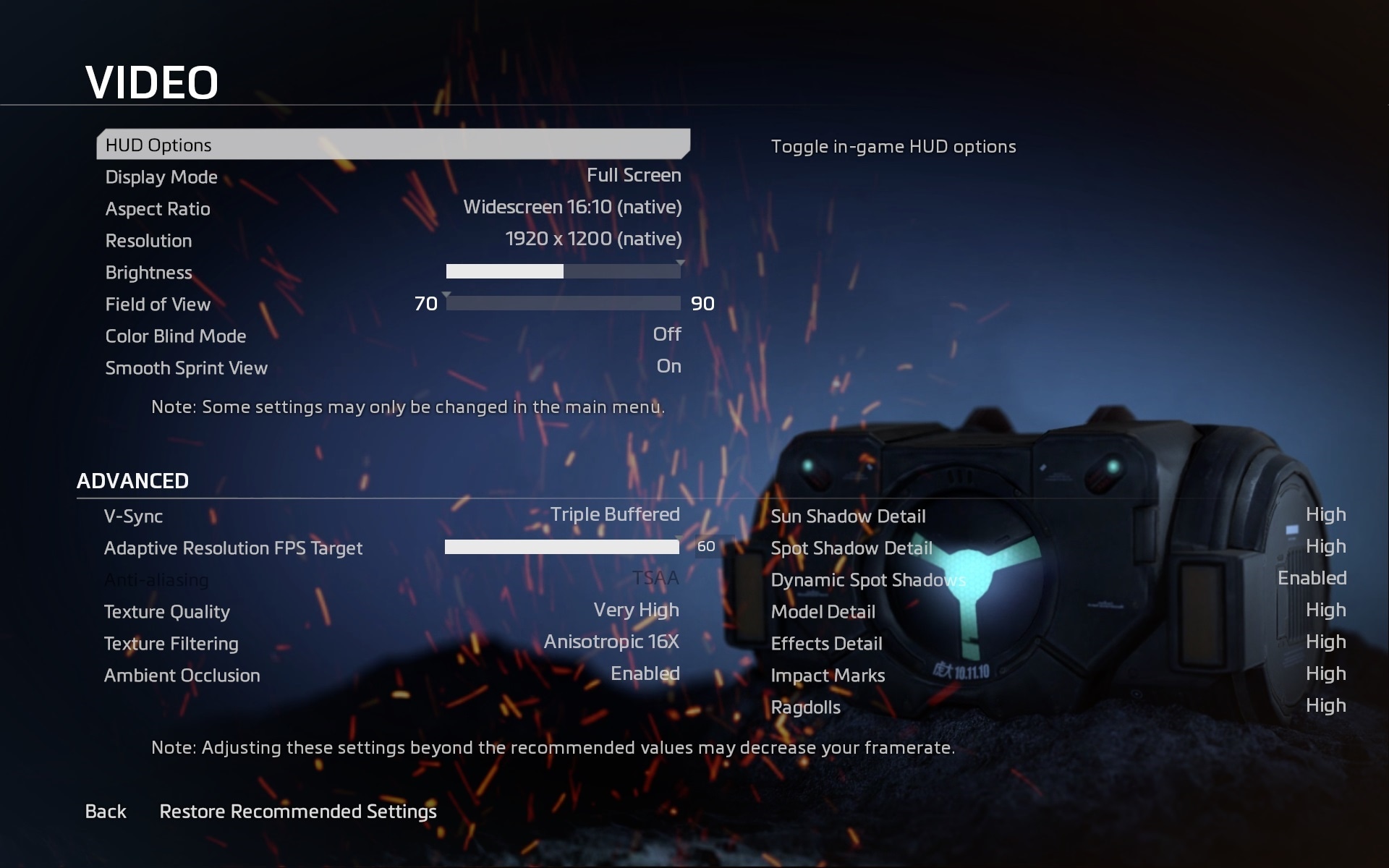 While textures on the ground, and reflections off weapons looked a fraction better on the higher Nvidia-recommended settings, the difference was too little to be told if you didn’t pause and look for it. Respawn said their aim with recommended specifications was to provide 1080p resolution with an average of 60fps or higher with details “nearly maxed out”, and our time with GTX 1060 6GB on 1200p resolution and every last detail maxed out showed that Respawn has done a commendable job with Titanfall 2 on the PC.

What’s great as well is that we didn’t notice any texture popping-in, even on higher field of view (FoV) settings, and there was no perceivable micro-stuttering – which can be very important in a fast-paced game such as Titanfall 2.

There are a couple of extras in the video settings menu as well. You can change the FoV to anywhere between 70 and 90, and the developers have also included a colour blind mode – for players with protanopia, deuteranopia, and tritanopia – which you don’t see very often.

Even in the controls department, there is a fair amount to play with. You can choose to play with either the keyboard and mouse, or a controller. Applying to both departments, the sprint function can be changed between Manual, Auto-Sprint, Auto-Sprint [Pilot], and Auto-Sprint [Titan]. The game does point out that you’ll lack fine control with auto-sprint on.

Mouse sensitivity is set to 5 by default, and you can input anything between 1 and 20, with six decimal places. There are options for mouse acceleration, and mouse inversion too. Titanfall 2 allows rebinding control keys to two different options for each function.

There are multiple options for players that prefer using a controller on the PC, be it changing button layout, sensitivity, response curve, deadzone, and vibration.

All in all, developer Respawn has done a great job with the PC version of the game. Will you be playing Titanfall 2 on the PC? If you have any queries, leave them in the comments below.

Further reading: Titanfall 2, Respawn Entertainment, Titanfall 2 PC requirements, Titanfall 2 PC specifications
Akhil Arora Email Akhil Akhil Arora covers entertainment for Gadgets 360, interviewing stars such as Christian Bale and Anurag Kashyap, covering series premieres, product and service launches across the globe, and looking at American blockbusters and Indian dramas from a global socio-political and feminist perspective. As a Rotten Tomatoes-certified film critic, Akhil has reviewed over 150 movies and TV shows in over half a decade at Gadgets 360. When he is not completely caught up with new film and TV releases, Akhil ...More
Delhi Air Pollution: From Air Purifiers to Ionisers, 5 Ways Technology Can Help