Spyder puts you in charge of Agent 8, a robot spider tasked with saving the world

Apple's subscription-based gaming service started with a bang back in September 2019, with a promise of regular game releases to keep the platform fresh and engaging. Things have slowed down a bit, with only a handful of launches every month in 2020. The platform, which costs Rs. 99 per month in India, is still excellent value with a good collection of engaging premium-grade games. For people stuck at home thanks to the COVID-19 pandemic, social distancing and global lockdowns, Apple Arcade is keeping things rolling with its latest release, Spyder, from developer Sumo Digital Ltd.

Spyder puts you in the role of Agent 8, a robotic spider that serves fictional British spy agency EP-8. Set in a retro-themed world, Spyder puts the player in various environments solving puzzles and problems, to diffuse various situations and save the world from evil organisation SIN. It's a family-friendly game that is suitable for anyone over the age of four years. We try out this new Apple Arcade game in the midst of the India-wide lockdown for some much-needed rest and relaxation. 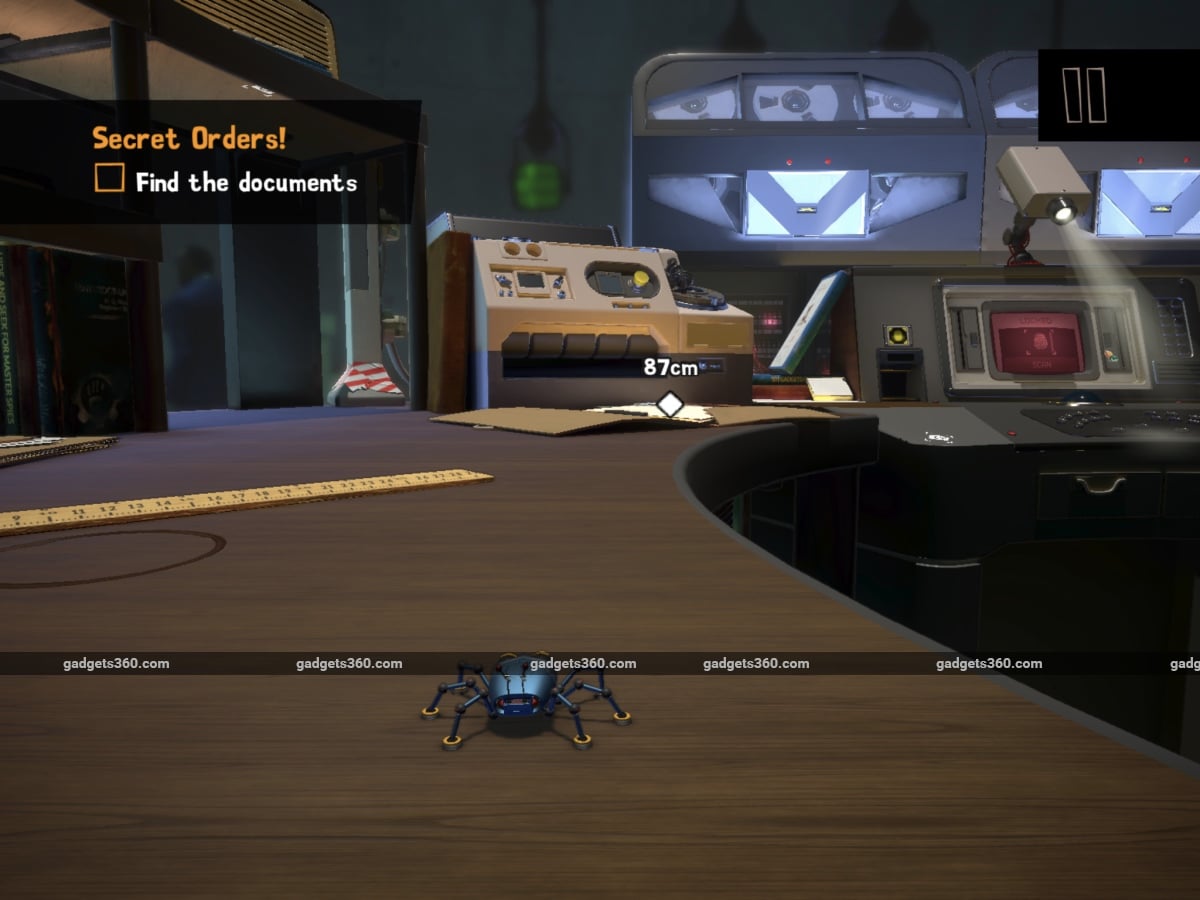 The protagonist in Spyder is Agent 8, a robotic spider.

The game starts off with an interesting premise; you're a spy, but not of the James Bond variety. Instead, you're a robotic, life-sized, rather cute little spider named Agent 8, working for fictional British spy agency EP-8. Your size and form naturally makes you well-suited for covert missions such as sabotaging bomber aircraft and repairing damaged space capsules. SIN, the faceless antagonist of the game, is up to all sorts of diabolical acts that it's on you and Agent 8 to put a stop to.

As a robotic spider, you have much of the mobility and abilities of a real spider, including the ability to walk on surfaces facing in any direction. Your size also lets you squeeze into the tiniest of spaces, and the fact that you're a robot means you can even carry out operations in environments hostile to humans, such as outer space.

You also have a variety of gadgets and tools at your disposal, including web splats, a grappling hook, and a laser cutter, which are used to negotiate the environment. This gives the game a bit of the retro spy thriller feel, while retaining the cuteness and child-friendliness of being a robotic spider with giant eyes and authentic expressions. The art design is charming with bright colours and pastel shades dominating, lending a cheerful look to the proceedings.

The game isn't a flat two-dimensional platformer; your spider abilities mean you can walk on surface facing in pretty much any direction. This means that apart from moving and interacting with objects, you also need to control the camera to see where you're going. This is the tricky bit, since the camera adjusts itself continuously depending on which direction you're moving in. Dragging your finger or thumb anywhere on the screen moves Agent 8, while adjusting the camera needs a two-finger swipe.

Unfortunately, two thumbs at either end of the screen doesn't work very well; you need your index and middle fingers to properly adjust the view. On a larger device such as the iPad mini (2019), this was occasionally a hassle, and meant that we had to keep adjusting our grip on the tablet.

Moving around is easy enough, and interacting with objects usually needs a short or long tap, followed by moving Agent 8 or rotating your finger on screen to adjust sliders or turn knobs. However, the game is a test of patience, since you're moving slowly and constantly having to work with the adjusted view. On a couple of occasions, these random view changes meant we accidentally walked into harmful situations, which was a bit frustrating. 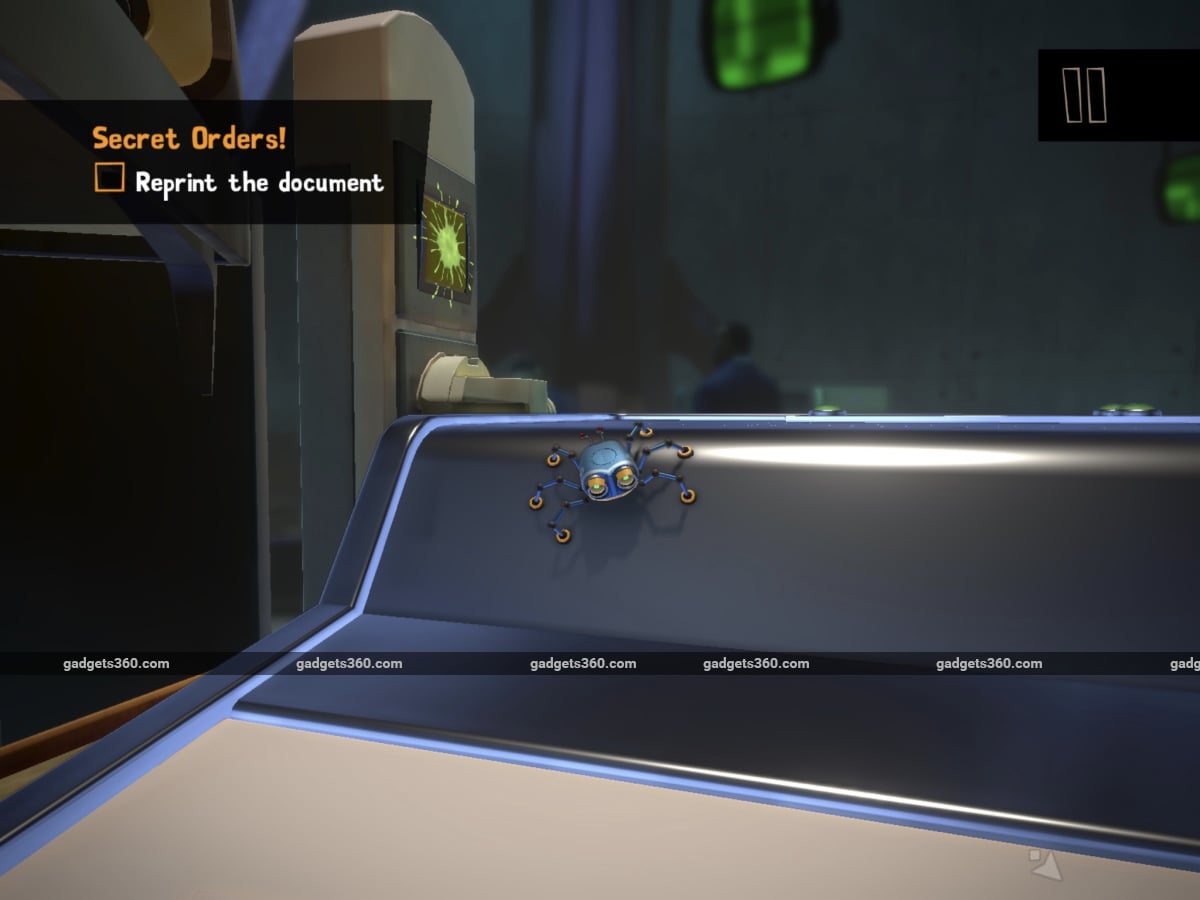 Agent 8 can walk on surfaces facing in any direction, just like a real spider

While you could consider Spyder to be a role-playing game, the core experience is exploration and puzzle solving; this is what makes this game so appealing to players of all ages. We loved the challenges the game threw before us; they were neither too easy nor too hard, and each level poses unique challenges based on the environment. We particularly liked the second mission after the tutorial, which had us fixing fuel lines and other components through interesting puzzles on a sabotaged space capsule hurtling towards Earth.

Each level in the game takes around 20-30 minutes to finish depending on how engaged you are. The tutorial gives you a good idea of the basic controls and premise, but later levels put forth entirely unique challenges that will take some though and effort to solve. While most levels aren't time-bound, some challenges did come up that needed us to think fast because of an enforced timer; one such situation was detonating a bomb mid-air while it was already hurtling towards its target.

Unlike typical spy thrillers that feature things more sinister, Spyder keeps things family-friendly by skipping on the violence. However, it does so while retaining the typical feel of a classic spy thriller; with the retro look having been captured well by developer Sumo Digital Ltd. Agent 8 is itself a visual combination of Wall-E-meets-steampunk, which will play out well with users of all ages.

The environments are visually beautiful as well, with plenty of colour and detail that gives this a typically console-game feel. Each level is usually represented by a large vehicle of some sort, such as an airplane, space capsule, and submarine. The game is best played on the bigger screens of iPads or on your Apple TV, considering that Spyder is easily one of the best-looking games on Apple Arcade right now. 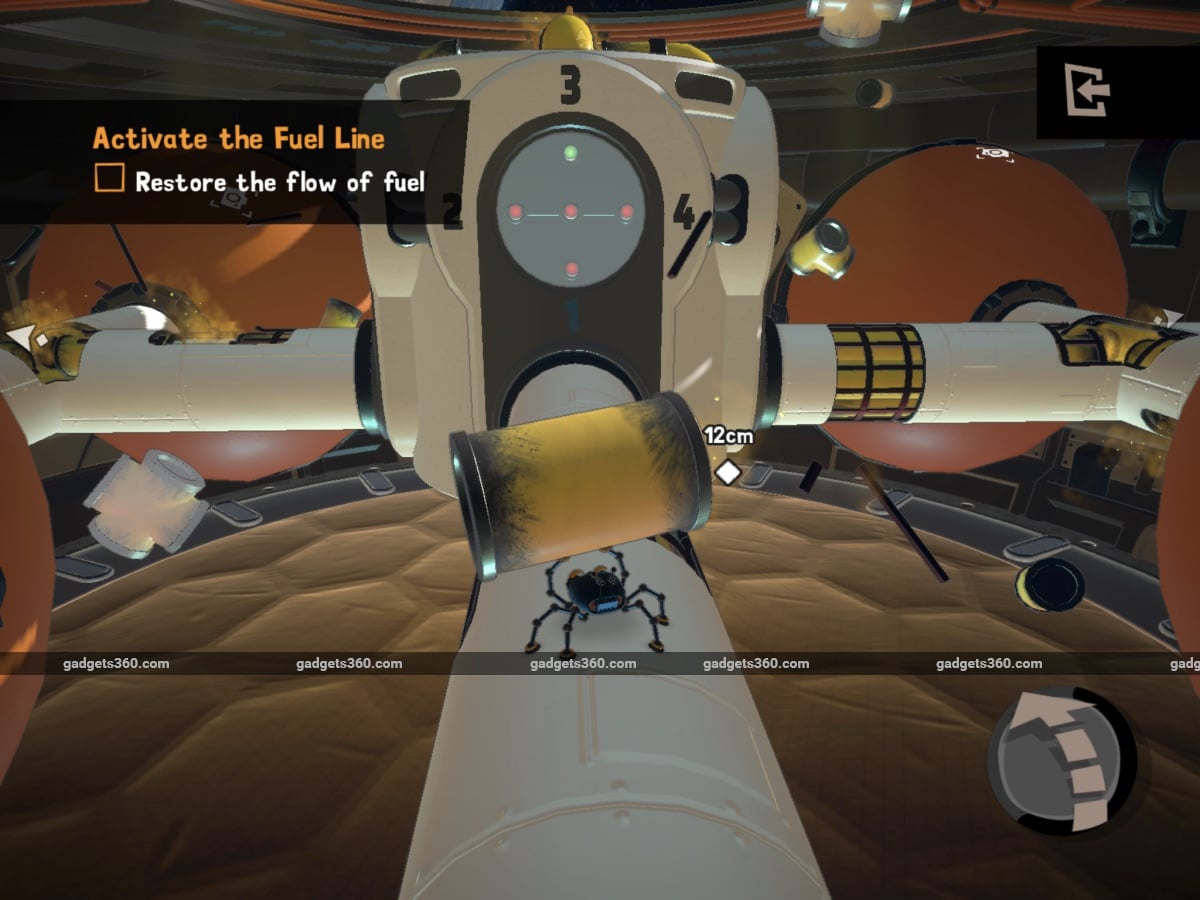 Should you play it?

Apple Arcade's initial blitz of games at launch came with some impressive titles including What The Golf?, Sayonara Wild Hearts, and Sneaky Sasquatch. However, the subscription service hasn't produced as many high-quality titles as often since then. This is what makes Spyder such a refreshing new release; it's a splash of sunshine for the platform at a time when we're battling a threatening pandemic of global proportions, forced to stay at home, and need it the most.

Further reading: Apple, Apple Arcade, iPad mini 2019, IOS, Spyder
Ali Pardiwala Email Ali Ali Pardiwala writes about audio and video devices for Gadgets 360 out of Mumbai, and has covered the industry for a decade now. Ali is a Senior Reviewer for Gadgets 360, where he has regularly written about televisions, home entertainment, and mobile gaming as well. He is a firm believer in 4K and HDR on televisions, and believes that true wireless earphones are the future of the personal audio industry. Ali is available on Twitter as @AliusPardius and on email at alip@ndtv.com, so do send in ...More
Huawei Watch GT 2e Smartwatch With Up to 14-Day Battery Life, 100 Workout Modes Launched: All Details
What India Should Learn From China to Resolve Home Delivery Issues During the Lockdown