Can Sea of Thieves be the Xbox One's No Man's Sky?

Sea of Thieves for Xbox One and Windows 10 is Microsoft’s first big game of the year. In the run up to its March 20 release date, we checked out the Sea of Thieves beta and came back impressed - and wary - all at once. Here’s why.

Developed by British game developer Rare, Sea of Thieves is a pirate-themed action adventure game set in an open-world with multiplayer cooperative elements, which is basically the grown up way of saying you play as a pirate who can sail on the high seas with your friends, and shoot them out of cannons. Yes, much like Rare’s past efforts, there’s a cartoonish, whimsical twist to the proceedings that manifests itself in a gorgeous art style and exaggerated physics that allow for some creative liberties such as the presence of mermen, skeleton pirates, and the afterlife serving as a creepy vessel known as the Ferry of the Undead.

Suffice to say, if you were expecting something remotely similar to the naval battles of Assassin’s Creed 4: Black Flag, or the intense offshore encounters of Assassin’s Creed Origins, think again. The colourful visuals, infectious music, and somewhat wobbly traversal make for an experience that’s unique to Sea of Thieves, though it does suffer from non-existent tutorials and signposting. It was impossible to understand what the objective of the game was at first, leaving us to exploring a hub island that had a few stores to buy gear such as clothes and supplies, and a bar that let us get drunk on grog.

The Best Upcoming Video Games of 2018

After getting bored of that, we took to the vast ocean surrounding us. There’s a bit of a learning curve involved when sailing. Lowering or raising the anchor, judging the direction of the wind, and managing the amount of sail needed as well as steering the ship, all need to be taken into consideration. It took us a few shipwrecks, and one try that resulted in us becoming shark fodder, before getting it right. Then navigation and sailing became second nature and we found ourselves visiting exotically-named locales such as Marauder’s Arch, Shark Fin Camp, Black Sand Atoll, and Sea Dog’s Rest.

Some of these areas were deserted islands, and others were outposts complete with cannons to welcome would-be intruders (including ourselves) and a few were replete with what appeared to be bones of huge, mythical beasts and graves marked with skulls. All of them were infested by skeleton pirates, other human players, or in some cases both. While the former would easily be dispatched with a well-placed shot from our pistol or musket (that comes complete with a scope), the latter proved tougher. The gunplay, particularly with the pistol, suffered from a large amount of recoil that almost always ensured we had to take a moment or more before firing a shot, making close-range encounters a frantic dance for the right position as we’d pull the trigger. It gave combat a somewhat clunky albeit workable feel that made scoring a kill immensely satisfying. 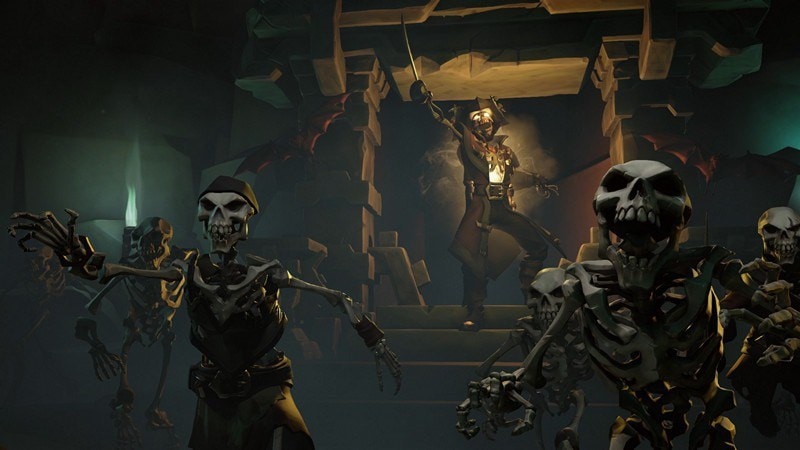 This aside, barring the odd server error that did not allow us to connect at all, the Sea of Thieves beta was smooth when we got in. On the Xbox One X, it looked fantastic with great water effects, generous draw distances, and character designs that really shine in ultra high-definition. However, it isn’t without its drawbacks. Granted this is just a slice of what to expect from Sea of Thieves when it hits in March, but the content at hand while vast, seemed to be the same thing over and over. It reminds us of No Man’s Sky at launch, which while having a number of planets to uncover, felt repetitive. It took the better part of a year before it was worth revisiting. Could Sea of Thieves suffer from the same concerns at launch? We hope not, simply because what we’ve experienced is entertaining, both when playing alone, or with friends.

Nonetheless, we’re cautiously optimistic about Sea of Thieves. The beta showed off stellar production values and polished core gameplay. Hopefully, the full game goes above and beyond that.

Sea of Thieves for Xbox One and Windows 10 is out March 20.

Can Sea of Thieves be the Xbox One's No Man's Sky?
Comment