Is Samsung Galaxy Note 9 the Best Phone to Play Fortnite Mobile? We Find Out 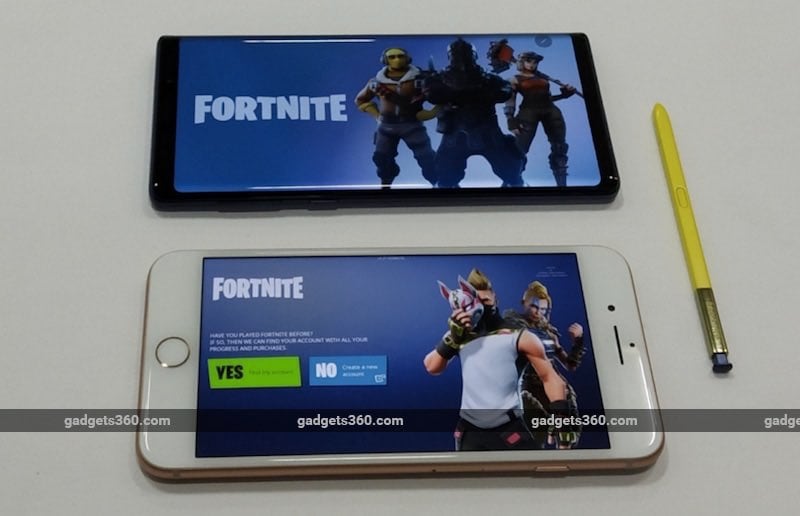 Firing up Fortnite Mobile for Android on the Samsung Galaxy Note 9 had the game default to the Epic preset, which is its highest graphics option The game has four of them - Low, Medium, High, and Epic. This was a good start, considering the Note 8 had us only go as far as Medium.

Also reassuring was the touchscreen controls on the Samsung Galaxy Note 9. Shooting and aiming felt a lot more responsive as compared to the Note 8, as did overall movement. Be it jumping, dodging fire, or gliding to the ground, it felt smooth and frictionless. Furthermore, there was no instance of lag or stutter on both 4G and Wi-Fi.

In our 20 minute Fortnite sessions, the Galaxy Note 9 did warm up just a bit, but never got as hot as the Galaxy Note 8 or the iPhone 8 Plus. While Apple’s phone was just as responsive as the Galaxy Note 9, the fact that Samsung’s newest flagship runs cooler makes Fortnite Mobile on the Samsung Galaxy Note 9 an experience best described as comfortable. More so when you consider that we didn't have to resort to activating Samsung's bespoke game optimisation tool known as Samsung Game Launcher to force a stable frame rate by overriding the game's presets or drop the Samsung Galaxy Note 9's resolution down from the native 2960x1440, tricks we had to resort to with the Galaxy Note 8. Hunting for chests in Twisted Towers, taking a swim in Loot Lake or exploring the lush locales of Wailing Woods was a smooth experience as was lining up shots for a kill.

Despite Fortnite Android on the Samsung Galaxy Note 9 being a pleasant affair, it's not perfect. Although it defaulted to the Epic preset, it didn't look as vibrant or sharp as Fortnite does on the iPhone 8 Plus. Trees and rocks would pop up as you walk across the terrain while buildings, houses, and benches had a blurrier look to them compared to Fortnite on the iPhone 8 Plus. Modifying the games options, using Samsung's Game Launcher or simply tweaking the Note 9 display's brightness or resolution did little to make it look better. Considering that the game is still in beta, we won't be surprised to see the visuals get up to speed soon enough.

So is Fortnite Mobile for Android on the Samsung Galaxy Note 9 the definite mobile experience? At this juncture, quite possibly so. The frame-rate holds up versus the iOS version on the iPhone 8 Plus. While it doesn't have the same visual punch as it does on Apple's hardware, it's a small trade-off when you consider that it doesn't get as warm and plays just as well, crucial when you consider the competitive nature of the game - it's solid over longer sessions of play.

With Epic Games acknowledging that the game doesn't run as well as it could on 4GB Android phones it could use the Note 9's performance as a benchmark for all of its Android efforts, which hopefully means better performance for Android users across the board in time, just not those who ponied up Rs. 67,900 or more for the Note 9. At the moment however, if you're looking for the best way to play Fortnite Mobile, look no further.