PlayerUnknown’s Battlegrounds (PUBG) for the Xbox One is out now and it just might be the best way to play the game. With over 24 million copies sold on PC, PUBG is arguably the hottest game of the year, and this shooter can be played in third- or first-person. It pits you against 99 other players in a battle to the death after parachuting onto an island where you have to scavenge equipment and vehicles to survive. But there’s more to contend with than just human opponents. The gigantic map you’re on is ever shrinking, forcing you to always be on the move.

In our PUBG PC review we stated that while the concept is fascinating, it’s let down by poor frame rate, random crashes, and other technical issues that make it one to avoid until these concerns are rectified. On the Xbox One S and Xbox One X, it’s a different story altogether.

Despite making the a bad first impression with the pre-match lobby and parachute landing sequence marred with frame drops and choppy audio, the rest of the game is surprisingly solid. The frame rate in PUBG on the Xbox One S and Xbox One X remains consistent throughout. It’s far from the fluid 60fps PC gamers have grown to expect from their games (try closer to 30), but it doesn’t suffer from the erratic dips that PUBG’s PC version is known for. This uniform frame rate is the difference between landing the perfect headshot or being gunned down. It doesn’t drop a beat in the most demanding situations, such as a six person shoot out in a desolate building with grenades exploding in every direction, which is commendable to say the least.

Even the controls (in all their complexity) are better on the Xbox One. From reloading a weapon to driving a bike, they’re fine-tuned and easy to learn. And while you can play PUBG on PC with an Xbox One gamepad, but it doesn’t feel as responsive as it does on the Xbox One.

In a game where the rules essentially boil down to kill or be killed, it’s nice to know that there’s parity across the board where it matters. That's right, even if you have the Xbox One X, you won’t have any advantage in frame rate (unlike Battlefield 1 on the PS4 Pro versus standard PS4). Well, at least not at this time, though that might change in the future if PUBG creator Brendan Greene gets his way. 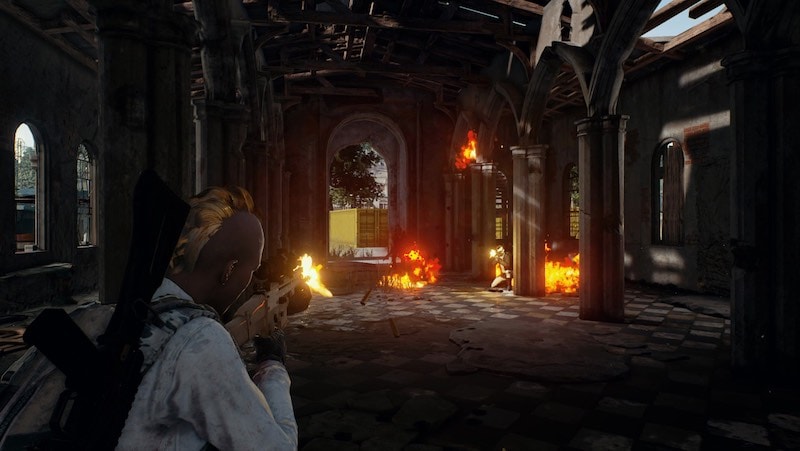 Where the Xbox One X does win out though is in visual quality. Landing on the ground, you’re treated to vast draw distances, gorgeous textures, and lush vegetation. It’s close to what we experienced of the PC version of the game at high settings. The Xbox One S suffers from a bit of pop-in where foliage crops up out of nowhere and on the whole, resembles PUBG at medium settings on PC. Ironically, lower graphics might be an advantage, as less foliage and other visuals means less to distract you from your targets. Considering that the game is in early access, developer PUBG Corp could add a toggle to prioritise visibility over higher details for Xbox One X users to allow for a more balanced experience.

However, what you do get is the most polished version of PUBG thus far. It outshines PUBG on the PC where it counts, with a consistent frame rate and slick controls. All of this results in a game that, while still in development, feels like early access done right.