Play PC games on your Mac or Android device, over the Internet 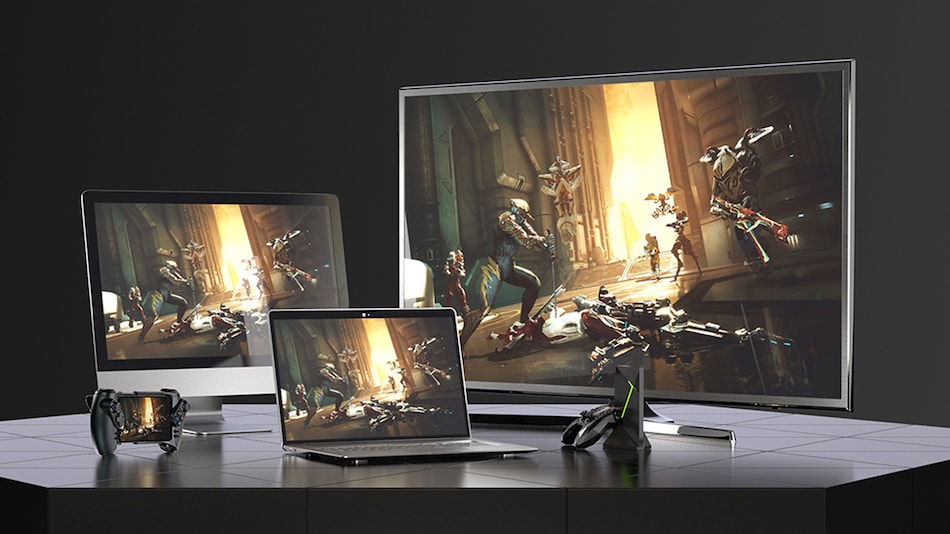 GeForce Now lets you stream and play PC games over the Internet, even on a Mac

With the lockdown being extended in India once again, a lot of you are probably running out of things to occupy yourselves with. Back in March, we had posted a few articles on how to keep yourself occupied while being quarantined at home. We had published a list of some of the popular multiplayer games you could try out with friends and family, as well as some hand-picked free apps and games to keep you sane during this period. With restricted movement being imposed in many parts of the world, online gaming has witnessed a big boom, and sales of video games have surged, at least in countries like the US.

If you're looking for more than just mobile multiplayer games, then how about PC gaming? Now before you say it, yes, we understand that not everyone has a gaming PC at home, but what if we told you that you don't really need one?

Enter Nvidia's GeForce Now game streaming service. We first tried Geforce Now at CES 2018 when it was in beta, and now that it's been officially released this year, we decided to try it out again. There is a small catch — GeForce Now isn't officially available in India at the moment, but there is a simple way in which you can get it to work here.

Nvidia GeForce Now: What is it?

GeForce Now is a game streaming service by graphics processor manufacturer, Nvidia. It works on a similar concept to Google's Stadia and Microsoft's upcoming Project xCloud game streaming services, where games are rendered on powerful servers and then streamed to the player over the Internet.

This means you can play even the most demanding game titles on a non-gaming PC or even a Mac or an Android smartphone. Think of it as Netflix, but instead of streaming movies, you're streaming a game. Nvidia recommends at least a 15Mbps Internet connection for gaming at 720p at 60fps, and a minimum of 25Mbps for gaming at 1080p at 60fps. It also recommends a wired connection or 5GHz Wi-Fi to minimise latency.

GeForce Now lets you stream some of the top-selling PC games, on any PC or Mac

While you don't need a high-end gaming PC to use GeForce Now, there's still a list of minimum requirements that your device has to meet, be it a Mac, PC or Android phone. Also, in order to play any game through GeForce Now, you'll have to own it first. These could be games you've bought through Steam, UPlay, Epic or other game stores. There are also some free-to-play titles in the catalogue, such as Destiny 2 and Fortnite.

You also need to keep in mind that using GeForce Now will consume a fair bit of your Internet bandwidth quota. While the exact amount varies based on the graphics settings and resolution you're playing at, Nvidia estimates that gaming at 1080p 60fps can consume approximately 10GB of data per hour. This is a lot more than Netflix's estimate of 7GB an hour for streaming a video at 4K.

Nvidia GeForce Now: How to access it in India

If you try to sign up for GeForce Now from India, you'll simply get a “not supported in your region” message. A simple workaround for this is to use a VPN service. If you already use the Opera browser, then you could use the built-in VPN, or you can download a separate application. For today's tutorial, we'll be using a MacBook Air (2017) and Windscribe VPN for Mac, which is one of the good free VPN services out there. A few years ago, you could sign up for GeForce Now in India if you owned an Nvidia Shield TV media streaming box, without the need for a VPN. It even displayed pricing in Indian rupees. However, we checked this again and it seems that this option no longer exists.

GeForce Now is currently only available in the US and Europe, so make sure you choose one of those countries as your temporary location in the VPN app. With the VPN on, click ‘Join Now' on the GeForce Now homepage and you should be able to sign up. Nvidia offers a free tier and paid ‘Founders' tier. For this exercise, we went with the free tier, which grants you standard access to Nvidia's servers and one hour of gameplay per session.

You can sign up for GeForce Now in India, with the help of a VPN service

The paid membership, which costs $4.99 (roughly Rs. 377) a month, gets you priority access to Nvidia's servers, which means you should be able to connect to a game a lot faster, and each session can last up to six hours. You'll also be able to use advanced features such as ray tracing in supported games. Nvidia is offering a 90-day trial period for the paid tier, so you could take advantage of that.

Whichever tier you pick, you'll then be asked to sign in with an Nvidia, Facebook or Google account to finish the formalities. After this, you'll need the GeForce Now client on your device, which you can download from here.

The GeForce Now app lets you search for a game, tweak your streaming settings, and manage your membership. You'll find many of Ubisoft's AAA titles here such as the Assassin's Creed and Far Cry franchises. Nvidia also claims that 30 of the top 40 most-played games on Steam are present. However, not every PC game is currently supported, as publishers add and remove games from time to time. Recently, Nvidia dropped all games from Activision Blizzard and Bethesda over reported disputes, although the exact details aren't very clear.

As we mentioned before, we tested GeForce Now on a MacBook Air (2017), which doesn't have very powerful hardware for gaming. You'll need to be logged in to the VPN before you launch a game, as the app does another check to see if you're playing from a supported region. It will also test your connection to Nvidia's servers. It might detect a weak connection, but you can ignore this since you're on the VPN and you'll be disconnecting it once the game actually starts.

You'll then be asked to sign in, first with your Steam or UPlay account, depending on the game you've chosen. In case you already own the game, it should start automatically. Else, you'll be taken to the respective store's landing page where you can purchase the game.

When launching a game through Steam, the interface is a little clunky. It shows you the entire Steam app and you even have to go through the process of 'installing' the game before you get to launch it. The game doesn't actually install on your laptop, and it goes quickly, but we wish it wasn't necessary to go through all this. If you choose a UPlay title, the game will launch directly once you sign in.

If you're on the free tier, you might have to wait your turn before a slot is available

We tried Hitman 2 and Far Cry 5, which ran fairly well, but the experience wasn't the same as playing the game locally. This could be because there aren't any servers in Asia, and possibly because we were using Wi-Fi. There was some minor lag when we panned the camera around, and in intense firefights, there were moments when the game would freeze for a split second or two, which isn't ideal. This was despite being connected to a 200Mbps Internet connection and playing in the same room as the router.

Still, we were playing high-end PC games on the relatively dated and low-end Mac, and the experience was quite fun. We were able to finish the first chapter of Hitman 2 quite easily, and Far Cry 5 was enjoyable, albeit slightly laggy at times.

A timer on the top, lets you know how much playtime is left in the current session

Since we were on the free tier, we got a little pop-up notification alerting us that we were 30 minutes into our game, and the same pop-up showed up again, counting down the time when we had just 10 minutes left. This gives you an opportunity to save your progress, if you can. After an hour is up, the app will boot you out of the game automatically. You can immediately attempt to sign back in and continue where you left off for another hour. On some occasions, we had to wait in a queue for a little while before we got a new slot to launch a game, but it wasn't a long wait.

With the GeForce Now app, you can even stream the same games on an Android phone. The minimum requirements are that it should have at least 2GB of RAM and be running Android 5 and above. Once again, the app isn't available on the Indian Google Play Store, so you'll have to download the APK from other sources and sideload it. There are plenty of sites from where you can download APKs. We got it from APKPure.

Once downloaded, manually install it on your phone. You might have to enable ‘installing from unknown sources' in your phone's security settings if you haven't already. Once you launch it, simply sign in and you should be greeted by a similar landing page as the desktop app, with all your games showing up on the top. Nvidia recommends using a gamepad from this list of supported ones. You'll also need a VPN app to complete the sign-in process and to launch a game. The Windscribe VPN app on Android works beautifully for this purpose. Remember to disable it once the game loads, for better speeds.

Since we didn't have a controller handy, gaming on the Realme X2 (Review) was notoriously difficult. The GeForce Now app will let you overlay an optional virtual gamepad on the screen, but it's not easy to use, especially when it comes to panning the camera. Still, seeing Far Cry 5 running on a smartphone was quite the treat.

Have you tried GeForce Now yet? Let us know what your experience has been like in the comments.

Aarogya Setu IVRS Facility Launched by Health Ministry for Those Without Smartphones
Redmi Chief Lu Weibing Teases 'New Surprises' in May, Could Be a 5G Phone, More