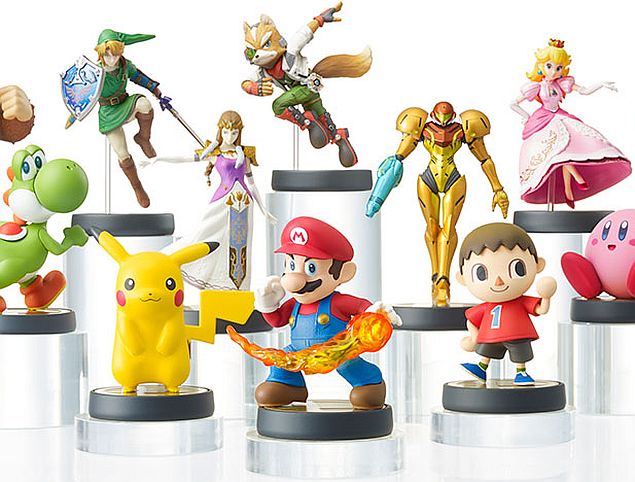 The first official day of E3, which kicked off with Nintendo's 'Digital Event' was a big success, to judge by social media. Even though Nintendo's latest console - the Wii U - launched before Sony's Playstation 4 and Microsoft's Xbox One, in the last one year, Nintendo has been seen as the laggard of the three. Given its long and storied history, it would have been unwise to count out the game company just yet, and this year's E3 seems to prove just that.

We got to see the new Super Smash Bros, which will come to both the Wii U and the Nintendo 3DS handheld console - which was used as a springboard to show us the Amiibos, Nintendo's take on Skylanders. Activision's Skylanders and Disney Infinity have proven that there is a big market for toys that can interact with your games, which can be a lot of fun for the people playing, and also a huge business opportunity.

The Amiibos (which will go on sale in the "2014 holiday season") come with NFC chips, which can be read by the Wii U gamepad, so you can scan a toy(of characters like Mario, Pikachu and Link) and get the character to fight for you in Super Smash Bros. What sets this apart from Skylanders or Infinity toys - which are compatible with a single game - is that theAmiibos are supposed to have wide support, and a peripheral released next year will let them work with the 3DS handheld console as well.

There were some great games shown, such as Captain Toad: Treasure Tracker, and Yoshi's Wooly World, building on characters that were first established in the Mario franchise. Both Yoshi and Toad are well known in their own right today, and Wooly World in particular looks amazing.

For many though, the highlight of the presentation was the Legend of Zelda demo. This is - no surprise - the best looking Zelda game to date. But what's exciting is also how Nintendo talks about breaking the conventions of the franchise, and opening up options for players. Speaking of Zelda, the announcement of Hyrule Warriors was interesting -bringing the series the gameplay of a hack and slash game, and expanding the Zelda games beyond just Link.

Bayonetta 2 had already been announced as a Wii U exclusive, but it was great to look at, and a far cry from the bright and cheerful demos of first partyNintendo games we had been shown so far. Bayonetta 2 looks amazing, andif it plays even remotely like the first game did, then it's going to be great. Oh and here's something that will put a smile on your face - if you buy the game at retail, you get the first Bayonetta bundled in. It's also one of the few games shown which people can actually play this year - it is releasing in October.

All in all, Nintendo had a great presentation, and deserves a lot of the praise that it is getting. But there's a catch. With a few notable exceptions, most of Nintendo's showcase is looking at 2015. That's true for a lot of the things that Sony and Microsoft showed us as well, but the PS4 and the Xbox One got off to a flying start compared to the Wii U.

The numbers don't look good
In an interview with Polygon, Ubisoft CEO Yves Guillemot said that the publisher has a couple of Wii U titles which are waiting to launch, that are not being released because the number of Nintendo consoles in the market does not make it worthwhile. That's a very damning statement, particularly as Ubisoft wasone of the early supporters of the platform.

Ubisoft isn't alone in this either - EA is also not making games for the console, and its Wii U page lists a total of four games.

While Amiibos are extremely cool, they don't sound like a reason to buy a console by themselves. The Nintendo fans who bought the console already are going to be very happy, but at least until 2015, the Wii U software library is going to look extremely sparse. Bayonetta 2 will be a big draw for some. Smash Bros might not be a system seller, because a lot of the people who would buy a system for that game probably already own the Wii U for Mario Kart 8.

Many of the most exciting games announced for the Xbox One and the PS4 will also be releasing in 2015, but there's a fair amount of content to bridge the gap, and when you look at the 2015 multiplatform line-up that has been announced for those systems, aside from exclusives, the Wii U looks a little lonely incomparison.

Without enough third party support, it's hard to imagine Nintendo building momentum after E3, in which case, having the most satisfying presentation might be moot.