After multiple leaks in the lead up to an official reveal at E3 2017, we're finally just about a month away from the release of Mario + Rabbids Kingdom Battle for the Nintendo Switch.

As the name suggests, this game combines Nintendo’s Mario universe and Ubisoft’s Rabbids, incorporating gameplay not too dissimilar to turn-based strategy titles such as Final Fantasy Tactics and Disgaea.

One of the most interesting things about it has nothing to do with the game itself. This is the first time since Super Mario RPG on the SNES that Nintendo is giving another company the reins to its most popular franchise - and that too a non-Japanese developer, Ubisoft. Gadgets 360 caught up with Davide Soliani, Creative Director at Ubisoft Milan to know more about the upcoming game.

Mario + Rabbids Kingdom Battle origins - inspired by Dota 2
“We said, how cool would it be if these two universes, that look so different to each other, are really colliding and uniting together," says Soliani. "We really wanted to play around with the contrast between those two universes; new visuals, new game mechanics, new music and a new kind of humour."

"We said, if Mario who is well known as a hero, and Rabbids who are well known for being crazy, are embarking on an adventure, what will happen?" he adds. "We said, maybe Rabbids will learn throughout the game how to become heroes, and Mario will learn how to crack a joke.”

From this starting point, turn-based strategy wasn’t the first pick for its genre. The game started its life as a multiplayer online battle arena (MOBA), such as Dota 2, and the studio even considered making a real-time strategy game.

“It was Mario + Rabbids first. Because, when we closed ourselves in a room with five designers an spent two weeks and a half brainstorming, we came up with 13 ideas," he says. "The first thing we wanted was to play around with this contrast, and to propose something completely new. As we were big tactical players, we started to scratch off all the other ideas until we kept this one."

"Our first reference was, okay if we are going to do a tactical game we should bring something new to the genre, to refresh it a little bit," explains Soliani. "So, I wanted something dynamic in the combat, something like Mario Kart. So, we thought about ‘Mario Kart without the Kart’, or ‘Mario Kart on foot’. The second reference we had was Worms.”

Mario + Rabbids Kingdom Battle gameplay, accessibility, and balance
One of the problems with strategy games is that they're typically not as accessible as shooters or platforms. Mario and Rabbids on the other hand are both very noob-friendly franchises. Would Mario + Rabbids Kingdom Battle be a game that anyone could pick up and play, without sacrificing depth or variety?

“We wanted this game to be truly accessible, and I always say that for me this game is like an onion," says Soliani. "So, you start with the first layer, but as soon as you peel off the different layers you discover new things, new levels of depth. But the first impact the player should have is the accessibility part, that’s why our way to refresh the genre was to add the dynamism.”

“So, if you play you will notice that, for example Rabbids Yoshi, can run, do a triple dash and then team jump, go behind cover and still the player has a different action to perform," he continues. "Maybe the camera is following the sequence with different angles, in an action-oriented way. All of that, even if it looks complex, is done within the simple impression of a battle, because we are a turn-based game." 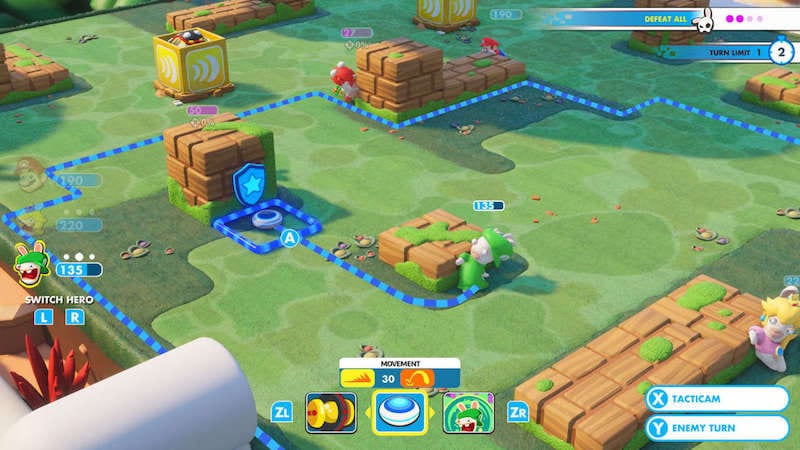 By moving away from the original real-time strategy or MOBA plans that the team had, the game becomes more accessible, but at the same time, there are enough options available to keep players engaged over time.

"We are removing the situation of a real-time game where the player needs to be synchronised with the movement of the character and the camera, because they can spend their time observing the situation, and planning their moves, then press the button to see their execution. And we wanted to do it in a way that was really visually rewarding,” says Soliani.

This wasn't the only way in which the game was tweaked to make it more accessible and also fun. Soliani goes on to outline how the design incorporates depth is a number of different ways.

“That is why we came up with tools, such as the weapons are not there just to do damage to the enemies but you can apply different super effects," he explains. "So, you can see an enemy running on the battlefield with their bottom on fire, and if it’s running into and touching other enemies, it starts to propagate the fire; the weapons have different statistics too, and later in the game we unlock the Skill Tree which opens up new possibilities to the player."

"The combination of all those factors – the synergy between movement and attack technique, the weapons and the Skill Tree – is really giving the depth that we wanted players to have fun with,” adds Soliani.

With all this in mind, ensuring that no single attribute, item, weapon, or character is overpowered is no easy task. Soliani says the team runs “many, many playtests”, so that the game is a fair experience for all who play it. “We were balancing the game throughout a huge Excel file with all the parameters, comparing them," he says. "It takes a lot of time and a lot of effort because we have eight characters on the roster, multiple enemies, multiple super effects, multiple weapons with different statistics, and multiple skill trees to compare.”

How Ubisoft Milan convinced Nintendo to show Mario with a gun
While Ubisoft Milan handles the game’s development, Nintendo has played a supervisory role through and through. Mario + Rabbids Kingdom Battle marks the first time the Kyoto-based company’s popular mascot is seen with a gun. Before seeing the light of day, was there any resistance to Ubisoft’s idea of portraying Nintendo's famous mascot with a pistol?

“[Regarding the gun] we were the first and biggest filter before reaching Nintendo. The whole presentation of the weapons happened in Kyoto, but before going there we knew that it was the first time Mario was holding a weapon, we knew that it was possibly working only if it was merging well with the tone of voice, the light-hearted kind of aspect," says Soliani. "We used a lot of disproportion to create our weapons, we didn’t want them to look real, but at the same time we wanted the player to understand the function by just seeing the visual. When we arrived [at Nintendo] we had a vision of the weapons that was almost final, and they accepted our intention.”

“At some point, we talked about using the touchscreen, but we said it was not really the experience that players will have with our games," he explains. "If we implemented the touchscreen, the whole selection of the game would have been different, and we were not willing to implement it only for the sake of doing it. So, we said no.”

While the game might be avoiding the touchscreen, Nintendo has shown itself to be more open to DLC and in-game events, as shown with games like ARMS, and Splatoon 2. Ubisoft also has a focus on post-game support and online services, as we’ve seen with Watch Dogs 2 and The Division. Soliani left us with a hint of what to expect.

“I cannot answer right now, but what I can tell you is that we are working hard to prepare a few surprises.”