How 'The Force' Is Invading 'Disney Infinity' Game Series 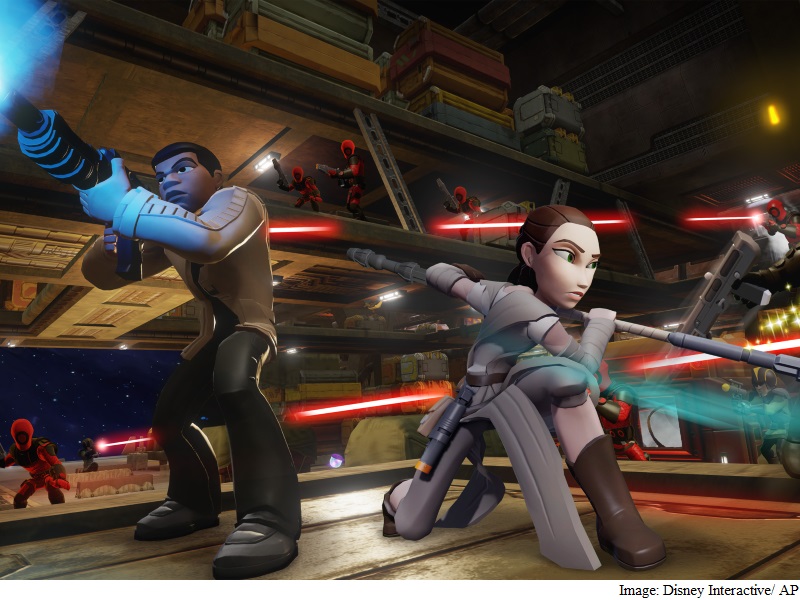 There's a great - and unique- disturbance coming to 'Disney Infinity.'

Disney is adding content to its popular toys-to-life video game series from "Star Wars: The Force Awakens" alongside the film's much-anticipated release on Friday. Earlier this year, characters from the original and prequel film trilogies, as well as the animated series, were introduced in 'Disney Infinity 3.0.'

The new fleet is landing after a wide array of characters, such as Captain Jack Sparrow from 'Pirates of the Caribbean' and Elsa from 'Frozen,' have appeared as playable figurines that can play together on screen. 'Infinity' marks the only way fans will be able to interactively experience the movie's super-secret storyline.

"We've always talked about 'Infinity' being a platform for the whole family, and we've seen sales data reflect that, but with 'The Force Awakens,' I don't think there's anything else that could drum up the same level of enthusiasm across the board," said John Vignocchi, vice president of production at Disney Interactive Studios.

During a demonstration of 'The Force Awakens' playset, Vignocchi explained how the developers of mash-up franchise were inspired by the new vision of "Star Wars" as defined by "The Force Awakens" filmmaker J.J. Abrams and Lucasfilm president Kathleen Kennedy.

Good feeling about this
From a chase sequence involving the Millennium Falcon across the battle-scarred landscape of Jakku to a firefight with Stormtroopers on the surface of Takodana, the plethora of action scenes depicted in "The Force Awakens" meant the film was more primed for interactivity than almost any other previously featured in "Infinity."

"With many of our adaptions of big, tent-pole releases in 'Infinity,' they've been original stories or levels that expanded on the fiction of particular moments from a movie," said Vignocchi. "In the case of 'The Force Awakens,' we felt after reading the script that there were so many scenes that would directly translate into great gameplay."

The newest "Infinity" addition will provide fans with a in-depth look at the sandy home planet of new protagonist Rey (Daisy Ridley), the headquarters of pint-sized pirate Maz Kanata (Lupita Nyong'o), the base for baddie Kylo Ren (Adam Driver) and the spacey locale where Han Solo (Harrison Ford) has been hanging out.

Ways of the force
The virtual recreation of Rey, Kylo Ren, Finn (John Boyega) and Poe Dameron (Oscar Isaac) presented a unique challenge for the developers. Unlike such characters as Spider-Man, the abilities of "The Force Awakens" newbies haven't been fleshed out by decades' worth of comic books and movies.

For instance, defector Finn begins with a blaster as his primary weapon. However, if players level up the former Stormtrooper in "Infinity," he'll add a lightsaber attack as a finishing blow. Finn's change of occupation can also be illustrated with his attire. The character can wear both his Stormtrooper armor and a Resistance jacket.

Lot in life
Where's the love for the BB-8? The spherical droid, who arguably rolls away with the most screen time of any 'Force Awakens' newcomer, won't initially be a stand-alone figure and playable character. Instead, BB-8 appears as a guide and can be called upon by Poe to distract Stormtroopers.

"There are some things that BB-8 can't inherently do that bipedal characters like Finn, Rey and Poe can do in the game, like hanging from and shimmying across ledges," said Vignocchi. "We could've cashed in and made a BB-8 figure, but is that the right thing to do when it comes to gameplay? It's something that our teams are working on."

While the original edition of "Infinity" included wheeled characters from Pixar's 'Cars,' Vignocchi noted that the spinning sidekick isn't simply another ride. He said BB-8, as well as fellow droids R2-D2 and C-3PO, are an entirely new class of character that isn't quite ready to be deployed in 'Infinity.'