Hearthstone's Puzzle Lab Is a Great Reason to Play Hearthstone Again, Just Not in Multiplayer

Hearthstone is now four years old and yet it continues to get significant gameplay updates via expansions. The collectible card game has received three expansions each in 2016 and 2017, and now it looks set for three this year. The Boomsday Project is the second expansion of 2018, which is Year of the Raven in Hearthstone terminology, and it follows The Witchwood, which was released in April.

The challenge with collectible card games such as Hearthstone is maintaining a delicate balancing act between keeping things fresh via new cards and expansions, while still keeping the game accessible for new players (or those returning to the game after a long time, for that matter). We last played Hearthstone at the start of 2015, when it was still early days in the game’s history. Until The Boomsday Project came along, that is.

Since it’s been so long since we played Hearthstone, it took us a week to just figure out which cards are the strongest right now and the decks we want to make. Thankfully, the core gameplay loop remains the same - two heroes playing against each other and using various cards to try and win the battle.There’s no limit on the number of cards you can play but each card costs some mana points and you can only have a maximum of 10 mana points per turn.

Some cards serve as minions — they can attack enemy minions or heroes, and sometimes they may have associated traits such as taunt (enemies have to attack that minion, drawing attention away from important cards), or stealth. There are also spell cards that let you do things such as send all of the enemy’s minions back to their hand. You get cards via card packs, which can be earned or purchased, and then you can create a deck of 30 cards. To win in multiplayer, you will have to create a custom deck and plan your strategy. 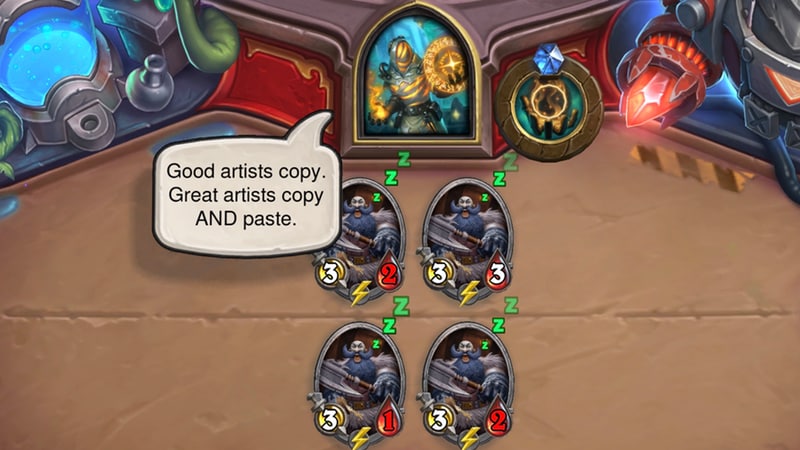 Blizzard, the developer, also retires a bunch of cards every year so some of our favourites such as Ragnaros the Firelord and Sylvanas Windrunner are no longer in most modes of the game. We were never good enough at Hearthstone to play it professionally, but our style of play four years ago made Hearthstone an extremely enjoyable game of chance.

The Ragnaros card couldn’t attack anyone but it would randomly deal 8 damage to any minion or hero (including yourself) on the board, leading to some nail-biting finishes. Similarly, if Sylvanas died, it’d allow you to take control of a random enemy minion, which made sure that every game was unpredictable and Hearthstone stayed fresh. We were sad to see these cards missing, and as a result, we spent a lot of time going through the new cards that arrived with The Boomsday Project.

Multiplayer in Hearthstone has become a bit too difficult for us. There are two reasons behind this — one is that it’s really hard to create a competitive deck if you haven’t been buying the card packs that expansions have added and the second is that most of our opponents seemed to have copied the decks used by masters of the game. Hearthstone allows you to easily copy decks but that’s not very effective if you’re missing lots of cards.

We tried playing multiplayer for quite some time but weren’t able to get into it simply because of the time investment required to craft the cards needed and create good decks. That said, the reason for these changes is to ensure Hearthstone's metagame stays fresh, forcing the most dedicated of its player base to try different strategies, at the same time it creates a steep learning curve for casual players.

That brings us to the mode we spent countless hours playing — The Puzzle Lab single-player expansion. The Puzzle Lab is essentially a bunch of of scenarios where you have to meet objectives such as survive an enemy attack that deals 29 damage (your hero’s maximum health is 30), clear all cards (including your own) from the board, and mirror the cards on the enemy’s side of the board. These puzzles appear to be simple at the beginning, but the difficulty rises exponentially.

There are over 100 puzzles in The Puzzle Lab and some of them are so challenging that you need to play a set of cards in a particular order, followed by playing a card that puts those cards back in your hand, before repeating this twice more to be able to play all the cards you need without running out of mana. See how complicated the solution is sometimes? That’s The Puzzle Lab for you. We haven’t even mentioned the boss levels in this yet. After you complete four sets of puzzles of each type (survival, board clear, mirror, etc.) you unlock a set of puzzles featuring Dr. Boom (the antagonist), which are even more difficult at times. The amount of content put out under this free, single-player expansion is mind-boggling. It’s sure to keep people occupied for weeks or months. 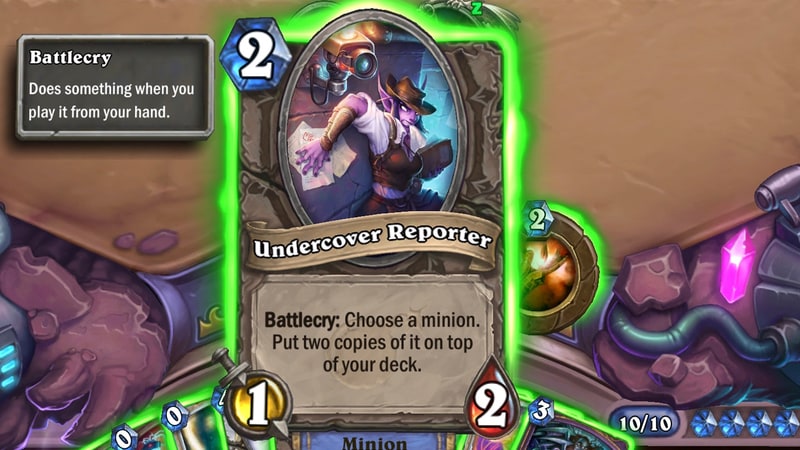 We enjoyed solving the puzzles a lot, and we’d definitely recommend this to anyone who hasn’t played Hearthstone in a long time. It’s a shame that many of the cards in The Puzzle Lab don’t exist in the main game. All that time we spent figuring out what new cards do in The Puzzle Lab isn’t of much use in multiplayer and that feels a bit disappointing. After clearing the entire set of puzzles in this expansion, we were rewarded with a custom card back. Yes, that’s right, it’s a custom design for the back of the cards you have. This kind of a cosmetic reward is completely not justified for the effort it takes to complete the challenges (unless you ‘cheat’ by following guides online). We feel that the reward should’ve been a card pack or one legendary card, but that’s unlikely to happen for a set of free puzzles.

Hearthstone is an online game, which means that even the single-player component stops working if your Internet connection dies. Four years ago Blizzard had optimised the net code very well and it worked well even on 2G Internet connections. We were curious to see if this was still the case so played Hearthstone on slow Wi-Fi networks this time around and experienced several disconnections, which soured the experience a little. However, if your existing Wi-Fi or data plan lets you play current mobile games like PUBG Mobile and Arena of Valor smoothly, you'll be fine for Hearthstone.

Is The Puzzle Lab likely to get us back into playing multiplayer Hearthstone? No. Four years is too big a gap to be returning to a game like Hearthstone, and we just don’t have the motivation to sit and build powerful decks to take on other players online. However, Hearthstone is free to download and The Puzzle Lab is a free expansion for everyone, which means you should definitely check it out once even if you’ve never played Hearthstone. The quality of puzzles is really good, and if you think of it as a free online puzzle game with no ads then there’s no reason not to try it.

Further reading: Hearthstone
Pranay Parab Email Pranay
Pranay is in charge of podcasts and videos at Gadgets 360. Over the years, he has written over 500 tutorials on iPhone, Android, Windows, and Mac. He has also written in-depth reported features on the intersection of technology and culture, reviewed fitness wearables, been the social media manager, started two podcasts, and produced several tech videos. He loves travelling, particularly to places not frequented by tourists. He keeps running half-marathons across the country and hopes to complete ...More
Spider-Man PS4 Release Date, Price, Editions, Download Size, and More
Netflix Developing Diablo Series With Hellboy Co-Writer Andrew Cosby: Report