Fending Off Fortnite: Can Overwatch Stay Atop the E-Sports World? 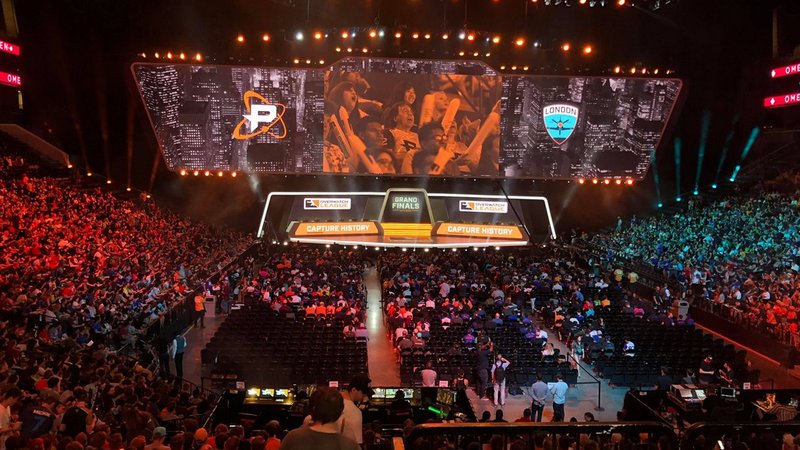 The Overwatch League has planted its flag atop the e-sports mountain. But just like its twitchy-thumbed superstars, the premier circuit can't afford to sit still. Not as long as Fortnite commands the rest of the gaming universe.

The Fortnite phenomenon has put Overwatch in a strange position. The Overwatch League's inaugural season has been a barrier-breaking achievement, but Blizzard Entertainment's 6-on-6 first-person shooter isn't nearly the world's most popular video game. That would be Fortnite, a battle royale that has transcended gaming and smashed into the mainstream unlike any title in years. Overwatch executives say they aren't nearly panicked because of one grand gamble: their deep pockets and impressive infrastructure can keep Fortnite from making a successful charge for the crown.

The league
A top-selling game doesn't necessarily make an elite e-sport - the latter requires a professional circuit, loyal fans and a product that's just as enjoyable to watch as to play.

The Overwatch League has set the standard for e-sports in its first season. Ten million fans watched its opening weekend, and 100-150 thousand tuned in for every second of the regular season. The league's two-night championship sold out Brooklyn's Barclays Center, and the opening night aired live on ESPN, the network's first live broadcast of e-sports in prime time. The league has a fierce and sizable stable of fans, big-name investors like New England Patriots owner Robert Kraft and the momentum of a monumental first season.

Formidable Fortnite
Yet video gamers are clearly more ravenous for Fortnite. The breakout title from Epic Games has 125 million global players, compared to 40 million for Overwatch. Perhaps more jarring, Google searches for "Fortnite" outpaced "Overwatch" 14-to-1 in the week leading up to the Overwatch League Grand Finals.

Fortnite's crossover appeal is unrivalled, a fact most recently on display when France's Antoine Griezmann celebrated a goal in the World Cup Final with a dance move popularised by the game .

How could Overwatch not be terrified of a competitor with that kind of organic reach?

Simple: it doesn't see Fortnite as competition - yet.

"Fortnite right now is 99 percent a game and not an e-sport," said Ari Segal, president of Immortals Gaming, which runs Overwatch's Los Angeles Valiant. "But I think obviously there's a path for it to become an e-sport."

The distinction is key. Structured, competitive Fortnite events are still in their infancy, and Epic has a ways to go to match the professional experience provided to Overwatch League fans. Epic began that effort by promising in May to offer $100 million (roughly Rs. 685 crores) in Fortnite e-sports prize pools - an enormous sum for the industry.

Yet early returns have been shaky, like when the Fortnite Summer Skirmish Series was cancelled mid-play due to technical issues. The tournament has also been hindered by conservative game play, with players waiting until the last possible moment to engage. In a statement, Epic said that it "under delivered" in what was supposed to be its first marquee e-sports event while laying out plans to improve the viewing experience.

Epic did not respond to a request for comment from The Associated Press.

"It takes a lot more than a press release to build an e-sport," Overwatch League Commissioner Nate Nanzer said. "I think I can speak as well as most that there's a ton of investment and planning and infrastructure that you need to build in order to do professional esports at a high quality bar."

The grand finals
Overwatch's Grand Finals have been a showcase for that. All it takes is one look at the 165-foot-wide, 36-foot-tall LED screen behind the Barclays Center stage - players and fans alike were in awe of the massive display.

But it runs deeper than flashy tech. The league's broadcasts on Twitch have been nearly flawless technologically all season. Its teams have impressive support staffs including chefs, physical trainers and PR managers. Even the in-event entertainment is first-rate: DJ Khaled performed at Saturday's championship finale.

Which isn't to say Overnight is a finished product. There's work to be done packaging its events, especially for casual fans. Blizzard plans to experiment with its broadcast structure to better serve diehards and newbies alike. Those adjustments began with more explanatory segments on the ESPN show for uninitiated viewers, and the league will use feedback from that to shape coverage for next season.

"What I saw on Twitter was fun," said Pete Vlastelica, President and CEO of Activision Blizzard Esports Leagues. "I liked seeing the healthy debate between the old-school, old-guard sports audience who wondered what they were watching and then a lot of young sports fans who were very excited by what they were seeing."

Even as it experiments, everything about the league has the look and feel of a top-notch pro sports organisation, and that's been a matter of investment and expertise for Blizzard and its team owners - a group that includes Kraft, New York Mets COO Jeff Wilpon and Los Angeles Rams owner Stan Kroenke.

E-sports organisations, like Segal's Immortals, are keeping a close eye on Fortnite.

"Do you have the access to capital and the human resource capacity and the organisational bandwidth to be nimble and flexible to evaluate whatever that next thing is?" Segal asked. "With respect to Fortnite, it's an ongoing evaluation."

At some point, it seems likely that Fortnite - or perhaps another battle royale, like PlayerUnknown's Battleground - will get there. When it does, Overwatch thinks it's poised to survive.

For starters, Overwatch the game was built to endure. Blizzard Entertainment specialises in titles with staying power. Its Warcraft franchise launched in 1994 and has remained a hit. Same with series like Diablo (1996) and StarCraft (1998).

That's the key to Overwatch's ongoing relevance, according to Jurre Pannekeet, head of e-sports at market research firm Newzoo. It's a difficult thing to perpetually innovate and improve a game, but Blizzard might do it better than anyone.

"They have really long-standing franchise with big fans that have played these games for several years," Pannekeet said.

It's also possible - some think likely - that the esports landscape can accommodate more than one superleague.

"Certainly, Fortnite is stealing share from everybody, to some degree," Segal said. "But it's not just zero-sum. The pie is growing."

The hope is that players hooked into gaming by the Fortnite experience might shop around for other titles once they're exposed to e-sports.

"I think we welcome more investment in the space," Nanzer said. "And I think e-sports as an industry is definitely still in the 'rising tides lift all boats' phase of our growth."