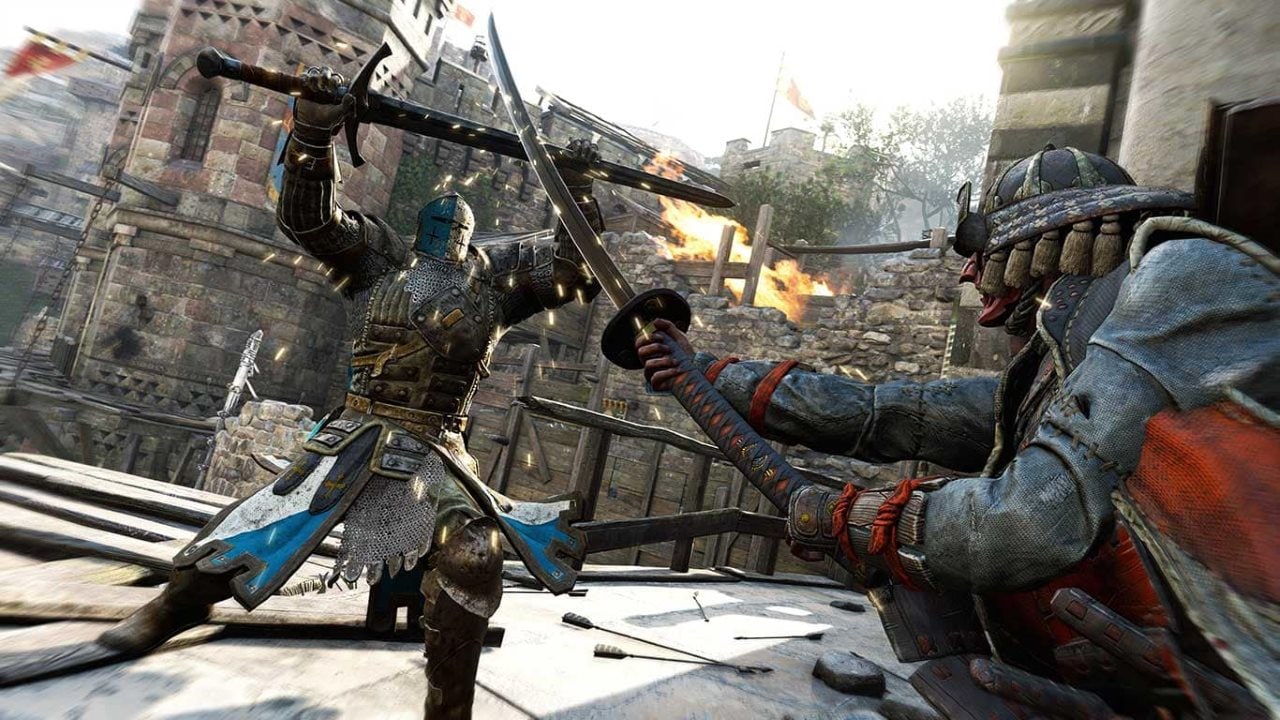 With For Honor, Ubisoft’s newest title which launched on Tuesday for PS4, Xbox One and PC, the company continues its trend of not giving away review copies of multiplayer-focused titles to the press before release. Matchmaking can be a troubling aspect for such games – players complained about this during the beta test over the weekend – and so Ubisoft figured it’d be best to let everyone onto For Honor at the same time, which ought to help in finding people to play with.

Spoiler: it’s still not great. In our time with the game’s PC version, multiplayer matches in For Honor routinely took more than two minutes to get started, and that was after the search had been expanded beyond our region and skill level. As you can expect, that’s bound to affect your experience with the game, be it for the higher lag you might face, or the disparity in skill between your opponents and you in the beginning. People (usually) play online for competition, and not to get slaughtered.

The bigger fallout of Ubisoft’s decision for media, like us, and in turn for readers everywhere, is the lack of reviews. Since members of the press began playing only on Tuesday, there are no For Honor reviews out currently, and won’t be for the next few days. Those who pre-ordered the game based on trailer footage – which you really shouldn’t – will face no problems. But the rest of us, who depend on reviews before making a purchase – For Honor’s asking price of Rs. 3,499 on PS4, and Xbox One; and Rs. 1,799 on PC isn’t chump change – will be left frustrated.

We are working on our review of the game right now, but after having spent a few hours with the game, we do have some initial impressions to share. And since Ubisoft is pitching it as a multiplayer title, let’s start with that.

For Honor multiplayer first impressions
The game's developers, Ubisoft Montreal, have come up with three types of multiplayer modes – Deathmatch, Dominion, and Duel and Brawl. The first one is straightforward – you go 4 vs 4 in either Skirmish or Elimination, where it’s about hitting a points target, or killing everyone present on the battlefield.

Dominion allows a total of 8 players, or heroes as they are called in For Honor. Your team will be supported by waves of soldiers, who serve as fodder, just as Creeps do in Dota 2. There are three different areas to control on each map type; they give you points to rack up a score. But the bigger focus is the enemy players, whom you need to repeatedly eliminate until all their respawns have been used up. The last one standing wins, obviously, but only once you’ve hit the target score of 1000.

That leaves the third and last option currently available. Both Duel and Brawl offer the same type of gameplay – you go head-to-head in a best of five, without any support or powers. Where Duel is 1 vs 1, Brawl dials it up to 2 vs 2. Depending on how you play, you level up and win items – pretty much standard in how games handle multiplayer these days.

Ubisoft really wants you to feel your actions matter, and so all these game modes are placed on a bigger map to represent the standing of For Honor's three factions – Knights, Vikings, and Samurai. As players pick a side and fight for victory, the area they cover – and the positioning of the game modes themselves – change accordingly to reflect that. The stats change every few hours, so when you resume playing the next day, the map’s colours, and what map you get for Dominion, or Duel, would have changed too.

Like other always-online games, For Honor’s multiplayer will go through a format of rounds and seasons, with Ubisoft promising to bring in more game types as time goes on. There’s already a greyed-out Events section, which we assume will be used to invite people back into the game from time to time.

The actual fighting on the ground takes a little time to learn. If you’re the kind of person who just wants to jump in for a quick melee now and then, For Honor may not be the game for you. At the start of the game, the developers take you through a combat tutorial that lasts roughly ten minutes. It’s meant to teach you the basics – how to block attacks coming from different directions, how to move and lock on to your target, and the two different forms of attack – light or heavy. There’s more depth to combat, such as how to dodge attacks, which gets sprinkled in later.

While it seems For Honor gives you ample time to go through the basics, understanding that not everyone may have the same level of competency to begin with, it’s only when you’re getting badgered in multiplayer do you realise the inadequacy of the tutorial. And owing to the undependable matchmaking – you don’t always meet players of your skill level – 4 vs 4 matches can suffer from levelling problems, too. For what it’s worth, there’s an entire section in the main menu titled ‘How To Play’, and you should definitely spend some quality time there.

Although the controls are easy to pick up, For Honor is anything but a button-mashing experience. The game’s physics engine feels pretty realistic in terms of movement and fighting, what with the amount of armour on their bodies, or having to wield long, heavy swords, or axes. That results in a relatively slow-moving game experience, more so if you’re coming from the jumpy physics world of modern FPS titles. Knowing when to dodge, counter, block, or strike is an exercise in patience as much in experience.

The patience bit has to do with an in-game system as well, in the form of a stamina meter. You can only deal so many blows before your warrior needs to take a breath, and its inclusion in For Honor is a reminder of how crucial pauses are in any fight. Go berserk, and you’re likely to be left panting while the other hero casually moves away from your wild air cuts. Once you’re out of stamina, it becomes an opportunity for your opponent to take the upper hand. Heroes can defend even when they’re low on stamina, but the presence of chip damage – your life meter takes a little beating on blocks – and the ability to break someone’s guard, are strategic choices that define whether you live or die in For Honor.

For Honor single-player first impressions
The first thing you get to do in For Honor, after watching the cinematic opening sequence, is select one of the three classes – Knights, Vikings, or Samurai. Your choice doesn’t change whom you can play with in the multiplayer section, but it does change the starting point of the three-chapter campaign, named after the classes. If you pick Knights or Vikings, you will start as one of the most balanced playable classes in the game – Warden for former, and Raider in the latter case. The Samurai chapter is the outlier here, which starts you off as a specialised warrior, in the form of assassin-type Orochi. While they are more lethal in attacks, their defence expectedly suffers.

The story is threadbare – the three factions have been at war for a millennium, either through their own differences, and goaded into it by another force – For Honor’s primary antagonist, Apollyon, the female leader of the Blackstone Legion. At her behest, the Legion – a warring Knights faction – stir up trouble all over Ashfeld, provoking the Knights, Vikings, and Samurai to fight back. While you’ll start with your faction of choice, you can unlock the other two chapters one after another.

Moreover, you can play all of it alongside a friend in two-player co-op. As with the rest of the game, even the single player mode is online-only. Thankfully, we never had any server troubles in For Honor – losing connection, having to quit the story mode, or anything of that sort – but how that holds up with a higher number of players is a topic for another day.

The single-player experience is definitely a good way to get into the game’s basics. Since Ubisoft knew that some players will likely jump straight into multiplayer, the opening tutorial gets a revisit of sorts in the first sub-chapter of the campaign. Successive sub-chapters build on the game’s lore, advance your character’s journey, and provide you with new styles of combat. From our experience with For Honor, we’d advise you to begin your game in single-player – learning and mastering the basics of your chosen hero type – before you advance to multi-player combat.

Apart from giving you the much-needed experience, it will also let you hone your dexterity with the game’s control mechanics on your own terms, rather than being thrown in the deep end, which the multiplayer modes can very much feel like.

Despite Ubisoft’s marketing strategy of For Honor being a medieval tale of cool warriors, it’s very much a fighting game at heart, that lets you play as a fantasy-inspired version of Knights, Vikings, or Samurai. It’s been developed with multiplayer first in mind, and the game’s main menu convey as much – the multiplayer option is not only placed above the campaign, but is also more prevalent, as there are options for creating a quick or custom game. It’s clear then that’s how Ubisoft sees the game, and wants it to be.

We’ll be diving back into For Honor, and if you’ve got any questions, talk to us via the comments.