After releasing on the PS4 and Xbox One, Final Fantasy XV is set for its PC debut on March 6 as Final Fantasy XV Windows Edition. The Japanese role-playing game (JRPG) has seen a wealth of updates and patches to enhance the experience. PC gamers will be able to benefit from these fixes along with each piece of Final Fantasy XV season pass content, such as Episode Gladiolus, Episode Prompto, Multiplayer Expansion: Comrades, and Episode Ignis.

However, Final Fantasy games on PC have had a mixed track record at best. Outside of Final Fantasy XI and XIV that were massively multiplayer online role-playing games (MMORPGs) built with the PC in mind, most single-player focussed Final Fantasy games have suffered from a myriad of technical concerns such as poor frame rate, subpar visuals, and bugs galore. Does Final Fantasy XV Windows Edition fall into the same trap?

Final Fantasy XV Windows Edition makes a great first impression. Diving into the game’s visual options, you have a wealth of settings to tweak and customise as you see fit. From the usual ones like adjusting anti-aliasing to remove jagged edges, to bespoke options that make full use of Nvidia GPUs such as HairWorks, TurfEffects, and ShadowLibs for hair, grass, and shadow effects, there’s a lot to play around with to get the best possible performance. 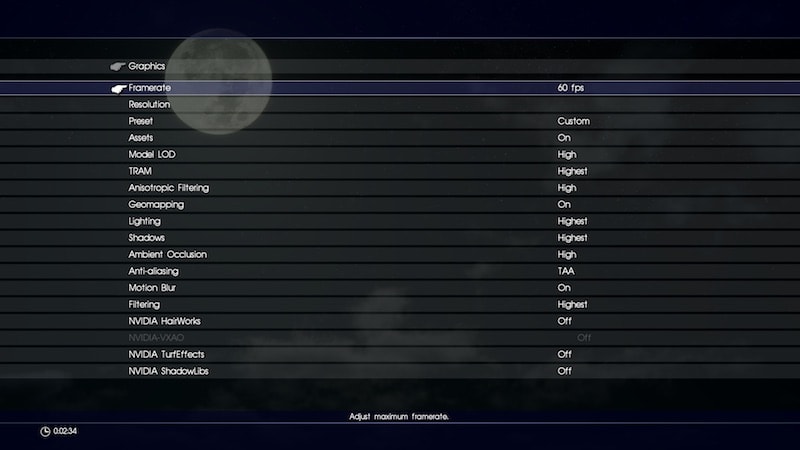 Final Fantasy XV to Get New Episodes Until 2019

In a way, it’s a statement of intent from Square Enix, to not repeat the issues that have plagued past Final Fantasy PC releases by essentially throwing in everything including the kitchen sink. Be it being able to adjust HDR via a slider or cap the frame rate at 30, 60, and even 120, the level of control is welcome. More so when you consider how anaemic previous games have been in this regard on PC.

The afterglow of Final Fantasy XV Windows Edition’s PC prowess extends to the image quality on display. Facial features like wrinkles and scars are exceptionally detailed as are the open environments of the game’s first area — Hammerhead, littered with grass and rocky formations that surround a garage and a diner. Unlike the console versions of the game that have a somewhat soft look to them, Final Fantasy XV Windows Edition is crystal clear making it a visual spectacle particularly when you’re roaming its open-world in search of monsters to slay.

That being said, any feeling of elation quickly gives way to concern thanks to Final Fantasy XV Windows Edition’s poor frame rate, which impacts almost every part of the proceedings. In our experience, cut scenes, combat, or simply just walking around tend to give way to a very obvious stutter and corresponding drop in frame rate. Ever so often the game would dip from 60fps to 28fps or so. Lowering the details down to High or even Average from the Highest option did little to alleviate this. Reducing the resolution from 1080p to 720p didn’t help matters and neither did turning off Nvidia-exclusive options like HairWorks. We noticed this on two Windows 10 PCs — an i5 3470 and an i7 7700 running an Nvidia GTX 1070 with 16GB RAM and a 500GB SSD. Of course this was with the latest drivers from Nvidia on both machines.

This inconsistency in frame rate across various permutations and combinations makes Final Fantasy XV Windows Edition in its current state far from enjoyable, laying waste to any possible immersion. Final Fantasy XV’s combat — an action-packed affair — is its best feature. On PC, the simple joy of controlling lead character Noctis directly or issues commands to your allies is plagued with problems. Frequent stutters ruin spell casting, special attacks, or simply wielding a sword. What should have been victorious moments, like taking down ginormous demons with a sliver of health left, were knee-capped by constant, almost regular lag that almost made it seem like a feature instead of a bug.

Despite looking so good, it’s perhaps hamstrung by its own ambitions — unlike most games that use Unreal or Unity, Final Fantasy XV uses its own proprietary tech known as Luminous Studio which had a long and somewhat troubled development period.

With the Final Fantasy XV Windows Edition release date being March 6, we hope it doesn’t suffer from the same issues its demo does. As it stands, it’s a welcome to see series creator Square Enix to spend this much time and attention on a PC version of the game and it shows with its stellar visuals and options galore.

Final Fantasy XV Windows Edition’s inconsistent frame rate stops a good game from being great, this is one you should hold off from pre-ordering until we see what the full release brings.