FIFA 17 Demo Gives Enthusiasts the Tools to Stand Out

It’s no secret that Cristiano Ronaldo is one of the best players the sport has ever seen. On a football pitch, the Portuguese footballer is capable of remarkable and astounding feats, and scoring goals at a rate that his fans can’t even match in video games over the course of a season.

Football simulators, the most visible of them being EA Sports’ FIFA, have tried their level best to emulate his style of play over the years - from the way CR7 stands over a free-kick, to decoding his ability to hang in the air for headers, EA’s developers have, over the years, given armchair dribblers like us the closest experience possible. But despite their best efforts, the game always lacked one component in Ronaldo’s arsenal: keeping powerful shots and headers low to the ground - until now.

With FIFA 17, driven shots are now a thing. They are one of the most significant changes to these year’s instalment, advertised in the first screen you see when you boot up the game’s demo released this week, after EA is done telling you about their engine change from Ignite to Frostbite (used previously for Battlefield and Need for Speed titles) and before it shows the much-hyped The Journey mode.

Executing a driven shot is not as easy as just hitting a modifier, which is how it goes for finesse (RB/ R1) and chip (LB/ L1) shots. Instead, you need to press the shoot button twice – the first to decide on the power applied on the ball, and the second (just a tap) to make it into a low, driven one. And as with any other shooting mechanism, the quality of it all depends on the player you’re taking the shot with. 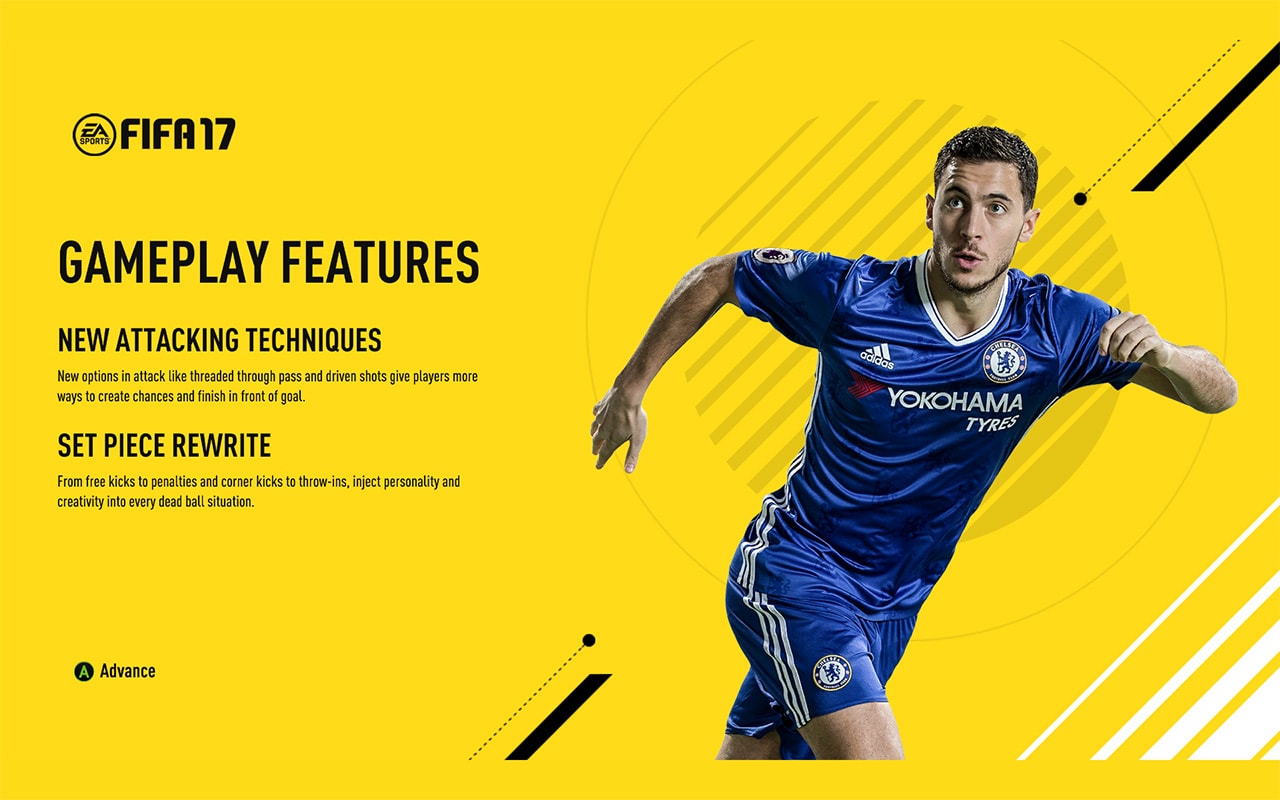 That’s not the only change to how goal-scoring chances are created in FIFA 17, with the addition of mechanics such as threaded through-pass, hold-up play or dropping in short by forwards, and a defence that continually tracks the runs and reads any cues in the momentum change of other attackers.

All of these changes are subtle, and take time to appreciate and even more time to hone. A day into playing the FIFA 17 demo, we’re still picking up on nuances via matches and skill games. The threaded through pass is a difficult skill to master, and if you use it at the wrong time, you’re likely to immediately hand over possession. But it allows you to create the type of opportunities that Real Madrid’s Luka Modrić regularly sets up for his team-mate Gareth Bale, sending the football at a combination of pace and angle that makes you stand up from your seat.

Then there’s the physical overhaul, as EA Sports calls it, responsible for players forming a shield against their centre-backs and defensive midfielders. It lets you create unique one-two combinations with other players, and make a “False 9” out of your forward in combination with the third change: the active intelligence system.

The latter means that players in FIFA 17 demo don’t just keep on trying to get behind the defence, as in earlier FIFA games, but can identify when there’s space in front of it too. This will please the virtual tiki-taka masters, letting them build on their passing skills and patience, as they infuriate opposition defence that had taken to sitting deep – parking the bus, so to speak – by way of tactics.

The new AI intelligence improvements come into play during defence too. So, in a FIFA 17 demo match-up between FC Bayern Munich and Juventus, when right-winger Arjen Robben took a left corner for Bayern (on the opposite wing to where he plays) and the ball ended up being cleared to Philipp Lahm, a right-back who had drifted to the left side of the pitch as well, the other wing men – Franck Ribery and David Alaba – were clever enough to occupy the other flank when possession was lost. Moreover, they didn't just switch wings back while the game was on either, but stayed put on the opposite flank until the ball went out of play. 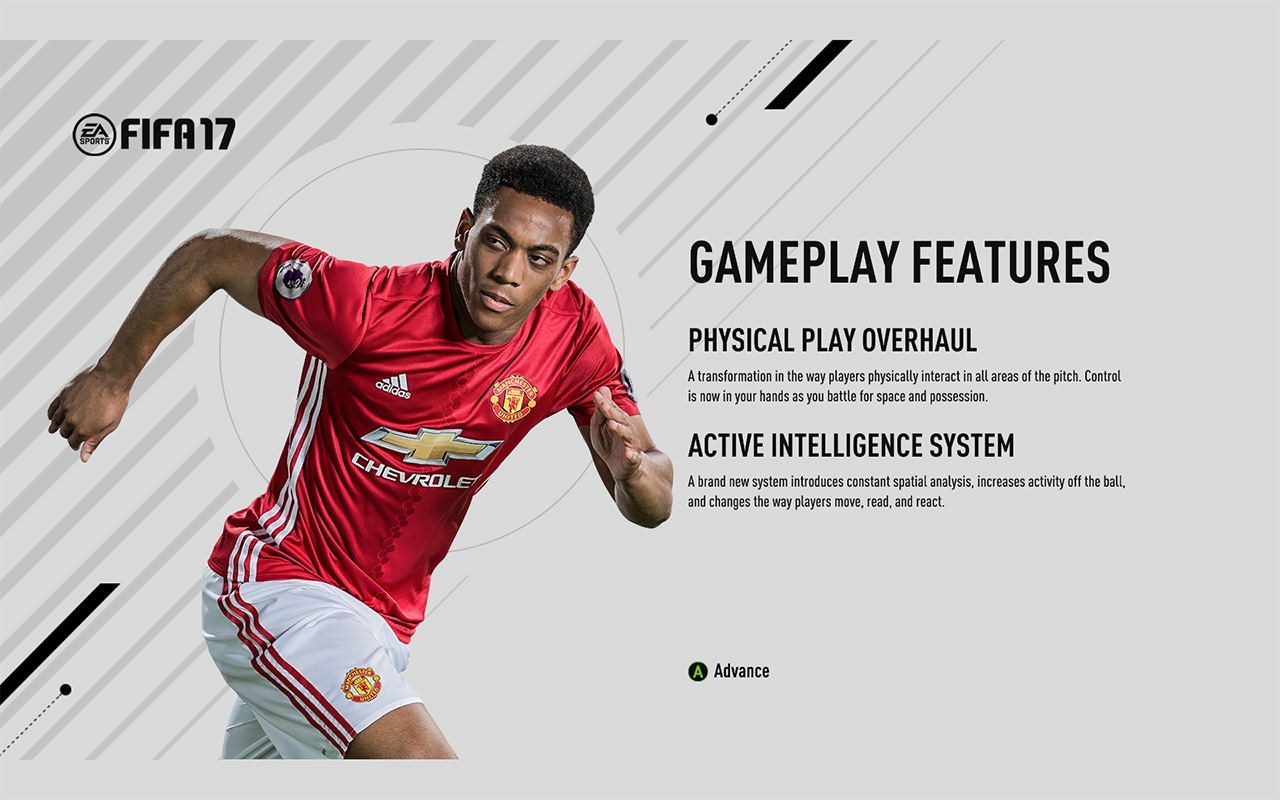 Set-piece rewrite is a win for serious players
The other big change in FIFA 17 is to set-pieces as a whole. Corners and penalties have been altered in big ways, with both now showing the general direction the ball is headed in. With the former, the ability to switch to a player in the box now works differently from before. In previous FIFA versions, you just moved the target player around with the left analogue stick and hit X/ Square when ready, with the power on the ball left to the delivery man. Now, it’s a three-step process: first you decide the power on the ball, then move the designated player around if you wish to, and then tap the cross button again.

The latter – spot kicks – too has undergone a complicated change. Before taking penalties, you can change the angle and distance of your kick-taker from the ball. Once you’re set on that, you push up on the left-stick to motion him towards the ball, while simultaneously also deciding which side of the goal. And as the player nears the ball, you hit shoot (B/ Circle) to score.

The accuracy of the kick depends on the timing and your control of the left stick. You could also easily end up walking towards the ball and just hitting it outside the goal, if you don’t touch the shoot button.

While this might present a challenge for casual players, it will help dedicated ones to set themselves apart with their finesse. Playing with the best teams in the FIFA franchise had a tendency to flatten out the differences between the two sets of FIFA gamers, and these changes should make the better player stand out. 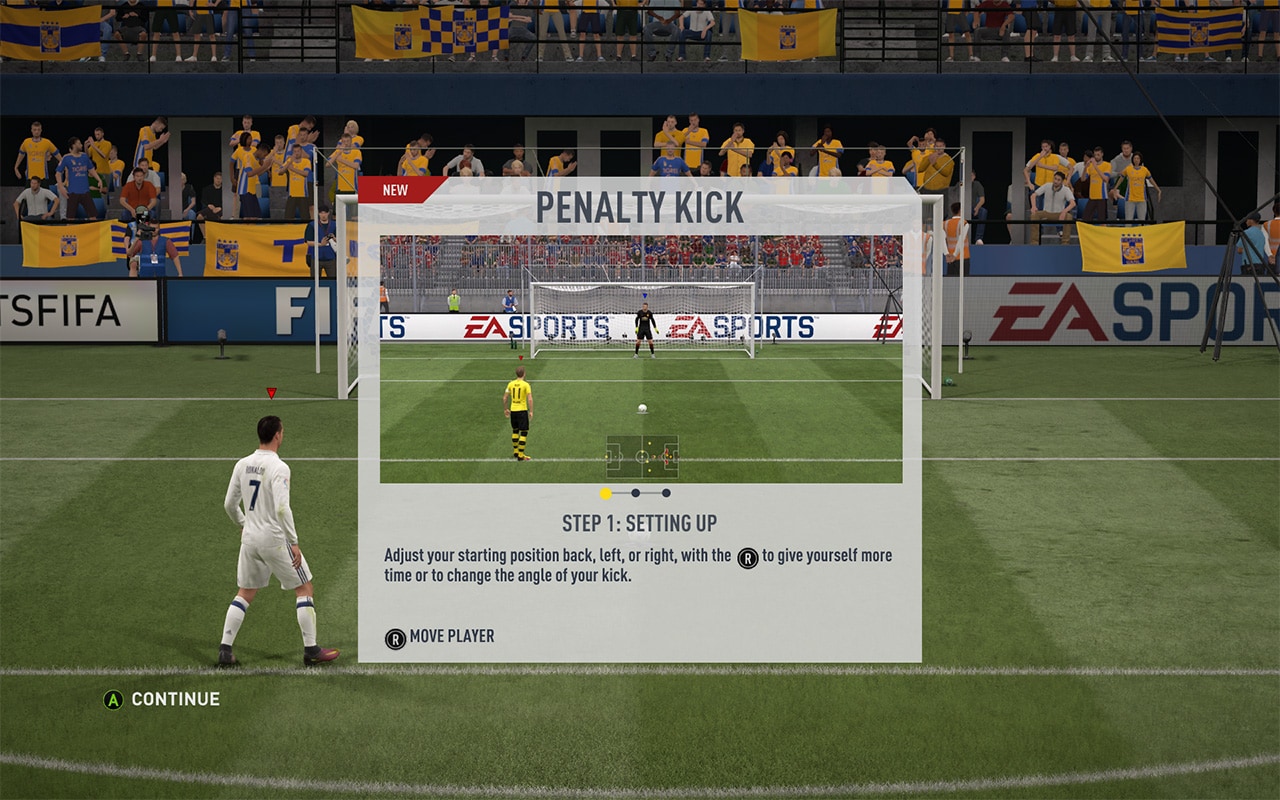 Some problems persist
Anyone who has spent time with Konami’s Pro Evolution Soccer series, the only major rival to EA’s FIFA in the world of football sims, can attest to the fact that the opposition AI performs considerably better when attacking. It sniffs out opportunities, and punishes you if you’re lax at defending. In recent instalments, its clear eye for goal has been helped by the fact that PES has been well designed for counter-attacks, which makes for more entertaining (if less tactical) gameplay.

Comparatively, FIFA 17’s AI - even after the improvements we’ve noticed in the demo - comes across as a dumbed down version. While it’s better than PES at evading your defensive strategy and tackles (more so on the wings), it pales in comparison in and around your box. Too often, the AI will end up pulling the trigger far too early, when it could have piled on the pressure or made the situation much better for itself by looking for a pass.

With the FIFA 17 demo, things have changed slightly. Some of it is obviously down to the “active intelligence system” mentioned earlier, as it works for opposition AI the same as it does for team-mates you’re not in control of. It strings together passes that can open up your defence, and does brilliantly when it gets behind the defensive line. But it still feels hamstrung in most other situations, risking a through ball or a long shot that feels like, well, a long shot the moment the ball leaves the player's feet.

It’s (already) in the game
EA Sports already had a believable replication of the real thing in recent iterations. Where FIFA 15 idolised pace over most other things, making the likes of Arsenal and AS Roma (each with 3 attackers having 90+ pace valuation) genuine contenders for 1-v-1 matches, FIFA 16 toned it down to provide a much more realistic depiction of physical attributes. It made FIFA the tactical player’s dream, with PES serving the lovers of more arcade-like fun.

Despite the engine change this time around, FIFA 17 is mostly an evolution, at least going by the demo build. But the minor upgrades therein might just be key in telling the casual gamers from the crème de la crème. 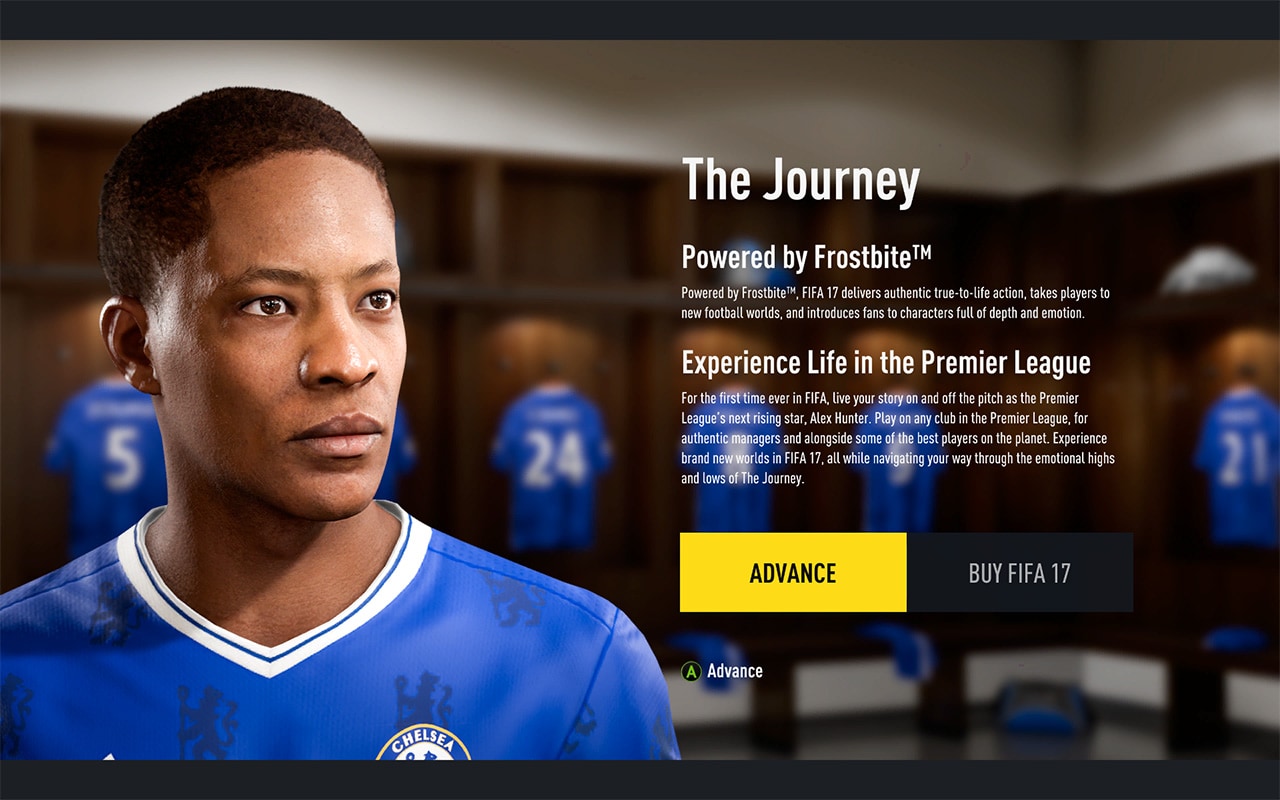 What the demo brings
One of the highlights of FIFA 17, and how EA Sports justified the engine change, is the so-called The Journey mode. It lets you live the life of a pro-footballer, instead of just playing football on the pitch. On the pitch, you use the standard controls as in the Be A Pro mode. Off it though, you have to interact with other players, your manager and even the press – all of it through a dialogue wheel seen in EA’s Mass Effect franchise. And to help build this, EA Sports worked with BioWare, the makers of Mass Effect.

The Journey is also a part of the FIFA 17 demo, in a very limited fashion. You are Alex Hunter, a teenager playing for Manchester United, who is part of the substitutes on the third match day of the Premier League against Chelsea. It all starts with a bit of interaction with your friend called Gareth Walker – who is also a forward, by the way, possibly meant to provide a sense of competitiveness – who is already part of the first XI.

It's an interesting idea. Unfortunately, in its execution, it’s a cringe-worthy addition, showing you the match action through pre-written cut-scenes until it’s time for you to walk onto the pitch with the score at 1-1. You replace Walker, and have around 25 minutes (of match time) to give United the win, after which you go through a talk with the press, this being your first-team debut and all.

Post that, you get a video showing what you can expect from the full version of the mode. From the looks of it in the FIFA 17 demo, The Journey might just mean picking from a set of pre-determined choices off the pitch, with the only freedom available on the pitch. The tease left a poor taste in our mouth, but we’ll reserve our judgement once we’ve spent some time with it after release.

Other than that, it’s a routine affair elsewhere: offering up 12 teams and 3 stadiums for 4-minute half-time, on any difficulty you wish to play. What’s new are the skill games that appear before kick-off, letting you practice types of passing, defence and shooting – with a couple of those solely reserved for when you’re playing with friends.

A word about FIFA 17’s PC performance
We played the FIFA 17 demo on an Xbox One S and a PC with Intel Core i7 4th gen, Nvidia GTX 760 2GB, 8GB RAM and Windows 10. As expected, the game is able to make better use of the extra power in PCs to provide better fidelity. Even on a mid-tier system such as ours, the game ran at a smooth 60fps on 1920x1200 resolution, ‘Ultra’ rendering quality, and 4x MSAA (Multisample anti-aliasing) throughout without any stutter.

FIFA 17 demo is available on Xbox 360/One, PS4/PS3, and Windows PCs via Origin. The full game will release on September 27 in North America, and September 29 in rest of the world.

Further reading: FIFA 17, EA Sports, football simulator, FIFA 17 demo, EA, Origin
Akhil Arora Email Akhil Akhil Arora covers entertainment for Gadgets 360, interviewing stars such as Christian Bale and Anurag Kashyap, covering series premieres, product and service launches across the globe, and looking at American blockbusters and Indian dramas from a global socio-political and feminist perspective. As a Rotten Tomatoes-certified film critic, Akhil has reviewed over 150 movies and TV shows in over half a decade at Gadgets 360. When he is not completely caught up with new film and TV releases, Akhil ...More
Google to Be Investigated by Indonesia for Possible Unpaid Taxes
iPhone Users Can Now Use Siri to Book an Uber

FIFA 17 Demo Gives Enthusiasts the Tools to Stand Out
Comment