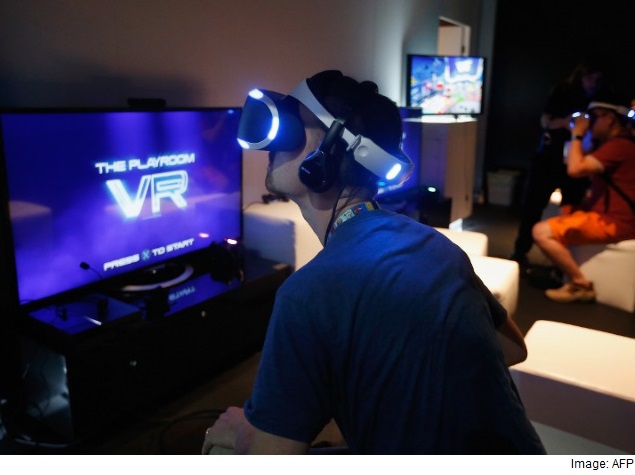 At the Electronic Entertainment Expo in Los Angeles on Tuesday players swooped like eagles through Paris, blasted asteroids, and fought in boxing rings as videogame makers dove into worlds of virtual reality.

The expansive E3 show floor was rich with VR offerings from developers working on games for immersive head gear expected to hit the market in force next year.

Queues were long through the day as people at the world's leading video game trade show jockeyed to experience what it is like to venture into fantasy worlds.

"People love VR," Robyn Gray of Other World Interactive told AFP while showing off a game that transported players to a space arena where they destroyed asteroids with friends.

"It is still like this magical, sparkly Christmas time present."

Gray is a lead designer at California-based Other World Interactive virtual reality studio, which boasted having one of the most popular virtual reality applications at Google's online Play shop.

The game, Sisters, is a ghost story that works with smartphones inserted into Google Cardboard virtual reality headsets.

Other World also boasted a socially conscious app focused on climate change that lets people in virtual worlds see greenhouse gas being spewed around them.

Fly like an eagle
French video game titan Ubisoft had a private room in a corner of the show floor where is let visitors get their hands on and their heads into a game that transformed them into eagles free to fly through Paris.

Sensors in Oculus Rift head gear allowed turns or twists of a head to direct flight, with players flying along streets, zipping beneath bridges, and even swooping through the Eiffel Tower.

Ubisoft was working to have Eagle Flight ready by the time Oculus and Sony release their respective virtual reality headsets, according to Arnaud Antoine, who was overseeing the demos.

Ubisoft also delivered a face-to-face confrontation with psychotic 'Far Cry 3' (Review)  antagonist Vaas Montenegro, who ended the virtual encounter by sending the bound player plunging into deep water with a rock tied to their legs.

"You are the prisoner," Antoine explained of the scene fans of the game would recognize. "If you don't look at him, he gets mad."

Ubisoft is exploring the potential for players in virtual reality to engage with artificial intelligence in video games, according to Antoine. 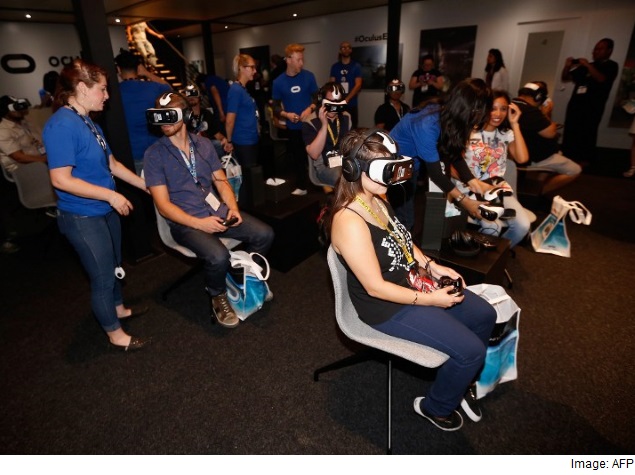 A TrackMania racing game, tailored by Ubisoft for Project Morpheus virtual reality gear from Sony, was set on a twisting, looping track that left a player dizzy.

'Everyone doing VR'
Elsewhere on the show floor, people wearing virtual reality headsets threw punches as they slugged it out in faux boxing rings, or went armed with rifle-like controllers to battle enemies in grim settings.

Analysts expected E3 to be a coming-of-age of sorts for virtual reality, which has been around for decades but remained an unfulfilled promise for gamers eager to immerse themselves in fantasy worlds.

Facebook-owned virtual reality firm Oculus delivered hands-on demonstrations of games, and the Rift head gear was at other booths.

Oculus will begin shipping Rift headsets early next year, but has not mentioned pricing.

The cost of buying into the experience was expected to be driven up by the need for powerhouse computers to render virtual reality video smoothly and quickly.

Rift will come with an Xbox controller due to an alliance with console maker Microsoft.

"Immersive technologies have a lot more to offer than video games, but it is a great place to start," said Gartner analyst Brian Blau.

"Game developers know how to get people immersed in graphical simulations better than anybody; it is natural to think they will be first in line to create content."

Among those checking Oculus at E3 was Andre Goncalves, director of gaming for Comic Con in Portugal.

Virtual reality calls on developers to rethink approaches, taking into account factors such as how uncomfortable head gear might become after hours of play and creative new ways to interact with digital realms, according to Goncalves.

"But, they are on the top of the mountain now when it comes to making games; they will gave to go back to the bottom and find a new way up."