Does Borderlands 2 on PlayStation Vita bring the PS3 to Your Pocket? 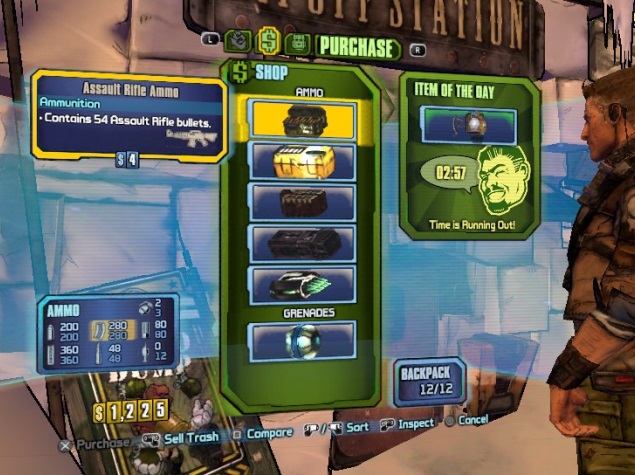 The Playstation Vita is one of the most underrated consoles in recent history. It came out with the promise of delivering the power of a Playstation 3 in the size of a system you could slip into your pocket, but the early adoption was limited, and as a result, the number of games that were available also suffered. The system went through a bit of an indie renaissance, and in many ways, it's the best system possible for games like Spelunky, Guacamelee, Stealth Inc, Hotline Miami and others.

But many would argue that the original premise - of delivering AAA game experiences - has not been met by the system. This is an argument that continues despite the presence of games like Gravity Rush, Killzone: Mercenary, Persona 4, and Uncharted: Golden Abyss.

Borderlands 2 launched on the Vita on Wednesday, and even more than Killzone, this game really highlights the power, and the shortcomings, of the handheld console.

We won't be reviewing the game - since it's fundamentally the same game that was released over two years ago. Short version - Borderlands 2 is amazingly stupid, and also incredibly enjoyable if you are playing it with a friend. If you're playing it by yourself, it's can be tedious, and you're really spending all your time just hoping that the next gun you pick up shoots lightning grenades. 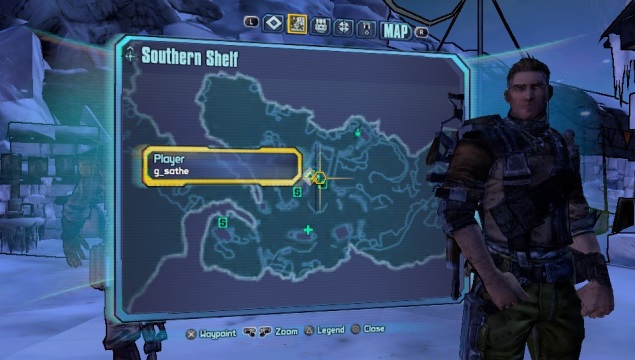 With that said, the question is how the game translates to the Vita. Does the Vita actually live up to its promise of bringing you console quality entertainment while on the go?

Bridging the power gap
On the Vita, Borderlands 2 does not, at first glance, look particularly different from its big-screen counterpart. In fact, the gorgeous OLED screen of the Vita can make things look even better than they do on the television.

Once you start playing though, the visual sacrifices made to get the game to play on the Vita are more apparent. The draw distance is pretty good, but faraway objects are not rendered in too much detail. It's something that you can see pretty early on in the game - enemies in the distance look as smooth as mannequins, and the details pop in as they charge up to you. This happened on the PS3 as well, of course, but the degree was completely different. You won't see snowflakes drifting past your screen and small bits of rubble flying as you drive, but these are small things. They do add to a sense of immersion but even without them, the Vita version doesn't feel like an inferior of the console version. 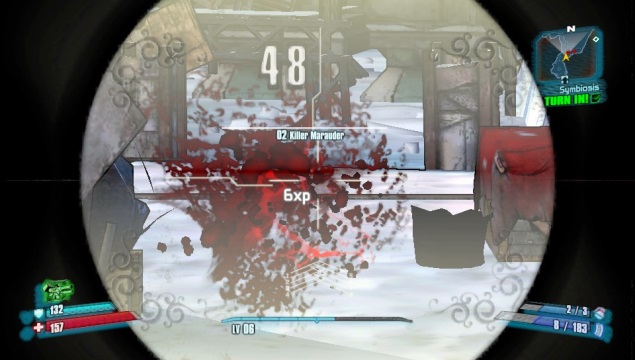 Borderlands games have also been famous for the over the top dismemberment and gore as you killed your enemies, knocking off limbs and causing heads to fly off into the distance. On the Vita, a lot of the animations of enemies taking hits are missing, so the only clue you have (sometimes) that a shot hit is watching the damage numbers fly out of your target. And when you kill an enemy, no matter how, they explode into a fountain of blood and disappear. By not having to draw enemies after they're dead, the game is able to save a lot of processing power, and plays smoothly.

Level loading times are fairly long, but hardly game breaking. On the PS3, it might have been 10 seconds between levels, while here it can stretch up to 20 seconds. Since level loading only happens infrequently, this isn't something that actually affects your enjoyment of the game.

There are some times when the game did slow down while in play. It doesn't happen often, but once or twice, when there were a lot of enemies on screen, things would start to lag. The more enemies that are on screen, the more precise control you need over the game, so these moments can seem even more frustrating, but in over 12 hours of playing, we've only had a real problem twice. That doesn't seem too unbearable. 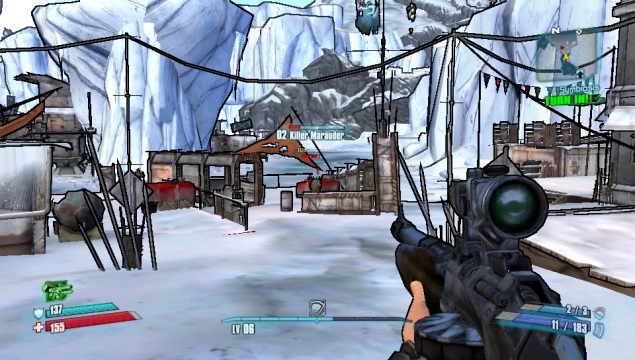 Borderlands 2 on the PS3 is a full featured game with a massive world to explore, enemies to kill, and guns to gather. That's true for the Vita version as well; visually, the game still looks excellent on the Vita - and when the game is in motion, it looks equally impressive. The performance is smooth as well, and in that sense at least, delivers on the promise of bringing the full console to your pocket.

Fewer controls and a smaller experience
But of course, power isn't the only thing - the Vita has fewer buttons, and instead maps controls to the touchscreens on the front and the back of the device. The dual-analogue sticks make it possible to play an FPS, but they've tiny sticks, and making controlled movements in the heat of the action poses its own challenges. And while the screen looks lovely, there's no denying that it's tiny - the game was designed to run on a large television screen, and the user interface is often hard to use properly. 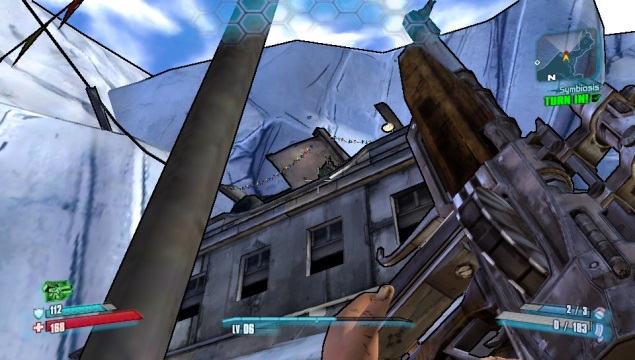 The Vita has four buttons less than the PS3 controller - you are missing two shoulder buttons, and the sticks can't be pressed in for inputs either. To get around this, the functions have been mapped to the two touchscreens on the system, and now, you have to tap the left side of rear touchpad to run, and the right side to melee an attacker. Tapping the front touchscreen on the left uses your special skill, while the right side launches a grenade. In both these cases, it's the lower corner of the screen which triggers the move, so you can easily tap the screen without moving your thumbs too far from the sticks.

In theory, this should work well. In practice, you're often touching the screen by mistake and throwing a grenade at an enemy in a small enclosed space is never fun.

The small sticks are also a problem. Killzone: Mercenary had the same problem, where you were better off finding the general area of the enemy and then strafing around until the crosshairs lined up, instead of trying to aim a clean shot. 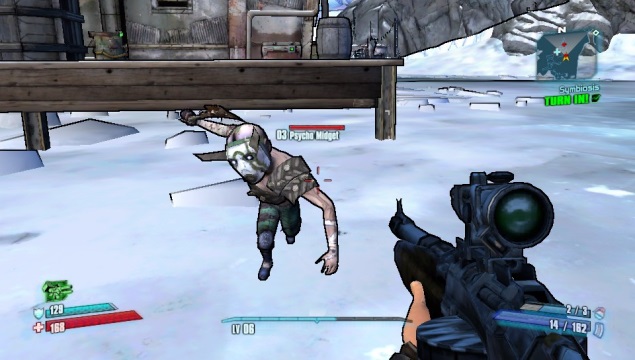 The UI elements also needed a major overhaul from the console version, and in their present form, are definitely annoying. Actually, that's not quite right. On the PS3, Borderlands menus and map are annoying - on the Vita, they're maddening, and might one day cause you to throw your (fairly expensive) game console against a wall, smashing it to bits in a fit of rage.

PS3 in your pocket?
Despite the shortcomings of the controls, there's no denying that Borderlands 2 remains a lot of fun, whether you're playing on the Vita or on the PS3. There's a cross-save function, so you can play on the Vita and then go back to playing on the PS3 too. 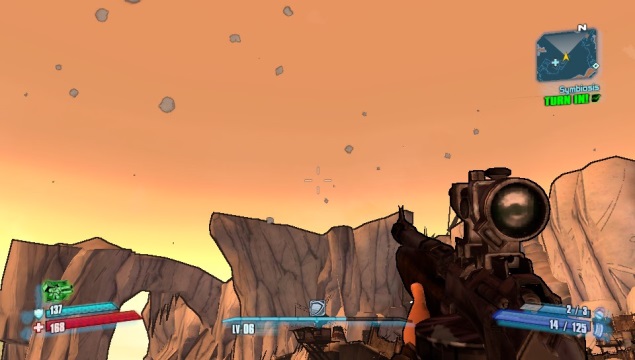 If you're going to make a point by point comparison, then the handheld version definitely suffers. And if you've already paid the full price for Borderlands 2 on your console (and probably also paid for some of the extra DLC) then the Rs. 1,579 price seems unfair. Yet, taken on its own terms, the Vita version of Borderlands offers great value. You're getting most of the DLC including the two new Vault Hunters included in the price of the game, and all of the content of the original game as well.

The structure off the game fits well with the pick up and play nature of a handheld as well - missions usually take between ten-fifteen minutes to finish, so you can play while you commute, then put the Vita away and get some work done. In many ways, Borderlands 2 is a great showcase of what the Vita is capable of. It highlights how much power you have in this device in your pocket, but it also makes a strong case for focusing on indies like Luftrausers instead. That game is a stripped down two tone experience which you would never confuse with a big console game, but the experience is so finely tuned and enjoyable that it is impossible to stop playing - something that just wasn't true with Borderlands 2.