Announced at BlizzCon 2018, Diablo Immortal for Android and iOS is Blizzard's stab at bringing the popular action role-playing game franchise to mobile devices. The Diablo games have long been associated with PC gaming, though that's changed of late with Diablo 3 making it to PS3, PS4, Xbox 360, Xbox One, and most recently, Nintendo Switch. Does Diablo Immortal hold up to the exceptionally polished gameplay of Diablo 3 and its predecessors? Gadgets 360 played a Diablo Immortal demo build on a Samsung Galaxy Note 9 at BlizzCon 2018 to find out.

What struck us before we even started playing Diablo Immortal was the flashiness of its menus. Swapping between the class choices present in the demo such as Monk, Wizard, and Barbarian felt pretty fluid but it was also replete with little flourishes of detail such as specks of ice surrounding the Barbarian's weapons.

This attention to detail extended to elements within the game as well. Picking a Barbarian class character, we noticed that the abilities at our disposal were similar to what one would get in Diablo 3. You can summon a giant hammer, fire chains to rope your enemies in, and spin around the battlefield like the Tasmanian Devil in a Looney Tunes cartoon. What's more is that they were well-animated enough that made us think we were playing it on console or PC, just with touchscreen controls.

Yes, much like every other modern mobile game, Diablo Immortal's controls are virtual buttons. Some of them activate by simply tapping them, while others like firing chains require you to tap and hold to activate them.

Movement is controlled by a directional button on the left side of the screen and while it seemed to lack a dedicated dodge or evade button, the sheer act of traipsing around the Bilefen just felt right.

Diablo Immortal has a penchant of throwing hordes of enemies at you at a rapid clip. It's as if Blizzard and NetEase want to show off how many undead, demons, and Wretched Mothers, it can throw onscreen at any given time. All of these interactions come together in an exceptionally polished fashion because the controls feel intuitive, with helpful icons and tool tips to explain things as you go along. Almost immediately we were slaying demons, opening treasure chests, equipping loot, and using potions with ease. 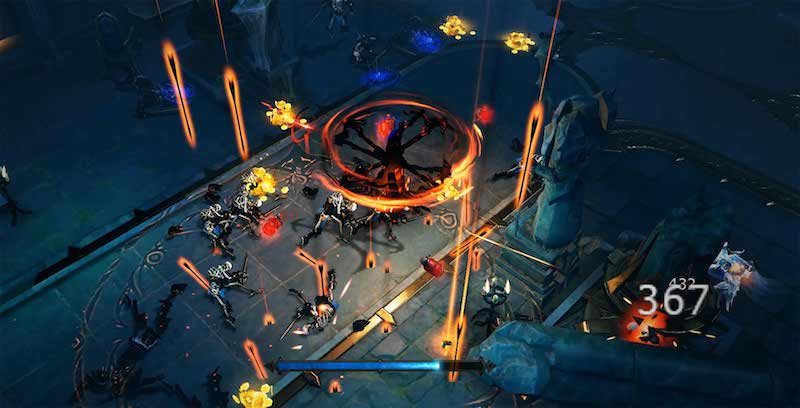 And speaking of loot, the game has a helpful indicator to show off whether a piece of gear you get such as a sword or a gauntlet gives you a bonus over what you're currently using and lets you swap your loot out in a single tap. We don't know how this would impact in-game inventory and item management as that part of the game was cordoned off in the demo.

The Diablo Immortal BlizzCon 2018 demo had us running through a swamp-like area called the Bilefen that ended with a boss fight against a monster known as Purus the Decimator in a sinister-looking structure known as the Court of Madness. Over the course of our half an hour demo Diablo Immortal felt right at home on mobile. It looked fantastic with neat lighting and water effects along with a level of detail that you'd expect from the series on any other platform. Looking at Diablo 3 on the Nintendo Switch version side by side and you can tell that while Blizzard eked out every bit out of the Switch's anaemic (by 2018's standards) specifications, Diablo Immortal looks gorgeous on cutting edge mobile hardware.

Gameplay felt smooth too even with tons of enemies on screen and the Note 9 didn't even get warm. Though a couple of caveats to go with that, for one this demo took place in a controlled environment, and the Note 9 has a somewhat beefy cooling solution compared to most mid-range and low-end devices that make up a bulk of the market.

Other concerns exist. Right now, it's unclear if the game will be a premium or free-to-play experience with micro-transactions. Given Blizzard's history with Hearthstone and Heroes of the Storm, we won't be surprised to see monetisation be a mix of both. What we also don't know is if the game needs you to be online at all times, though if the messages we encountered during the demo were any indication, this seems to be the case.

Finally, while Diablo Immortal ran exceptionally well on a Note 9, we don't know what the final required specifications of the game would entail, which could be a pain point for those with mid-range Android phones or older iOS devices.

Nonetheless, our time with Diablo Immortal showed off a game that could possibly be the best way to play Diablo if Blizzard is sensible with its design decisions. With a beta on the way, it's just a matter of time before we get another, hopefully more in-depth look at this polished role-playing game.