Is Detroit: Become Human Nothing More Than a PS4 Tech Demo?

After four years in development, PS4-exclusive Detroit: Become Human finally has a release date of May 25. With barely a month before it hits the shelves both digital and physical, a demo is out on PSN to give you an idea of what to expect. Unlike most demos this generation, Detroit: Become Human's download size is just 3GB. Created by Quantic Dream — the French studio behind the likes of Heavy Rain, Beyond Two Souls, Omikron: The Nomad Soul, and Indigo Prophecy, it’s an action adventure game with a focus on story-telling above all else. It revolves around androids - of the non-smartphone - variety in a futuristic rendition of Detroit. The Detroit: Become Human demo has you controlling one such android, Connor, whose job is to track down other rogue androids.

The opening moments of the Detroit: Become Human demo have you gathering clues and piecing together details as to why an android decided to kill one of its owners and hold his daughter hostage, dangling her off an apartment roof. Then you’re tasked with negotiating with it. The success of your interaction depends on your ability to discern its motives from the evidence you unearth. At the end of it, the demo shows you a flowchart of your decisions, masking routes you didn’t take, tempting you into another playthrough.

And while this sounds good on paper, the execution is a mixed bag. You’ll navigate the game world — in this case consisting of small areas with closed in camera angles — with the left analogue stick on the Dual Shock 4, using the right stick to interact with the environment. At times, you’re prompted to press a button to pick up a clue like a blood or reconstruct a series of events that led to a victim’s demise. It felt reminiscent of the Detective Mode sections in the Batman Arkham series of games, although sporting less complexity. You’ll scrub through a scene with button prompts letting you fill in the gaps. As you collate every scrap of evidence, an indicator tell you your chances of success in convincing the perpetrator. The controls aren’t as awkward as Quantic Dream’s past titles, but we’ll know for sure when the full game hits next month as each character you control performs different roles, which could see a different combination of buttons that may make it more or less intuitive.

When you think you’ve gotten enough details, you can go ahead and negotiate with the deviant android holding a child by gunpoint on the roof top amidst a hovering police helicopter and accompanying snipers. In this section you’re given a choice of conversation prompts, allowing you to modify Connor’s responses. These range from being sympathetic to being brutally honest about the situation. Your choices determine how willing the hostage taker is to trust you. So you could, for example signal the helicopter to move away from the scene to gain its confidence as you walk towards it or you could truthfully explain that it has no escape, forcing it into a corner and have it act out of fear by jumping off the building prematurely. 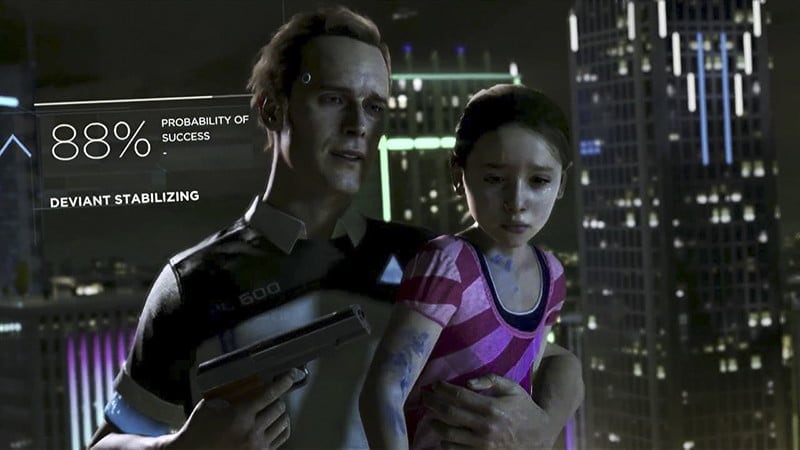 Regardless of your actions, the story continues forward in the full game. In the Detroit: Become Human demo however, you’re shown the aforementioned flowchart egging you on to check out your options. This one section starring Connor had six possible outcomes, of which we unlocked two — both with wildly different endings, and we’re curious to see what we missed out. How Quantic Dream utilises this technique in the full game has us piqued as each section impacts the next, possibly allowing for a completely different story and perhaps an ending that’s far from predictable.

All along the way, we were treated to stunning visuals. From blue android blood splatters to the highly detailed faces of its protagonist and supporting characters make us optimistic of Detroit: Become Human’s production values. That said, the controls and gameplay elements that connect vast swathes of its story are yet to be ascertained due to the small scope of the demo and the fact that other playable characters have totally different roles in this narrative that aren't present in this slice of the game. Perhaps Detroit: Become Human has more depth to it. We're cautiously optimistic, though it could simply end up being a tech showcase for the PS4 and PS4 Pro’s graphical prowess and little else.

Is Detroit: Become Human Nothing More Than a PS4 Tech Demo?
Comment