What Asus, Flipkart, Intel Are Doing to Take Gaming to the Next Level in India

One out of every three gaming laptops in India is sold via Flipkart, the e-commerce platform claims.

Gaming is still at a nascent stage in India. Nevertheless, many believe there is a huge potential of growth for the gaming industry in the country, given the size of the market that has a large number of Internet users, especially young people who tend to be the early adopters. A report released by Deloitte last year pointed out that due to the high growth potential of the gaming industry in India, many foreign entities are exploring possibilities to set up their local operations. Among players that are already present in the market, Asus, Flipkart, and Intel have partnered to expand gaming in the country.

Last month, Asus launched its new ROG-series gaming laptops and desktop models based on ninth-generation Intel Core processors to please gamers and esports enthusiasts in India. The Taiwanese giant has also tied up with Flipkart to sell its new offerings through the online marketplace.

Prakash Mallya, Vice President and Managing Director of Sales and Marketing Group, Intel India, at the sidelines of the Asus launch in New Delhi told Gadgets 360 that the explosive growth of the Indian gaming industry has made this one of the most thrilling times in the PC market.

"India is moving towards comprehensive local development of the gaming industry — driven by factors such as an increase in disposable income, ubiquitous Internet, an expanding digital payment user base, and localised games,” Mallya notes.

Notably, Intel is one of the key enablers for gaming laptops and desktops in India and elsewhere. Apart from offering processors for gaming-focussed and other product offerings, the Santa Clara, California-based company is amongst the leading promoters of esports tournaments in the country. For instance, Intel backed the ESL One esports tournament that was held in Mumbai in April this year.

Similar to Intel, Asus has its ROG aka Republic of Gamers brand that hosts various community events for gamers in India.

Intel's Mallya underlines that it has become important for companies like Asus and Intel to understand what the industry requires, and in their experience, gamers need not only good hardware but also an active community.

"Unlike a regular PC user, a gamer wants to interact with other gamers even when they get a new game or an accessory,” he explains.

He adds that it is the growing community of PC gamers in the country that has made gaming the fastest growing PC segment.

Having said that, the executive believes that the lack of understanding of esports and considering gaming merely as an activity for fun are the two big challenges in India.

Asus India Regional Head for India and South Asia Leon Yu highlights that many Indian parents don't want their kids playing games or believe that gaming is only meant for leisure time.

"Traditional parents in India still think that they should provide diverse learning to their kids, and they don't want their kids to spend too much time on gaming," says Yu.

Agreeing with Yu's comment, Mallya emphasises that several people in India don't realise that gaming can be a career option too.

"Many of us don't even know how esports is different from regular PC gaming," he continues.

Asus and Intel are, therefore, working together to bring awareness and boost gaming in the country.

On the hardware front, Asus is developing new ROG laptops, desktops, and gaming accessories. Intel, on the other hand, is launching its fresh silicon to offer what gamers want in India. Both companies are also trying to bring affordability to the gaming segment to attract new gamers in the price-sensitive market. 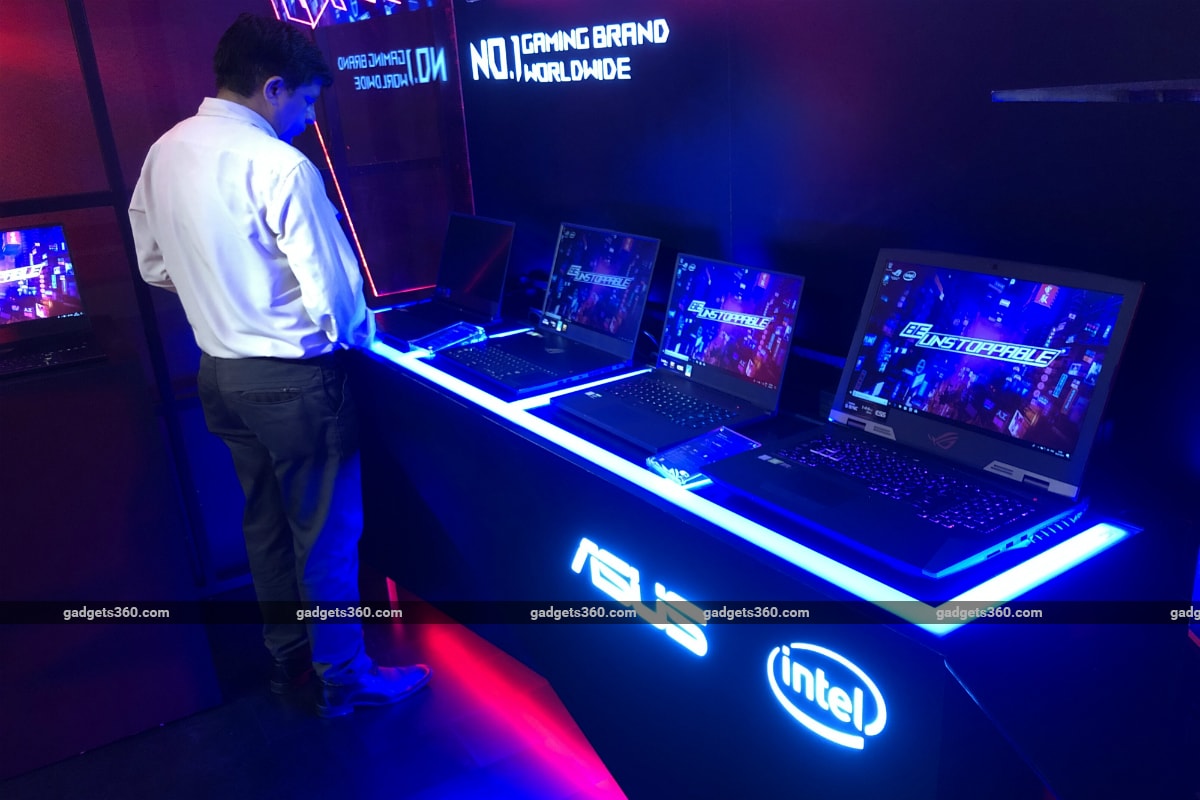 "The gaming community wants the latest and greatest experience and we're always looking for ways to push our technology to the limits when it comes to enabling performance across CPU and GPU, form factors and new technology on the PC platform," Mallya tells Gadgets 360.

Asus and Intel are also leveraging the extensive reach of Flipkart in India to bolster delivery of what they have for the market.

Flipkart Vice President and Head of Private Labels, Electronics and Furniture Adarsh Menon claims that one out of every three gaming laptops in India is sold via the online marketplace. "Gaming laptops [category] is the fastest growing segment within Flipkart's laptops category," he tells Gadgets 360.

"We found that gamers were looking for a better gaming experience like high FPS (frames per second), so based on this insight we have enabled selection of laptops with 120/144Hz screen refresh rate compared to the traditional 60Hz screen," states Menon. "We also identified casual gaming as a big opportunity."

Flipkart also hosts "Gaming Fridays" on every Friday to offer gamers a one-stop place to buy gaming devices, accessories, and games of their choices.

Asus has three of its own ROG stores in India through which it showcases and sells its gaming offerings. These stores are located in Kolkata, Bengaluru, and Bhubaneswar, and there are plans to open a fourth one in Hyderabad.

Yu says that Asus is aiming to grow its presence from the existing 40 percent market share of the gaming laptops market in India to 50 percent by the end of the year. He also tells Gadgets 360 that the company is planning to launch a scholarship specifically for gamers.

Additionally, Yu underlines Asus is set to continue its focus towards the growth and expansion of esports in the country.

"We keep doing our part to make sure that okay we are serious in investing in esports and show that esports is not just a waste of time for kids,” he affirms.

Just like Asus, Intel is bullish about the growth of esports in India and has plans to continue its journey with Indian gamers.

"Esports is taking over stadiums, quickly surpassing many other sports in terms of viewership and investment," says Mallya. "Gamers are also highly engaged, enthusiastic about their technology, and continuously seeking bigger and better experiences."

"India continues to be focussed on driving technology innovation and supporting the ecosystem to elevate PC gaming for the community," Mallya states.

What Asus, Flipkart, Intel Are Doing to Take Gaming to the Next Level in India
Comment