Asus ROG Academy will recruit six candidates who will then be put through professional training. 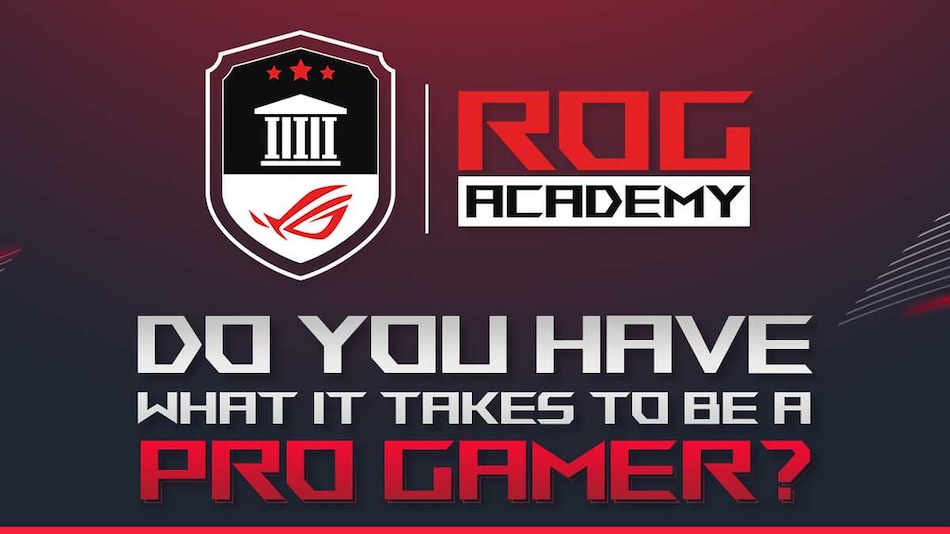 Asus ROG Academy is a new virtual initiative by the Taiwanese PC, component, and peripherals maker, aimed at enabling gamers in India to showcase their skills and get a chance to become professional e-sports players. Asus, with help from AFK Gaming, will organise this programme and pick six contestants to be part of the ROG Academy. Here, they will be put under the tutelage of professionals who will mentor, train, and guide them towards the goal of representing Asus ROG locally, as well as globally. With the significant growth of gaming in India especially in the last year owing to the pandemic, people can now have a virtual platform to not only compete with others, but assess e-sports as a legitimate profession for themselves.

ROG Academy is a year-long programme divided into four quarterly sessions that focuses on one of the most prominent games in the e-sports scene, Counter-Strike: Global Offensive. Registration will start from February 1 and last till February 10.

Players will go through a rigorous selection process to make it to the top six and get a chance to be part of the academy. As per the companies, the final six players will be given Rs. 1,00,000 after successfully completing their three month training. They will also get a stipend of Rs. 15,000 along with a bonus on monthly basis during the training.

We spoke with Arnold Su, Business Head, Consumer and Gaming PC, System Business Group, at Asus India and Siddharth Nayyar, Co-founder and Director of AFK Gaming to get some insight on ROG Academy, the selection process, its potential, and more.

Gadgets 360: In terms of the overall gaming market in India, how big is it and what's the growth potential?

Arnold Su (AS): Gaming can be segregated between hardware and software. In terms of hardware, PC gaming since 2016 has seen phenomenal growth. From 40,000 units of gaming PCs sold in India in 2016, the number went up to around 350,000 units last year. In terms of e-sports audience in the country, it should be around 17 million as of 2020.

Siddharth Nayyar (SN): The general gaming market has grown a lot as mobile has probably proven to be a gateway into the PC gaming e-sports space. People went from mobile gaming to PC gaming and invested in laptops and PCs to get a more immersive experience. People are jumping on to e-sports with CS:Go, Valorent, and other games. Even more games and engagement is expected in the competitive space as companies like Riot and Valve are investing in the e-sports space, testimony to its growth potential.

AS: ROG is investing in the youth of India and there is a large group of people in that demographic, one of the key reasons for the investment. Additionally, online gaming and gaming in general has grown a lot thanks to data plans becoming much more affordable in India. However, there are certain challenges for professional e-sports – infrastructure.

Why now, where did the idea come from, what do you hope to achieve?

AS: In countries like China, US, Europe, Korea, and others, e-sports is already an industry, just like cricket and IPL is in India. Since 2017, Asus organised the ROG gaming tournament in India and over the last two years, Asus had its own ROG TiTans team to participate in gaming tournaments in India. So there is scope for more talents.

The coronavirus pandemic and subsequent lockdowns stopped physical events since March 2020 and though it wasn't possible for players to come together for tournaments, the ROG Showdown tournaments attracted lots of gamers. And, 40 percent to 50 percent of the participants are the same group of people. Which brought up the point of why not make more people ready and skilful to be part of esports tournaments? That's how the concept for ROG Academy came up. With ROG Academy, Asus aims to provide proper training to make gamers them more skilful and make them capable of competing across the globe.

SN: It's a first of its kind programme and disruptive to the e-Sports space.

With respect to the pandemic, what's changed in the past year, has gaming been affected?

AS: The gaming industry boomed. Since the choice of entertainment was reduced, people flocked towards gaming. And, when people started gaming at home, the demand for better hardware increased, and Asus being a hardware company benefitted. Casual gaming became popular during the pandemic and so e-sports is also expected to become more popular. This trend will continue even after the pandemic.

SN: With no disrespect to those that suffered because of the pandemic, the gaming industry did benefit. The natural progression for any gamer kind of went from mobile or laptop to better laptop or better PC, and people became regular.

How do you plan to go about this course; what are the selection criteria, faculty, material covered?

AS: AFK Gaming is helping Asus with the execution of ROG Academy. The basic criterion for applicants is that they should be 16 years and over. Applicants who are between 16 and 18 years of age will need consent from their parents/ guardians to take part in the programme. 18 and over can apply directly. And, the selection process involves two phases.

SN: Phase 1 of the selection process will involve a trial to determine a player's skills in CS:GO. There will be a robust and thorough theoretical and practical analysis. The first level will be a online selection form that involves questions based on the role they choose (sniper, IGL, rifle). 50 candidates will be shortlisted and as part of Phase 2 and will have to play CS:GO in mixed teams on a server hosted on SoStronK. Marzil and the team from SoStronk will assess the players who will then be shortlisted to 20. Then, there will be a mini tournament to assess how the players perform in a competitive space. And, a jury consisting of CEO of AFK Gaming, Arnold from Asus, and CEO of SoStronK will judge secondary aspects of the players. Six people will then be selected from the 20 candidates.

How do students participate online, what will they need?

SN: There is a recommended setup but it depends on how well you play. Players can use their own setups and should preferably have below 50 ping and the finalists will get equipment from Asus training sessions.

AS: The key is to bring this opportunity to a broader gamer base so as long as they have a basic setup, are able to play and participate, they are welcome.

What can someone hope to get out of this?

AS: Asus wants to give players a platform for e-sports. Similar to training cricket players, selected candidates will be trained at CS:GO. ROG Academy aims to make them understand that this is the kind of training needed to be a professional player. After three months of training, they will get an opportunity to represent Asus and ROG in India, as well as globally. As of now, the focus is only on CS:GO and other games will be added later on.

What are the key challenges that you've seen in the Indian e-sports market?

AS: Infrastructure and broadband have been the main issues, but the situation is improving. The overall ecosystem in India in terms of gamer base is improving.

SN: We could improve on reaching out to tier 2 and tier 3 markets in India as there is a strong gamer base. Not just mobile but PC gaming and e-sports as a whole will benefit if we are able to reach out to this market. Gaming in India will phenomenally skyrocket by exposing those markets to good internet and Asus laptops.

Would ROG Academy be limited to PC gamers or would it be available for both PC and mobile gamers?

AS: Gaming ecosystem is quite huge including console and mobile gaming. We are happy to see more and more vendors are investing in the gaming industry which can change the perception of gaming in India. Parents initially used to be sceptical about gaming as a profession but it's changing now. E-sports will be part of 2024 Olympics as a medal sport which will further change the perception of parents.

SN: The stigma around e-sports is lifting as conversations become open and more commonplace.

AS: For now, the focus is on PC games.

In what ways Asus will support gamers through the initiative?

AS: For final selected candidates, equipment for training, professional curriculum will be provided. After that, they will be given them a chance to represent Asus and ROG.