The latest game in the Assassin's Creed franchise, Assassin's Creed Syndicate, released last week and this latest open-world historical adventure [manages to stave off any potential fatigue of its yearly release cycle. Set in 1868 London you'll don the dual roles of Evie and Jacob Frye, twin assassins with their eyes on freeing the city from the grip of its tyrannous ruler - Richard Starrick. Here's what you need to know to own the streets of London.

Know your assassin
Evie and Jacob might both be assassins, but there's a big difference in the way they both handle. You can't choose whom you're playing as for story missions in Assassin's Creed Syndicate, but you can pick between the two the side-quests. If you're faced with missions that require discretion, then Evie is the way to go thanks to her emphasis on stealth. And if you feel the need to punch your way out of a level, then Jacob is a better bet. Aside from stealth and strength, they each have different skills which you'd be wise to unlock as they make the second half of the game a whole lot easier.

Aid your allies
As you progress you'll befriend several characters, from the assassin Henry Green to an urchin looking to free child labourers, they're a colourful bunch. But they have their uses as well. Completing Assassin's Creed Syndicate missions for your allies, be it bumping off gang leaders or freeing child labourers from factories, these give you access to better equipment and experience points that make the main story missions a lot easier to play. 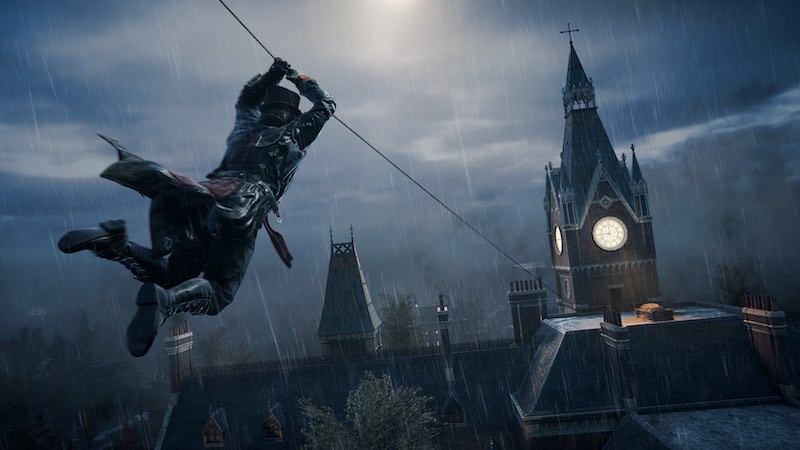 The environment is your friend
Early on in Assassin's Creed Syndicate, you'll notice that certain objects in the environment can be manipulated. From dropping crates on enemies to creating a cloud of hallucinogenic gas that results in entire hordes of opponents going mad, there's a lot you can use to create mayhem. In order to make the most of it, you'd want to be stocked up with throwing knives and poison darts. Environmental advantages aside, they're great ways to clear an area with minimal fuss.

Speed across buildings
One of the newer additions to Assassin's Creed Syndicate is a rope launcher. You can use this to shoot to the top of a building minus the tiring climb. It works like the grapple gun in the Batman Arkham series of video games. However the rope launcher also lets you assassinate targets below you, making it handy if you're quietly trying to defeat several enemies in a location. You'd be wise to make full use of it during your playthrough, be it for traversal or assassination.

These are some of the tips you should follow to get the best out of Assassin's Creed Syndicate. What are your strategies? Let us know via the comments.