Playing as Alexios or Kassandra ties in to the game's conversation system as well. Much like role-playing game franchises such as Mass Effect, Dragon Age, and Witcher, you will, at points of play, be able to choose your responses to its non-playable characters. While they aren't colour coded or telegraphed to allow you a specific good or bad outcomes like they are in the Mass Effect games, Ubisoft seems to have used tone as a deciding factor. 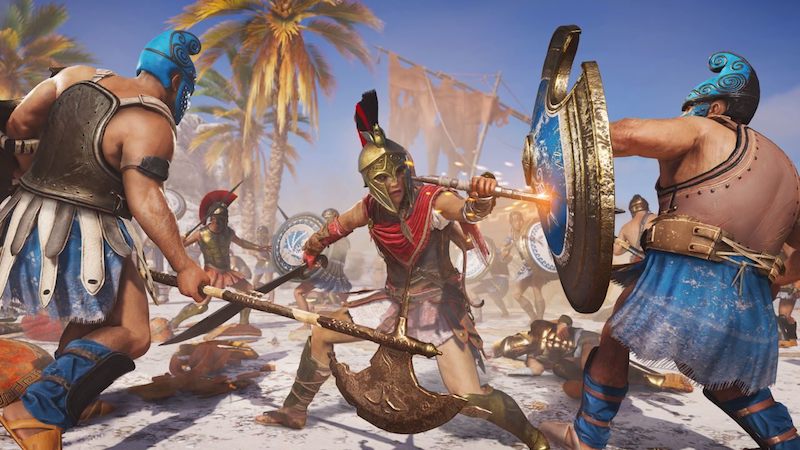 As Kassandra, we noticed this first-hand with the game letting us choose between haughty, matter of fact, or flirty responses to a mission debriefing, resulting in amusing consequences. Choosing a mix of haughty and flirty answers resulted in our quest-giver assuming we were interested in her, resulting in some truly cringe-worthy/ funny dialogue bits. Our conversation options weren't signified with icons either, as they are in games Dragon Age. Instead, you'll actually have to read the entire sentence before deciding the tone you want your character to adopt. This has us intrigued for what to expect in the full game with your choice of dialogue impacting how your character is perceived.

Furthermore, while the moment to moment combat is a dead ringer for Assassin's Creed Origins — right down to every single stab and parry — there's an intricate set of skills that let you customise the experience even further. These fall into three categories — Hunter, Warrior, and Assassin, and impact ranged, melee, and stealth proficiency of your character. You can learn how to Spartan kick enemies 300-style, tame wild animals to aid you in battle, or shoot arrows that can go through walls, to name a few.

The expanded range of abilities at your disposal not only keeps combat fresh, but opens up new ways to play. During an infiltration mission, for example, we found ourselves resorting to kicking off ledges as many foes as we could and not just to hear their comedic screams as they fell to their doom either. Using skills like the aforementioned Spartan kick is a potent way to thin the game's endless hordes of enemies. Here in Assassin's Creed Odyssey, your choice of skills determine your play style as compared to the approach in Origins that simply granted passive bonuses like increased health.

While our time with Assassin's Creed Odyssey showed off a polished, great looking adventure, it will be interesting to see how its gameplay holds up over a longer period of time. More so with its developer's hinting at some interesting late game possibilities such as squaring off against monsters from Greek mythology like Medusa. Stay tuned for our full review closer to launch. Assassin's Creed Odyssey is out October 5.