Are You Still a VR Skeptic? So Is Nintendo.

Everywhere you look at E3 - the annual Electronic Entertainment Expo gaming conference - there seems to be something pitching virtual reality.

At the Nintendo booth, there's only calm, traditional video game playing. In fact, there is only Zelda, and it is totally wrapped in fantasy.

I asked Reggie Fils-Aime, president of Nintendo of America, why Nintendo isn't pursuing the big trend of the moment. He said Nintendo still isn't convinced about the full mainstream potential of virtual reality. The company has, of course, experimented with the technology before - namely in the form of the much-maligned and yet still well-remembered Virtual Boy. That experience, in fact, may be a factor in the wait-and-see approach the firm is taking now.

"Nintendo views these technologies as needing to be mass-market ready and approachable to consumers from a value perspective in order for us to really go after them aggressively," Fils-Aime said.

So far, Nintendo hasn't seen evidence that virtual reality meets that standard. So it's keeping quiet while heavy VR pitches keep coming from Microsoft and Sony - particularly Sony, which will start public demos of its PlayStation VR in Best Buy and GameStop locations starting Friday.

It's an interesting path to take for Nintendo, which went for a decidedly non-traditional, almost low-key, approach to the expo this year. Microsoft and Sony have developed an intense hardware rivalry that has - in some respects - left Nintendo behind. While Nintendo has announced that it will release a new console called the "NX," there was little to no discussion of the company in the many pixels spent on the next coming console war.

While virtual reality may not be that appealing, when it comes to augmented reality - the blending of the virtual and real worlds - Nintendo sings a different tune.

Fils-Aime (that's "fee-suh-may," for the curious) said experiments here have proven more useful, both with the company's handheld 3DS and with its forthcoming mobile game, Pokemon Go, due out next month. Pokemon Go is being made in partnership with Niantic, and allows users to capture and fight their Pokemon through their smartphone cameras.

Nintendo is also working on releasing four more mobile games in partnership with the Japanese developer DeNA, featuring the worlds of "Animal Crossing" and "Fire Emblem." After spending many years resisting calls to go into the mobile space, the company now looks at mobile as one of the core pillars of its business. 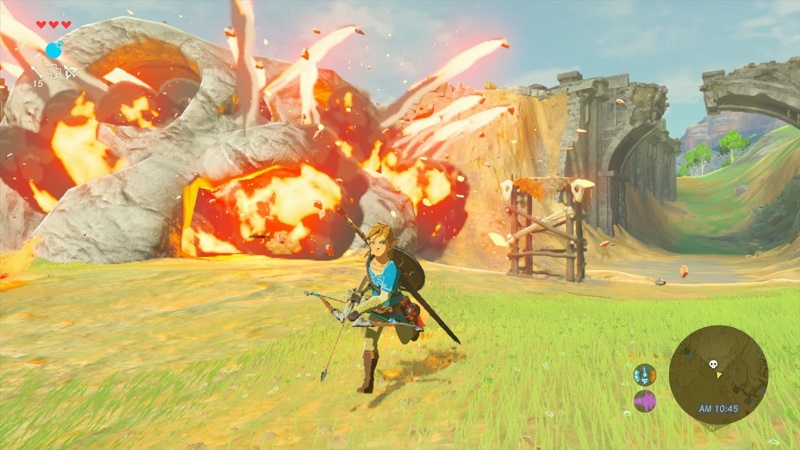 "No IP is off the table," Fils-Aime said - a fancy way of saying that we'll see more mobile games featuring fan favorites from Nintendo in the future.

Not that you'd find any of that stuff at the E3 booth here. The company's entire showroom floor display is devoted to its newest Zelda game, "Legends of Zelda: A Breath of the Wild." In the half-hour or so of gameplay I got with the game, I was blown away by the breadth of the world - you can travel to and climb pretty much anything you see. You probably need a couple of hours to fully get a grasp of the title, but it feels like a fresh, ambitious approach to a very familiar story.

It may even be too familiar, for some. The major cloud hanging over Zelda right now is Nintendo's response to fan requests for the option to play as a female protagonist in the game. Zelda producer Eiji Aonuma said in a telecast, via translator, that the company did discuss this idea but ultimately couldn't figure out how to make the story work with a female lead.

That led to swift (and not entirely unwarranted) backlash for what is, honestly, sort of a ridiculous answer. Creative license is one thing, but it can't be that hard to come up with a female protagonist. There are many games at E3 this year with female and black leads, and they've all managed to do it without making it feel forced. Fils-Aims himself pointed out that Nintendo did that as far back as 1986 with Metroid, and it allowed for a female protagonist in "Hyrule Warriors," a game released early this year and set in the Zelda universe. Still, surely we could do something as simple as flip the script and have Zelda seek out and/or rescue Link?

Fils-Aims, however, mostly held the company line. He said this latest Zelda was designed to feel very true to the old games, and therefore kept the traditional roles in place from the older games. But he did leave the door open for something else in the future.

"It's a creative decision," Fils-Aime said. But Nintendo is "not at all closing off the potential in the future to do something different," he added.

Nintendo does think about diversity in its game design, he said, but through the lens of determining what will produce the best game possible. That can sometimes mean having a male lead, sometimes it means having a female lead.

Not to mention, of course, protagonists that are dinosaurs, robots and gorillas. Nintendo seems determined to keep traveling its own path.