Age of Empires Definitive Edition Looks New and Plays the Same, Which Isn't a Bad Thing

Age of Empires Definitive Edition is a remaster edition of the first game in the Age of Empires franchise. It is scheduled to release on February 20. The game was originally due to release in October 2017, but when it was pushed forward, we made the most of it by revisiting Age of Empires II HD. Now, we got a chance to play the multiplayer closed beta, and here are some thoughts so far.

Can Microsoft Successfully Revive the Age of Empires Franchise?

First, the good news — the time we spent with the multiplayer beta for Age of Empires Definitive Edition convinced us that the spirit of the first game is still intact. All the civilisations that we loved commanding on the battlefield, from Roman to Yamato, are there in the game and their technology trees are true to the original game. It’s no surprise that the Definitive Edition looks very good. It’s not just the art, but also the animations. Buildings that crumble to dust as you destroy them and the units that die through the course of the game look eerily realistic. Every single unit and structure that we came across looked very nicely designed such as Phalanx, cavalry archer, and even the storage pit. These are the kind of details that convince you that a significant amount of work has gone into this game and it’s not just a nostalgia oriented rebadge.

We had no difficulty in finding players online to play with us during the closed beta testing period. The beta allowed us to play multiplayer via LAN and online, and the experience was mixed. The way this works is that you create a lobby and wait for people to join. You can invite your friends or play with strangers on the Internet, and this process is quite simple. Before starting the game you can check your latency (or ping as its known, helpfully shown in different colours, from green, yellow and red - indicating good, okay, and worst) in the lobby and if it’s not optimal, you can choose to find a game with better ping.

We tried playing online with people based in the US and Europe, and in both cases the game was barely playable thanks to terrible ping. The game would stutter a lot and moves we’d make would take a long time to reflect in game. We then fired up an online game with a colleague sitting in the same room, and had a much better experience. You can add up to six AI players in Age of Empires Definitive Edition, which lets you create some fun experiences such as you and a friend allying to take down all AI players. 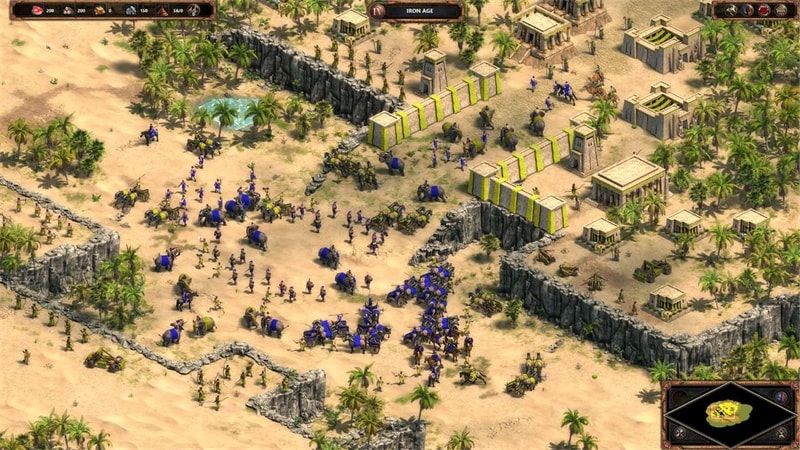 Surprisingly enough, in the closed beta the settings menu didn’t allow us to change the resolution or modify effects like weather or unit detail in-game. Not that this bothered us much, but some players might want these features and we hope a certain degree of flexibility and customisation makes it to the final game. The way Age of Empires Definitive Edition plays is quite similar — you gather resources, you build armies, and you attack your rivals to win. The core gameplay, including how exploration and resource gathering works, is pretty much the same. If you were expecting a radically changed game, look elsewhere.

What this means is, by modern RTS standards, Age of Empires’ focus is still a bit too much on resource gathering and building massive armies as opposed to wartime tactics and unit management you see in the likes of Company of Heroes, and the Dawn of War series.

Nonetheless, there are a few noticeable additions, such as a welcome sense of balance that rears its head ever so often. In the multiplayer games that we played, we noticed all players scrambling to build armies of 100 infantry and 50 ships to attack en masse. One player we encountered had an unusual obsession with archers and his army comprised of around 100 archers and he tried to defend his base with lots of towers. This approach failed when faced with an army of siege weapons such as catapults, so you’ll need a well-rounded approach to creating your armies to counter various enemies. Throw in a higher population cap - which allows for larger armies - and encounters were far from the small skirmishes that make up most modern strategy games. There’s a sense of scale which could shake up how multiplayer matches shape up as well as its single-player campaign.

What we’ve seen so far with Age of Empires Definitive Edition is good, but without playing the single-player campaign, we can’t really say whether the game lives up to the quality of the original just yet. The cheat codes from the original game still work, but we wish the developers had improved the looks of cheat units such as the Winsette’s Z car that fires devastating explosive arrows, which sports sprites from the late 90s that look out of place in a game from 2018. We don’t approve of using cheats in the game, so this is just a minor quibble.

Aside from this, the quality of visuals and promise of improved gameplay thanks to higher population limits could result in grander encounters that promise to amp up the intensity of the single-player campaigns as well as multiplayer and we can’t wait for Age of Empires Definitive Edition to release.

Age of Empires Definitive Edition release date is February 20 and is exclusive to the Windows Store for PC. It’s priced at Rs. 574 ($20 in the US).

Further reading: Age of Empires, Age of Empires Definitive Edition
Pranay Parab Email Pranay Pranay is in charge of podcasts and videos at Gadgets 360. Over the years, he has helped build the tutorials section of this site from the ground up, got the Guide section off the ground, started two podcasts, written several in-depth features, reviewed fitness gadgets, handled social media and most recently, taken charge of videos as well. He loves travelling, particularly to places not frequented by tourists. He keeps running half-marathons across the country and hopes to complete a full ...More
Dragon Ball Fighterz Not Available in India Officially Due to Distribution Rights Issue
Black Panther Release Date, Cast, Soundtrack, Post-Credits Scenes, and Everything Else We Already Know