Wolfwalkers on Apple TV+, from director Tomm Moore, is the culmination of a thematic trilogy â€” dubbed the â€œIrish folklore trilogyâ€, it consists of the Oscar-nominated The Secret of Kells, and Song of the Sea â€” that stretches over a decade ago. And for the third and final chapter, Moore (along with co-director Ross Stewart, and writer Will Collins who also wrote Song of the Sea) brings in the myriad themes from his previous ventures, about parenting and man's relation to nature, and marries them with new ideas that are a lot more political than before. And of course, it's still got fantastical elements (in this case, humans who can control wolves). Wolfwalkers then is a movie that works equally well for children (the primary target audience) and their parents (who'll be sitting alongside them).

English hunter Bill Goodfellowe (Sean Bean) and his rebellious daughter Robyn (Honor Kneafsey) travel to Ireland to hunt down the last wolf pack. But everything changes when the young apprentice befriends a free-spirited girl—Mebh (Eva Whittaker)—from a mysterious tribe rumoured to transform into wolves by night. As the two girls search for Mebh's missing mother, Robyn uncovers a secret that draws her into the world of "wolfwalkers" and she risks turning into the very creature her father is on a quest to destroy. 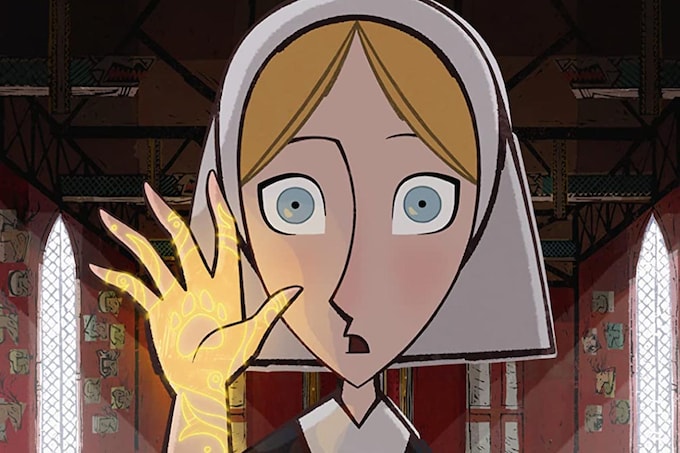