Share
Animation Action Adventure Fantasy Sci-Fi Superhero
3.5 ★ 2021 Season 1 7+
What If...? flips the script on the Marvel Cinematic Universe, reimagining famous events from the films in unexpected ways. Marvel Studiosâ€™ first animated series focuses on different heroes from the MCU, featuring a voice cast that includes a host of stars who reprise their roles.

About What Ifâ¦? Season 1 Web Series

Inspired by the comic book series of the same name and drawing off the decade-long events of the Marvel Cinematic Universe, What If…? season 1 flips pivotal MCU moments on their head to examine what happened in alternative timelines, which aren't clipped anymore following the seismic events of Loki season 1.

The nine-episode What If…? season 1 follows Captain Carter (Hayley Atwell), Star-Lord/ T'Challa (Chadwick Boseman), Doctor Strange (Benedict Cumberbatch), Killmonger (Michael B. Jordan), Thor (Chris Hemsworth) and others unlike what we we've seen them before.

Observing them is The Watcher (Jeffrey Wright) — also narrator — who promises he cannot and will not interfere. But as the multiverse descends into chaos, will The Watcher keep his word or break his vow? 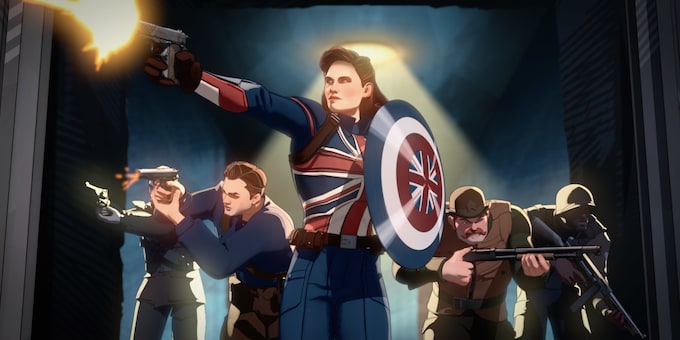 What if Steve Rogers' love interest Peggy Carter took the Super Soldier serum? What if the Wakandan prince T'Challa ended up becoming Star-Lord? What if Nick Fury's big week was even busier and more chaotic? What if all of the Avengers, from Iron man to Spider-Man, were zombies? These are the kind of hypothetical questions asked by Marvel's What Ifâ€¦? â€” premiering Wednesday on Disney+ and Disney+ Hotstar â€” a new animated anthology series with half-hour long episodes that at times feels like the least consequential Marvel Studios project ever. Some of that is because we're being treated to one-off adventures (in many cases), and some owing to the fact that What Ifâ€¦? won't have any effect on the rest of the Marvel Cinematic Universe.