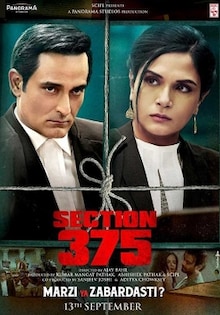 Section 375 is based on a rape-incident were a film director who rapes an assistant costume designer at his home. She decides to not keep mum but instead loges a complaint against the director, accusing him of the rape. The sessions court releases the verdict where the director gets 10 years of imprisonment. This does not settle here, the wife of the director hires a famous lawyer Akshaye Khanna and urges him to fight the case in the high court and save her husband. Richa Chadha plays the role of the public prosecutor and fights from the side of Meera Chopra. The court-room drama goes on and on, and suspense is maintained until the end regarding the verdict of the high court.

The story of Section 375 has its own essence and freshness and the writers are quite new to the industry. The first half of the movie seems quite a little boring as much of technicality is used which does not connect with the audiences much. The second half of the movie keeps you glued to the seats as the intensity of courtroom-drama brings in its twists and turns in the movie. The end of the movie is just unpredictable where it leaves you speechless and leaves you shocked.

The movie has a very bold atmosphere which actually depicts thats what all a rape victim actually goes through during the court-room drama. The dialogues are told very openly which makes the movie plot even more interesting and delight to watch.

Akshaye Khanna is a treat to watch in the movie, Richa Chadha has come up with maturity with this movie and this stability in her performance will bring her in the notice of the film-maker. Rahul Bhat's body language clearly shows that he the rapist who is looking to get the hell out of this rape-case. Meera Chopra is one strong-performer who is rigid with the fact that she needs justice and for which she can stand all sorts of allegations and speak them all very boldly.

If you're someone who is looking forward to a good story and terrific performances, then without any delay, book tickets for Section 375 movie right away.

Khamoshi is a courtroom drama film on the subject of rape that was first premiered at Singapore South Asian International Film Festival 2019. The storyline begins with the arrest of a celebrated filmmaker named Rohan Khuranna (Rahul Bhat) after being accused of raping Anjali Dane, a costume designer. The two are represented in the court by barristers Tarun Saluja (Akshaye Khanna) and Hiral Gandhi (Richa Chadda), who was once Saluja’s trainee but left his after post-ideological differences. While Gandhi tends to get emotionally involved in cases and is driven by the striking urge to ensure justice, Saluja believes that they are “in the business of law, not of justice.” As the courtroom trials proceed, it turns out that Khurana and Dane shared a romantic relationship in the past, and belittles Dane for hiding this fact from the court. While he continues to belittle her with the hurtful accusations, Gandhi keeps fighting passionately to ensure justice for Dane. Given that Khuranna is a popular name in the tinsel town, the court case sparks massive outrage in the country and attracts media attention too. The rest of the story follows the courtroom proceedings and a dramatic quest for the truth. 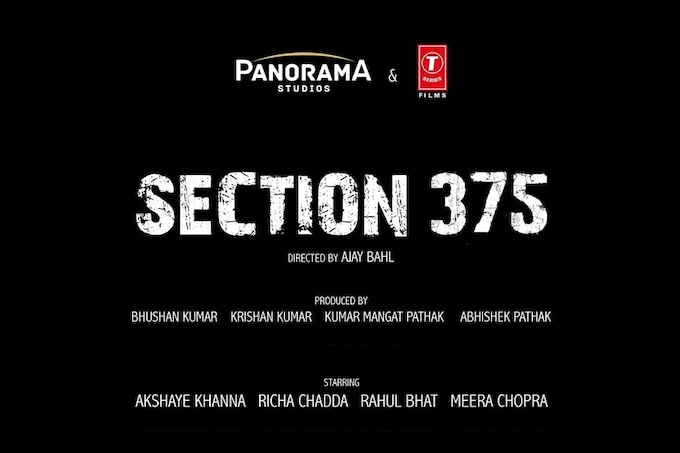