It’s deeply American but rewarding for those willing to engage with it.

The sheer proliferation of superhero culture in this century — more so, the past decade — has pushed filmmakers to venture into hitherto unexpected avenues. That has given us genre crossovers from period war epics (Wonder Woman) to animated spoofs (The Lego Batman Movie), highly self-aware commentary (Deadpool) to counter self-serious dramas (Logan), and fresh visual styles (Spider-Man: Into the Spider-Verse) or aural experiences (Black Panther). More recently, some have toyed with the very boundaries. The Boys semi-successfully touched upon how superpowers and a capitalist world could easily corrupt humans, before Joker delivered a cynical character study, albeit controversially and irresponsibly. Enter HBO's Watchmen.

Based on the 1980s DC comic of the same name created by Alan Moore and Dave Gibbons — Moore's name is missing from the credits, since he doesn't want anything to do with adaptations, while Gibbons is also listed as a consulting producer — the new TV series adaptation comes from Damon Lindelof, previously a co-creator and showrunner on the hit supernatural sci-fi drama Lost, and then the largely-unknown supernatural mystery drama The Leftovers. Lindelof's take on Watchmen is in some ways a sequel and a reimagining of the comic. It still takes place in an alternate reality where Vietnam is an American state, except it's set in present day, one that has pagers instead of the Internet, and where Robert Redford — yes, the actor — has been the US President since 1992.

Since the events of the comic took place 34 years prior in Watchmen's past, only a select few of the eponymous team — Adrian Veidt / Ozymandias (Jeremy Irons), and Laurie Blake / Silk Spectre (Jean Smart) — are still around in 2019. Doctor Manhattan is repeatedly mentioned as living on Mars, but not shown, at least in the first six episodes that critics, including us, had access to. That means there are virtually no superpowers on display in the new HBO series. For what it's worth, Watchmen has plenty of strange happenings on offer, be it alien conspiracies, a Vietnamese trillionaire, or a Veidt stuck in a world with clones. Lindelof has plenty of experience in dealing mysterious twists and turns from his Lost days, and he happily riffs on that to keep audiences wondering and guessing.

But that's just the side dish. The meat and potatoes of the new Watchmen TV show is a deep-seated exploration of racial inequality in the US, with Lindelof — as the creator and primary writer — seemingly interested in delving into its cross-generational effects. Watchmen goes to great lengths to showcase the hate, violence, injustice, and disregard meted out to African-Americans, and how that leads to a corrosion of society itself. The HBO series looks at the different issues across various time periods, from the Tulsa race massacre in 1921 to the modern-day rise of white supremacist groups. In doing so, Watchmen is both timeless and timely, as it touches upon the racial divide that has been exacerbated in the age of Trump, who has emboldened the white supremacist cause.

Set for the most part in the city of Tulsa in the central US state of Oklahoma, the primary focus of Watchmen is Detective Angela Abar / Sister Night (Regina King). Angela adopted her masked alter ego after a white supremacist outfit The Seventh Cavalry — an officer sums them up as “basically the Klan with different masks” — launched a co-ordinated strike on Tulsa's police and family several years ago, in response to reparations handed to victims of racial violence. The event is now known as the “White Night”, for the assailants all wore Rorschach masks, a former Watchmen now alluded to as deceased. While most of Tulsa police now wears yellow masks to protect their identities, some such as Angela have adopted a cover identity and are “retired” in public eyes.

These efforts have helped bring down crime by 80 percent in Tulsa — though with considerable police brutality as a by-product — as local Oklahoma Senator Keane (James Wolk) notes while trying to sell himself and his policies. But a three-year peace is disturbed after a Seventh Cavalry member nearly kills a patrol cop. That brings Laurie Blake (Smart) into the picture, who's left behind her days as Silk Spectre, personal and professional partner to Doctor Manhattan, to become an FBI agent. She now helps catch vigilantes, who are outlawed in Watchmen as they were in the comic. Meanwhile, the only other former member, Adrian Veidt (Irons), seems to be occupying his own separates series — though he makes one intriguing appearance elsewhere — as he lives in a castle somewhere all by himself. He's been declared dead officially, though rumours persist.

Future Watchmen episodes expand the series' depth to look at the crime-fighting history of Angela's family, and her fellow costumed detectives in the Tulsa police force, which include the likes of Wade Tillman / Looking Glass (Tim Blake Nelson), who wears a reflective silver mask on his mask, and Red Scare (Andrew Howard), a self-described communist dressed in all-red attire. Further vignettes help shed a light on the Vietnamese trillionaire Lady Trieu's (Hong Chau) connection to the plot, who is using her massive fortune to build a new wonder of the world near Tulsa. Watchmen has a lot of exposition to wade through, and though most of it is handled, acted, or presented well — the sixth episode is especially well done — it's inelegantly delivered at times. 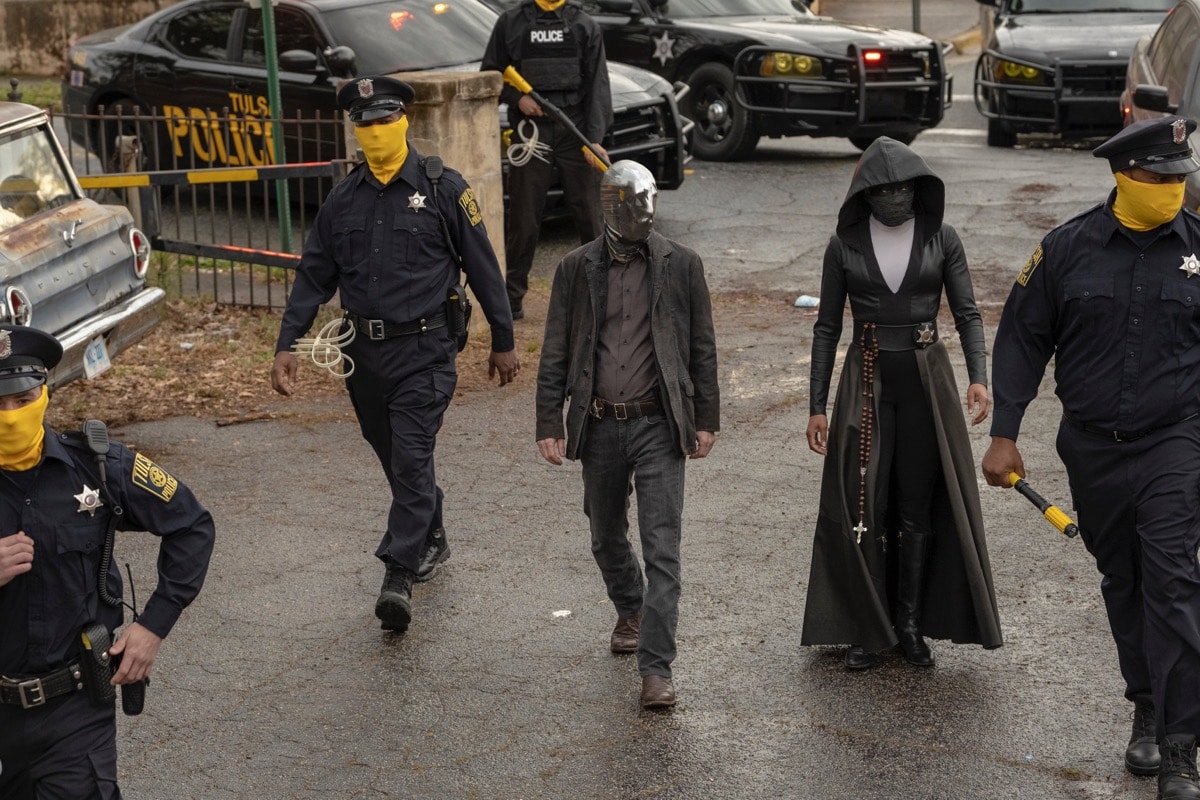 In fact, the HBO series' production is top-notch in every regard, as you'd expect. Complementing that visual treatment is the work of Oscar- and Grammy-winning composers Trent Reznor and Atticus Ross, with their music delivering that same uneasy eeriness similar to Twin Peaks at times. The soundtrack is otherwise eclectic, comprised of songs across genres and time as Watchmen's story travels through decades of the previous century.

Lindelof's desire to look at contemporary American issues does mean that Watchmen is largely self-serious, but it does make room for sprinkles of humour, most of which stems from jabs aimed back at the superhero culture the HBO series emanated from. A Batman lookalike is made to look foolish in one episode. Some of it is a variation on stuff from the comics: an FBI agent ridicules a “historically inaccurate” in-world TV series based on Minutemen, a superhero team from the 1940s that was also part of the comic. By baking that into a modern-day show within a show — it's called “American Hero Story”, modelled on the similarly-titled anthology series — Watchmen tries to get at how nostalgia and superheroes have taken over pop culture. The unacknowledged joke is that it too is part of it.

Except that's a clever bit of garnishing. It's clear that Lindelof is using the superhero aspects of Watchmen as bait to draw viewers in, hoping to then engage them with a rich, heavy drama that is at its core. That core is very American though and hence might not strike a chord with portions of the international audience. Lindelof is likely betting he can pique their interest and get them to hang around by sprinkling mysterious elements influenced by his time as a veteran writer on Lost. Watchmen is obviously not a show for most fans of the superhero genre (or Lost fans, for that matter), but those willing to keep an open mind will find a relevant socio-political series that has a lot to say about us.

At the same time, Watchmen pushes the envelope of the superhero genre, in better, more successful ways than what has been claimed of other adaptations this year.

Watchmen premieres October 21 on Hotstar, and November 24 on Star World in India.

Further reading: Watchmen, HBO, Damon Lindelof, DC Comics, Warner Bros
Akhil Arora Email Akhil
Akhil Arora covers entertainment for Gadgets 360, interviewing stars such as Christian Bale and Anurag Kashyap, covering series premieres, product and service launches across the globe, and looking at American blockbusters and Indian dramas from a global socio-political and feminist perspective. As a Rotten Tomatoes-certified film critic, Akhil has reviewed over 150 movies and TV shows in over half a decade at Gadgets 360. When he is not completely caught up with new film and TV releases, Akhil ...More
Google Pixel 4 Price, Fabric Cases, Nest Mini, and Pixelbook Go Leaked Ahead of Launch
New Data Protection Bill to Be Placed in Parliament Soon: Prasad

product In our review of Watchmen — the 2019 HBO TV series based on the DC comic — we look at how creator Damon Lindelof incorporates American socio-politics such as racial inequality, white supremacy, and police brutality to push the envelope of the superhero genre.