Spoilers ahead for WandaVision episode 7. 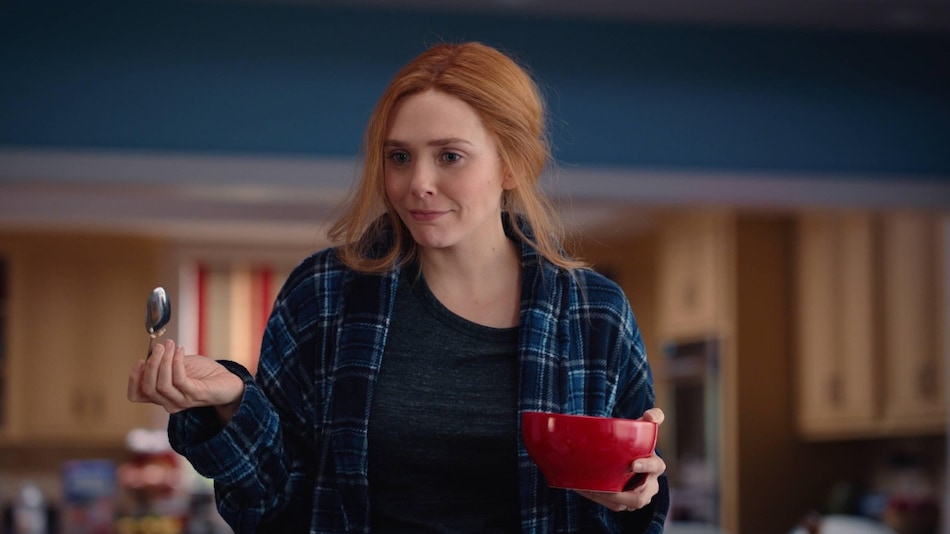 WandaVision episode 7 — out February 19 on Disney+ and Disney+ Hotstar — just gave us the Marvel Cinematic Universe series' villain: Agatha Harkness (Kathryn Hahn). If like me, you were wondering what an actress of Hahn's calibre was doing playing a recurring character of nosy neighbour Agnes, WandaVision episode 7 put that to rest. Agnes has been Agatha in disguise all along, and it's she who has been pulling strings across WandaVision's run, including the appearance of Pietro Maximoff (Evan Peters). It now makes sense why Agnes had started to behave differently from WandaVision episode 5 onwards, not even bothering to react to Wanda Maximoff (Elizabeth Olsen) using her powers in front of her. Wanda didn't catch on in time though, and now she's going to pay the price.

The pivotal climactic moments of WandaVision episode 7 — titled “Breaking the Fourth Wall,” directed by Matt Shakman, and written by Cameron Squires — set up the MCU series' endgame that is now in its home stretch with just two episodes to go. WandaVision episode 8 arrives next Friday, February 26, with WandaVision's series finale, episode 9, set for the following Friday, March 5.

WandaVision episode 7 opens the morning after the events of WandaVision episode 6, where Wanda had expanded the boundaries of Westview after her (dead) husband Vision (Paul Bettany) attempted to leave the Hex to get help for the people stuck within. Wanda is clearly feeling the aftereffects of her actions, and she's decided to force herself to spend a “quarantine-style staycation” day with herself. “That will show me,” she says, literally breaking the fourth wall, in what is an episode inspired by modern day mockumentary-style sitcoms such as Modern Family. Wanda is ignoring her kids as well, who are left wondering what's going on with their mother, all while the world keeps shifting around them. Wanda's world is now experiencing glitches, with objects changing shape or form.

Even Wanda doesn't know why it's happening, leading her to remark sardonically: “Probably just a case of the Mondays, am I right?” Olsen has been really good in showcasing her range on the MCU series, and WandaVision episode 7 is further proof of her comedic timing, which she has now wonderfully deployed for nearly every sitcom generation that has ever existed.

Outside the Hex, S.W.O.R.D.'s acting director Tyler Hayward (Josh Stamberg) is getting ready to launch something, though WandaVision episode 7 never gets back to him for the rest of the episode. This is clearly a table-setting move for the remaining episodes.

Elsewhere in WandaVision episode 7, a groggy Vision wakes up on the same field where he tried to exit the Hex. He comes across Dr. Darcy Lewis (Kat Dennings), who is now an escape artist and doesn't remember any of her previous self now that she's been pulled into Wanda's world.

Back at the Vision residence, Wanda is going through an existential crisis. The twins wonder why their dad hasn't come back home, and what happened to “Uncle P” — that's Pietro. Wanda forcefully says that Uncle P is not their uncle and to not believe a word of what he says. Then who is he really, the boys wonder. Wanda admits that though she's supposed to have all the answers as their mother, she in fact has zero answers. She then goes off on a tangent about the meaninglessness of everything that leaves her kids very confused, naturally. Thankfully, Agnes — who has yet to reveal her true self — walks in to take the kids away. “I don't bite,” she says, and then reveals to the camera that she bit a kid once. If you've been following the breadcrumbs, including her glance to the camera, this is more or less foreshadowing.

Outside the Hex, FBI Agent Jimmy Woo (Randall Park) starts to dig into the files that Darcy pulled from behind Hayward's firewall, and discovers that Hayward was trying to bring Vision back online. That's in defiance to Vision's will, that was exactly what Hayward had accused Wanda of doing back in WandaVision episode 5. But Hayward's team at S.W.O.R.D. failed to actually do it, until Wanda stole his body and brought him back to life. It's why Hayward has been tracking Vision within the Hex, as we were told in WandaVision episode 6, because he just wants his sentient weapon back. Woo and Captain Monica Rambeau (Teyonah Parris), whom he's been travelling with, then meet up with her late mother Maria Rambeau's friends in the US Air Force, who've decided to help Monica out: with a space rover.

Back at the circus, Vision pulls the real Darcy out by doing that forehead thing with his fingers. Darcy admits she wanted a guest spot on WandaVision but that did not feel good. The two then make their way out of the circus.

Meanwhile at Agnes, Billy (Julian Hilliard) says he likes it at Agnes' because she is “quiet on the inside.” In hindsight, the fact that the telepathic Billy can't read Agnes reveals that she's using her magical abilities to shut him out on WandaVision episode 7.

Back to Woo and Monica, where the latter has been put in a space suit. As Monica gets into the rover, Woo speaks to the operation leader Major Goodner (Rachael Thompson) who says she has full confidence that Monica will “sail right through unharmed.” Her extreme level of confidence tells me that the opposite is going to happen—and it does. The rover fails to push through the strengthened walls of the Hex and starts to change its form. Monica gets out just in time to save herself, right before the rover is launched back by the energy-field wall into the air. But Monica hasn't given up, as Woo realises but his protests are in vain as she charges in blindly into the Hex—in direct opposition to Darcy's warnings (shown as part of the WandaVision episode 7 recap as a reminder) that the Hex has already twice changed Monica, on a molecular level.

WandaVision episode 7 takes us inside the walls of the Hex for the first time, as it reveals what Monica has to push through to get to the other side. Her body splits into multiple versions of herself over the years, and we can hear the voices of those closest to her: her mother (Lashana Lynch), Nick Fury (Sameul L. Jackson), and Carol Danvers / Captain Marvel (Brie Larson). WandaVision episode 7 then reveals that Monica now has powers of her own (is this the Hex's doing?), as her eyes glow bright blue just as she pushes herself into Westview.

Elsewhere, the slow roll of Vision and Darcy back to the Vision residence continues. Looking back, this almost feels deliberate, like WandaVision episode 7 is trying to keep Vision from seeing Wanda before she's trapped by Agnes. Otherwise, he would upset that equation with his powers. I mean, why are they driving? Can't Vision just pick up Darcy and fly off? Anyhoo, on their drive back, Vision is caught up on his entire history by Darcy. He now knows his story. Darcy wonders why Vision can't exist outside the Hex — and though she's questioning whether his existence is real, she notes that the love between Wanda and him is hundred percent real.

Monica intrudes into Wanda's house, which isn't the best strategy given how she was thrown out the last time around. She tries to tell Wanda about Hayward's nefarious interest in Vision, but Wanda isn't having it. Expectedly, Wanda lifts her in the air and threatens to destroy her, but Monica uses her own powers to land back on the ground (in standard superhero style) that gives Wanda pause. Monica then says she has her own trauma like Wanda — she lost her mother, as you'll recall from WandaVision episode 4. “The worst thing I can think of has already happened to me,” Monica adds. But she can't change it or reverse her death, unlike Wanda, and she must accept it as that's her truth. Monica pleads with Wanda to bring down the Hex, but they are interrupted by Agnes.

WandaVision Episode 4 Recap: It's All Wanda

Agnes consoles the emotionally charged Wanda and takes her to her home. There, Wanda starts to notice that things are off. And weirdly, Tommy and Billy are nowhere to be seen. She wonders where they are, and Agnes says the twins are playing in the basement. You know something is going to go horribly wrong as Wanda opens the door to the basement. As she climbs down, Wanda notices a shadowy passageway with tree branches growing out of it. You know it's a bad idea to walk in, but Wanda does nonetheless and ends up in a room with more tree branches circling old worn-down walls. And just as she spots a book that is seemingly held together by magic, Agnes walks in to announce that she has magical powers too.

She reveals that her name is Agatha Harkness and then seemingly takes over Wanda's mind, before WandaVision episode 7 launches into a quick montage of all the moments across episodes that she has manipulated. It's not WandaVision created by Wanda Maximoff, as the opening credits have said numerous times — this is “Agatha All Along”, starring Agatha Harkness. WandaVision episode 4 said it was all Wanda, but Agatha wants you to know it's been her all along. The way the reveal is designed is clearly directed towards the audience, and not Wanda. And it makes sense that WandaVision episode 7 is titled “Breaking the Fourth Wall.”

Who is Agatha Harkness and why is she so interested in tormenting Wanda? Tune in next week. WandaVision episode 7 doesn't end there technically, as it's the first episode with a scene during the credits. In it, Monica arrives at Agnes' house and looks for signs that someone is inside or not. Ultimately, she opens the external door that connects to the basement, and discovers the timbers and the purple floating energy, that we have already been shown are connected to Agatha Harkness. Just then, Pietro — who's been missing for all of WandaVision episode 7 — shows up out of the blue, causing Monica to be surprised, and says: “Snooper's gonna snoop.”

WandaVision episode 7 is now streaming on Disney+ and Disney+ Hotstar. New episodes release every Friday around 1:30pm IST / 12am PT.