Spoilers ahead for WandaVision episode 4. 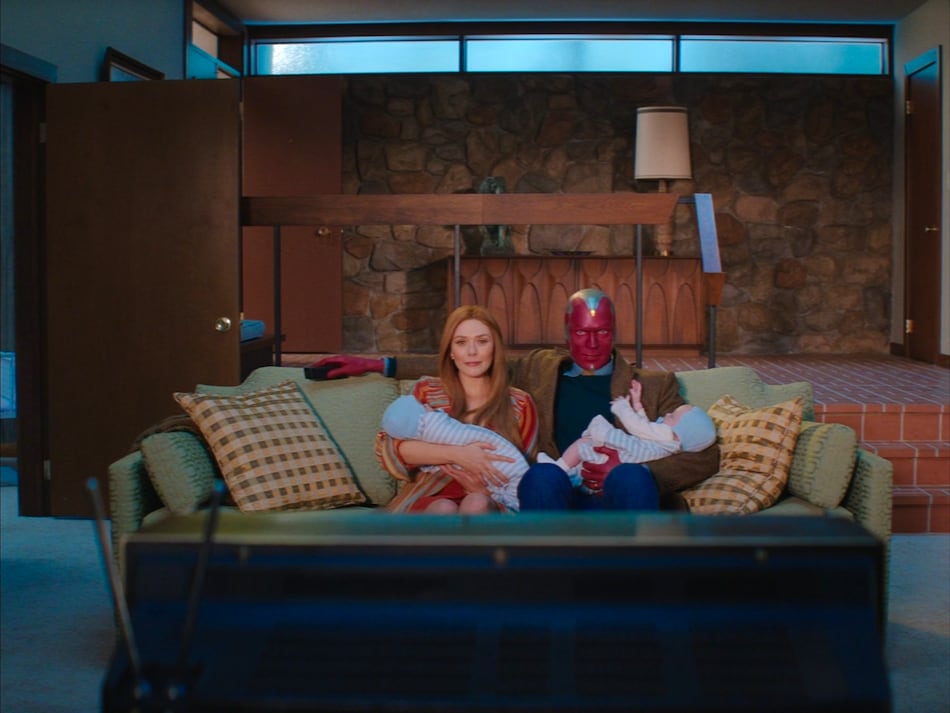 WandaVision episode 4 — out January 29 on Disney+ and Disney+ Hotstar — finally takes us behind the curtain. After spending three episodes inside the American classic sitcom world (set in the ‘50s, ‘60s, and ‘70s), Marvel has decided we've had enough — and that some answers are needed. The show's title characters — Wanda Maximoff (Elizabeth Olsen) and Vision (Paul Bettany) — are barely present in the new episode, as MCU's first Disney+ series completely changes perspective to retell the story from the point of view of the (literal) outsiders. Along the way, it also answers a central question to the heart of the series: is Vision dead or alive? If you've been following the clues, WandaVision episode 4 can be a bit predictable.

The new 28-minute WandaVision episode — titled “We Interrupt This Program”, directed by Matt Shakman, and written by Bobak Esfarjani and Megan McDonnell — opens in the immediate moments after Hulk reversed Thanos' snap. It not only confirms that WandaVision is set in the aftermath of Avengers: Endgame, but reveals that Monica Rambeau (Teyonah Parris) — the grown-up version of the 11-year-old girl we saw in Captain Marvel, who chose the signature red-and-blue colours of Captain Marvel's costume — had disappeared in the Blip too (along with billions of others). Naturally, she's disoriented as she comes back, and is hit with a much bigger blow after she discovers that her mother, the pilot Maria Rambeau (Captain Marvel's best friend), died of cancer while Monica was gone.

Three weeks later, Captain Monica Rambeau returns to work at S.W.O.R.D. — WandaVision episode 4 confirms its modified full form as Sentient Weapon Observation and Response Department — where we're told that her mother Maria was one of the founding members. In the comics, S.W.O.R.D. is essentially like S.H.I.E.L.D. but for space, and WandaVision episode 4 more or less reiterates that description. Monica is eager to get back to work, more so in a post-Endgame world where S.W.O.R.D. is even more vital given the recognition of extra-terrestrial threats across space and time. Unfortunately, her boss, S.W.O.R.D. acting director Tyler Hayward (Josh Stamberg) is grounding her, due to Maria's policies surrounding the return of those who were caught in Thanos' snap.

Instead, Monica is tasked with an on-ground mission that involves chaperoning a drone to Westview, New Jersey. Finally, a connection to the events of the first three WandaVision episodes. The mystery deepens as local New Jersey police officers believe the town of Westview doesn't exist. Monica meets FBI agent Jimmy Woo (Randall Park) — remember him from Ant-Man and the Wasp? — at the scene, who notes that this isn't a case of missing persons, as Monica's boss had told her, but rather one of a missing town. Monica pulls up the drone from her car and flies it toward Westview, only to see it disappear into thin air. She walks towards town and detects an energy field, and despite Woo's protestations to be cautious, she puts her hand in and is sucked in.

Twenty-four hours later, S.W.O.R.D. calls in on scientific experts (in addition to the military armada that it has assembled outside the town of Westview, New Jersey). Said group includes one Dr. Darcy Lewis (Kat Dennings), another MCU returning character, previously seen in Thor and Thor: The Dark World as Jane Foster's (Natalie Portman) assistant. Darcy detects that Westview is filled with massive amounts of CMBR — cosmic microwave background radiation, i.e. relic radiation left over from the early days of the universe's creation — and then later asks for an old TV, having figured out that there's a broadcast wave hidden inside the radiation.

Meanwhile, S.W.O.R.D. is sending in an Agent Franklin (Zac Henry) into the sewers to infiltrate Westview — who you'll recall was seen towards the end of WandaVision episode 2, emerging from a manhole — and help rescue Monica.

Later, when Hayward demands answers from his team, Darcy reveals the TV show she's been watching — which naturally catches everyone off guard. Agent Woo sums it up: “So you're saying the universe created a sitcom starring two Avengers?” That's a nice shot at yourself you're allowing there, Marvel.

Darcy then tries to communicate with Wanda, which leads to another moment from WandaVision episode 2: the voice on the radio that said “Who's doing this to you, Wanda?” That was Agent Woo's voice after all, as some fans had guessed. For Darcy, it's the first sign that the broadcast can be disrupted by the outside reality — but it also presents an additional challenge after Wanda skips over the signal and resets her reality, like we've seen her do in the first three WandaVision episodes. Darcy also learns that Monica has been made a part of the TV broadcast, though she doesn't seem to be acting like herself.

Fast forward to the events of WandaVision episode 3 — the pregnancy and the delivery of the twins, aided by “Geraldine” who's actually Monica — which we now observe from the point of view of Darcy and Agent Woo. The shift to all colour and the ‘70s prompts Darcy to remark: “50s, 60s, and now 70s. Why does it keep switching time periods? It can't be purely for my enjoyment, can it?” It's another clever comment from WandaVision episode 4's writing duo, which also works as meta commentary on what's going on. After all, Disney and Marvel Studios created WandaVision as a sitcom (for the first three episodes, and possibly more) for our enjoyment.

WandaVision episode 4 has been entirely unlike anything we've gotten so far, much more like the normal Marvel mysteries and intrigue we're offered. The only sitcom-y bits here are the recurring joke involving Darcy and coffee — and her seemingly inability to find someone to help her with a caffeine boost. There's no time for a fake commercial either. WandaVision episode 4 is a lot more on the dramatic and serious side, from the sombre opening moments (Monica losing her mom while she was away, another sign of how Thanos' snap must have deeply affected countless lives) to Wanda's fury and anger towards the end (as she realises that “Geraldine” is an outsider and flings her through furniture and walls to the world outside).

And of course, the big one: the confirmation that Vision is truly dead. WandaVision episode 4 shows Vision from Wanda's eyes for the briefest moment, which show him just as he looked after Thanos pulled the Mind Stone out of his skull in Avengers: Infinity War. It's a ghastly moment — Wanda can't bear to look at him either — and a blow to any hopes and teases of Vision's return that WandaVision had hinted at previously. Wanda is just making it look like he's alive, just as she's built this zany sitcom world where real-world people are playing characters, not out of their own volition. Or as Monica says, as she regains her senses after being thrown out: “It's all Wanda.”

WandaVision episode 4 is now streaming on Disney+` and Disney+ Hotstar`. New episodes release every Friday around 1:30pm IST / 12am PT.