Toy Story 4 Review: A Terrific Blend of Emotion and Action

If this is the final entry, it knows how to go out.

Forky and Woody in Toy Story 4

Why is there a Toy Story 4? The first three films of Pixar's best animated series felt like they had told a complete story, of Woody (Tom Hanks) & Co. being a part of their human owner Andy's complete childhood, before he gave them away to little Bonnie as he left for college. Set aside the narrative, what could Toy Story 4 bring to the franchise that the earlier, excellent sequels hadn't? Thankfully, Pixar has the answer. With a new bunch of toys (and a returning favourite) posing big, new questions to the good ol' ones, and a screenplay — from franchise veteran Andrew Stanton, and Stephany Folsom — delivering laughs and adventure in equal amounts, Toy Story 4 ends up being a great entry, one that's self-assured and the most inventive Pixar sequel yet.

There are scenes in Toy Story 4 that are straight out of a horror movie (in a kid-friendly manner, of course), some that channel a heist thriller, and yet others that feel reminiscent of neo-noir. There's even a scene that takes place in a Toy Story-version of a nightclub. The director Josh Cooley — best known for co-writing the 2015 Pixar film Inside Out, and directing the follow-up short Riley's First Date? — somehow weaves all that together with the series' colourful, brightly-lit yarn. Toy Story 4 shows (yet again) the folks at Pixar aren't just great animators, which implies their visual creativity, ingenuity and execution of animated content, but also ardent film lovers who use their knowledge of the art form and every tool in the book to imbue scenes with a style that elevates it over standard fare.

And as with most other Pixar movies, Toy Story 4 also knows how and when to integrate life lessons that speak to our deepest, basic desires. Earlier Toy Story films have shown a knack for probing human nature, and the fourth chapter of the series delves further in, landing on the topic of sentience. Toy Story 4 expounds on that through the interaction of old and new anthropomorphic characters, and like its direct predecessor — 2010's Toy Story 3 — it arrives at a series of conclusions that will speak a warm, fuzzy feeling inside you and put a lump in your throat. The moments are earned, and there's a sincerity to that effort which shines through the film. Better yet, Toy Story 4 ticks those boxes while playing at a frantic pace that makes its 100-minute runtime feel breezy.

Toy Story 4 opens with a short prequel that clues us in on how Bo Peep (Annie Potts) came to be separated from the toy gang, between the events of Toy Story 2 and Toy Story 3. It's got great significance for the rest of the film, as you can expect. We then jump to present day, where we learn that Woody isn't Bonnie's favourite anymore, as he's left behind in the closet while the other toys are played with. But the ever-pleasing Woody won't let that dissuade him. He goes the extra mile to help Bonnie, who's terrified of going to kindergarten. His efforts cause the little girl to make a new friend on her first day at school. As in, literally make a new friend in Forky (Tony Hale, from Veep), a white plastic spork with googly eyes, red pipe cleaner arms, and a popsicle stick broken in half for feet.

Owing to Toy Story logic, a simple craft project like Forky is brought alive. Naturally, he's terrified. Having been birthed from components found in the dustbin, Forky thinks he's trash and wants to return to where he came from, despite Woody's vehement protests. This works as both a literal and figurative joke on Toy Story 4. A montage of funny scenes — at home and on a road trip Bonnie's family takes — shows Forky making a beeline for the nearest bin while Woody does his best to stop him. It also conveys Forky's existential crisis, as he's unable to comprehend why he's suddenly alive — “I don't belong here!” he shouts once — and the purpose he serves for his human maker. Forky ultimately jumps ship, forcing Woody to go after him.

Through Forky, Toy Story 4 can touch upon the more important existential worry: Woody's. Forky may not desire it himself, but the love Bonnie has for her newest toy is what Woody has been craving. He had it with Andy, but he hasn't been loved as much by his new owner. Essentially, it's what Woody lives for, since the purpose of a toy's life is defined by how they are enamoured by their human. But is it the only purpose? That question is asked by the return of Bo Peep, a “lost toy” now on her own after she was donated to an antique shop and spent years collecting dust. Her presence isn't simply for nostalgic effect — she was last seen properly in 1999's Toy Story 2 — as she's crucial to the themes of Toy Story 4, offering a much different take on the toy life than Woody. 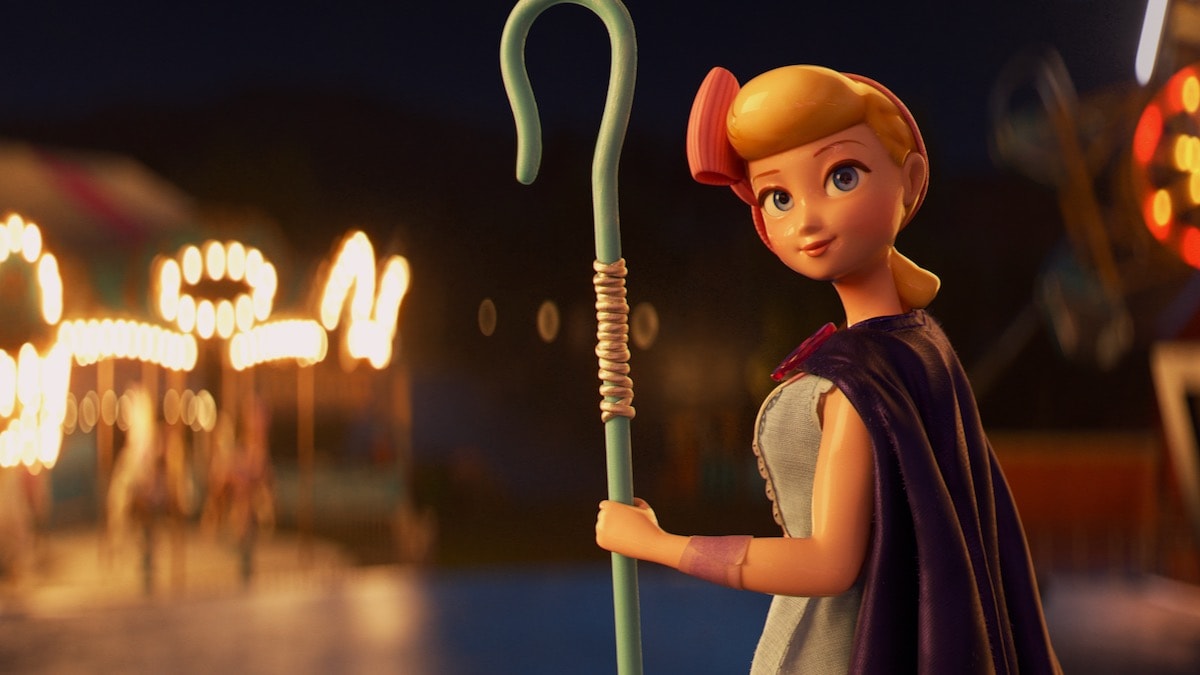 Woody and Forky come across Bo Peep on their way back to Bonnie, kicking off a new thread that occupies much of the film, involving a pullstring doll named Gabby Gabby (Christina Hendricks, from Mad Men) and a nearby carnival. With the help of all those elements, Toy Story 4 introduces a hilarious and thoroughly entertaining bunch of new toys: two plush toys Ducky (Keegan-Michael Key) and Bunny (Jordan Peele), as the Key & Peele duo inject the film with an unheralded sense of looney that the other toys don't possess; Bo's friend Duke Caboom (Keanu Reeves, from The Matrix), a self-proclaimed “Canada's greatest stuntman”; and Bo's miniature cop companion Giggles McDimples (Ally Maki, from Wrecked), whose introduction is one of the most charming moments of Toy Story 4.

With Woody and Bo off on a new adventure that involves the aforementioned new ones, it does mean that Toy Story 4 largely ends up side-lining much of the main returning cast in the process, as there really isn't much of a space for them in the plot. Buzz Lightyear (Tim Allen) is the only one who gets a look in, as he serves as a gateway for Ducky and Bunny into the story. But really, Toy Story 4 is Woody and Bo's story. Her past connection to the sheriff protagonist, and her evolution since as a character allows the film to deliver its message in near-perfect fashion. (She is a delight to have around.) In doing so, Toy Story 4 imparts a lesson on how to say goodbye to the ones we love, which — inadvertently or possibly, intentionally — mirrors the franchise's own run.

Hanks has said this is the final entry in the series, but others have been coy. What do we know is that two spin-offs, centred on Forky and Bo Peep, are on their way to the streaming service Disney+ over the next year or so. And considering the 11 years between Toy Story 2 and Toy Story 3, and the nine years between the latter and Toy Story 4, who can say what the future holds. For now, thanks to a highly-engaging ride that bursts with full-of-heart performances, asks essential questions, and treats us to exciting entrants and action sequences, Toy Story 4 more than justifies its presence. As part of a 25-year-old series, it's also clever enough to pack in an emotional wallop that works for every kind of audience member. And crucially, just like its toys, the series is showing no signs of aging.

Toy Story 4 is out now in cinemas across India. There are several scenes during the credits, and a tiny gag at the very end.

Further reading: Toy Story, Toy Story 4, Disney, Pixar
Akhil Arora Email Akhil Akhil Arora covers entertainment for Gadgets 360, interviewing stars such as Christian Bale and Anurag Kashyap, covering series premieres, product and service launches across the globe, and looking at American blockbusters and Indian dramas from a global socio-political and feminist perspective. As a Rotten Tomatoes-certified film critic, Akhil has reviewed over 150 movies and TV shows in over half a decade at Gadgets 360. When he is not completely caught up with new film and TV releases, Akhil ...More
Apple Recalls Some MacBook Pro Units Over Fire Safety Risk
Harry Potter: Wizards Unite Game From Pokemon Go Creators Now Available for Download in Select Regions

product Woody, Buzz Lightyear, and the rest of the toy gang are back in Toy Story 4, as they set off on a road trip with new toy Forky. On the way, Woody reunites with Bo Peep, who teaches him that there’s more to a toy’s life than loving your human.