Tomb Raider: Alicia Vikander Auditions to Be the Next Tom Cruise

Though the film's title says so, its protagonist Lara Croft – a young English woman (Alicia Vikander) who's avoiding her sizeable inheritance after the disappearance of her archaeologist father Lord Richard (Dominic West) – has no inclination towards raiding tombs. In fact, she has no knowledge of her father's interest in archaeology at all, who she believes spent all his time in 'boardrooms and business meetings' before he went missing seven years ago in Tokyo. Lara is barely making a living for herself as a bike courier for a food delivery service in London, and trying to earn some money on the side to afford her mixed martial arts lessons.

Lara doesn't want to accept her father is really gone, but when she reluctantly turns up to claim her inheritance, she comes in possession of a key that leads her into a secret office of her father's. It's there she learns of Richard's interest in some ancient Japanese history that speaks of "power over life and death", and still holding out hope to see him, Lara ignores his advice to burn all of his research and sets off for an uninhabitable and lost island of Yamatai, with a captain named Lu Ren (Daniel Wu), whose role starts off promising but then unfortunately gets side-lined.

This isn't a seasoned Lara like in certain iterations of Tomb Raider, the game. The film serves as her origin story, having been inspired by the 2013 best-selling reboot of the same name. But those influences merely stop at the premise, setting and Lara's look. Fans who were put off by the gun-heavy nature of the reboot will be happy to know there's none of that here. Rather, Vikander's Lara finds her way into her recognisable weapons: the bow-and-arrow and the climbing axe, a facet that will be interesting to see for video game fans, and overlooked by everyone else.

In a departure from how Tomb Raider the game pans out, the film – directed by Roar Uthaug (The Wave), and based on a story by Evan Daugherty (Snow White and the Huntsman) and Geneva Robertson-Dworet – puts a twist on the plot and the mythical villain of the story, which will surprise those who remember the game, eschewing the more supernatural bits of the reboot for something more grounded. It's also why the movie version of Lara is more sceptical of her father's interest and devotion; at one point, she wonders aloud if he actually went mad.

But those changes don't improve Tomb Raider in any meaningful way. The problem with most adaptations of video games is two-fold: keeping a check on the exposition, and designing action set-pieces that are interesting to watch. Uthaug mostly fails on both counts. The stuff about ancient Japanese history is so rote and beyond clichéd that you'll tune out during the first sentence, though the film keeps adding to it as it goes. And there is no inventiveness in action scenes, despite the film feeling like it was designed around them.

Borrowing elements from the video games, Tomb Raider divides the island of Yamatai – where most of the film takes place – into different levels: there's an escape sequence with gun-toting men on Lara's back, a survival level involving a rusted, old aircraft on the edge of a waterfall, a one-on-one melee fight in the dark, a stealth infiltration mission, and then a puzzle-solving exercise inside a tomb towards the end. Some of these would be fun to play, but they rarely make for enjoyable viewing. 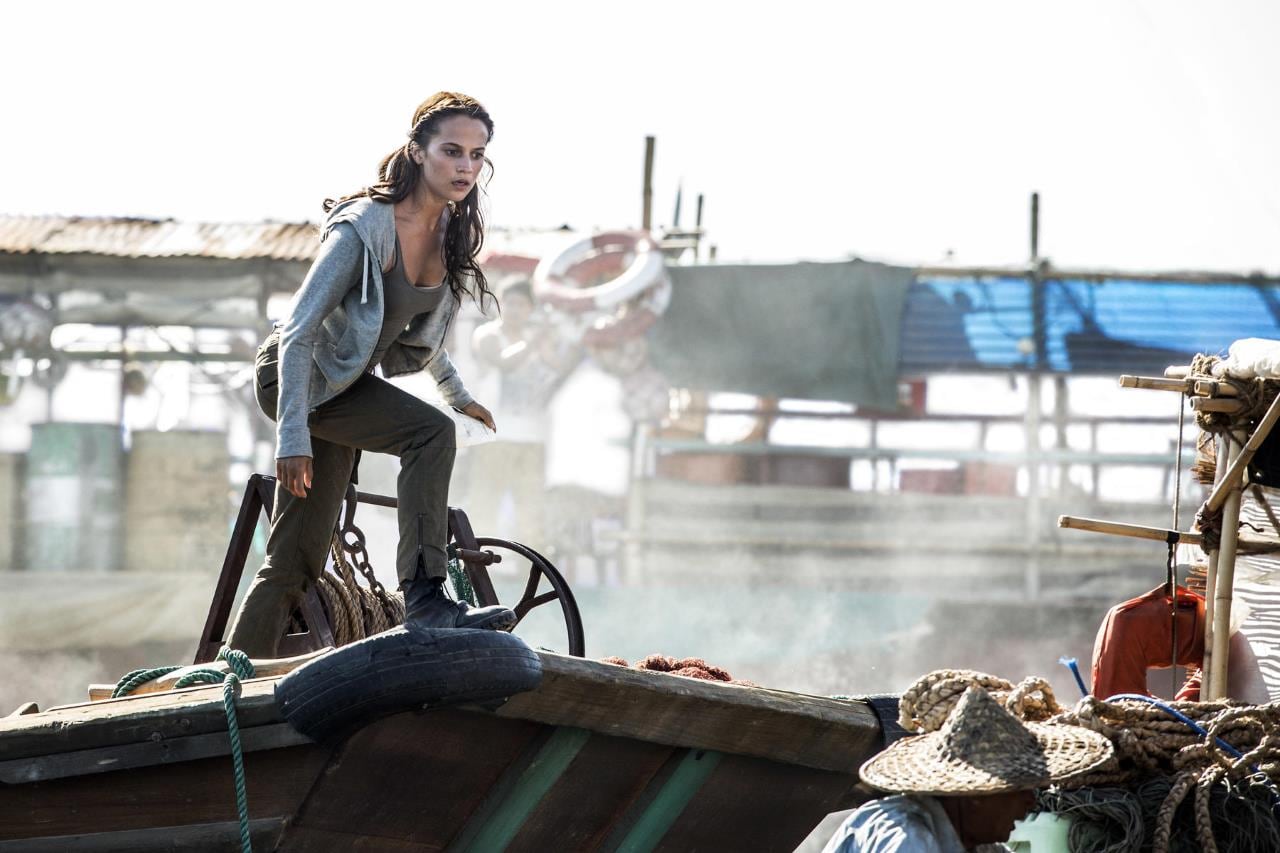 In fact it's the simpler stuff that's more fun. Tomb Raider keeps looking for an excuse to put Vikander on the run, even before she arrives in Yamatai. It starts with a bike chase in London, and then morphs into just flat-out running on her own two feet from there on, be it some thieving locals on the Hong Kong docks, or running for her life on the island. It's almost Vikander is being auditioned to be the next Tom Cruise, who's famous for running in cinematic fashion. Though these scenes show promise, they aren't memorable enough, like Cruise's work in Mission: Impossible, or Daniel Craig in Casino Royale.

Tomb Raider is much worse when it comes to character work. The film doesn't know how to build the father-daughter relationship between Richard and Lara, and the scenes shared between the two, which involve West and two younger versions of Lara – Maisy De Freitas as 7-year-old, and Emily Carey as her 14-year-old self – are so perfunctory that they establish nothing more than 'dad loves daughter'. The relationship adds barely anything of note to Lara's character, and merely serve as a story mechanic to get her to the island.

The only reason Tomb Raider is watchable is down to Vikander's acting chops – being the lead protagonist, she occupies the screen for the most part during the 118 minutes – who brings such resolve to an under-written role that she's relatable from the get-go. Being a grim adaptation of a grim video game reboot, the film is filled with moments that further desensitise violence in a desensitised world, but Vikander's reactions after her first kill – one that requires her to use her bare hands – are still moving, which only serves as a testament of her skills.

Under better leadership, Vikander's talents – playing a more modern Lara Croft than Angelina Jolie's hyper-sexualised version – could have been put to much better use. And they might very well be, given there have been murmurs of Square Enix – the studio that owns the rights to Tomb Raider – hoping to kick off a franchise with the Oscar-winning actress at its centre, one that might involve some of its other video game properties too, including Hitman and Deus Ex. This inauspicious start suggests otherwise for now, but even the Asgardian god of thunder needed three tries.

Tomb Raider released Friday in India, a week before its global rollout. There are no post-credits scenes.

Further reading: Tomb Raider, Lara Croft, Alicia Vikander, Warner Bros
Akhil Arora Email Akhil
Akhil Arora covers entertainment for Gadgets 360, interviewing stars such as Christian Bale and Anurag Kashyap, covering series premieres, product and service launches across the globe, and looking at American blockbusters and Indian dramas from a global socio-political and feminist perspective. As a Rotten Tomatoes-certified film critic, Akhil has reviewed over 150 movies and TV shows in over half a decade at Gadgets 360. When he is not completely caught up with new film and TV releases, Akhil ...More
Mi TV 4A vs Mi TV 4: Here Are the Differences Between the Two Xiaomi TVs
Samsung's 2018 QLED TVs to Launch in India by May-End

product Out now in India, the new Lara Croft reboot starring Alicia Vikander in the lead, is based on the 2013 reboot of the popular video game franchise Tomb Raider.

Tomb Raider: Alicia Vikander Auditions to Be the Next Tom Cruise
Comment