The Predator Is Terrible at Being Funny, Funny When It's Terrible

A Predator in um... The Predator

Thirty-one years after Shane Black (Iron Man 3) played a supporting role in the Arnold Schwarzenegger-led Predator, he’s taken over the reins of the sci-fi action horror series as co-writer and director of the latest instalment, The Predator, out this week. Black is an interesting choice for a franchise that has never wavered from its original self-serious, machismo tone, given he is known for stuffing in black comedy, throwaway gags, and moments of awkwardness into his action films. (Case in point: Kiss Kiss Bang Bang, and Lethal Weapon.) And he attempts to graft on those qualities onto The Predator, which now trades in witty one-liners alongside endless violence, while trying to upend genre conventions of ‘80s Hollywood action movies, in what comes across as a wish to become a Predator parody at times.

On the surface, Black’s approach to The Predator had a few good ideas. Action films that take themselves too seriously can use a bit of light-heartedness, provided you commit to it in the right fashion: support it with well-rounded, believable characters and an interesting plot, paired with action set-pieces that innovate on what has come before. In short, execute it properly. But the film blows it in every aspect, so much so that Black might want to revisit the 10 rules he laid out for good action movies in 2009. And this is after the studio Fox had the entire third act reshot in July this year on the back of poor test screenings. The Predator simply isn’t worth your time or monetary investment, though it’d make a great pick for the folks over at Mystery Science Theater 3000.

There are several reasons why none of it works as intended. For one, The Predator is in a rush from start to finish, leaving no time for a moment to be appreciated before it’s piled on three more. Making things worse, the script is a convoluted mess that throws too many ideas into the blender and doesn't know what it wants to be. And at times, the film doesn’t gel moment to moment, almost as if someone forgot to shoot the connective tissue in between. All of that comes together to deliver a frequently-nonsensical chapter which indulges in the action-movie tropes it wants to mock – there's also a frustrating overuse of CGI and no care for the frailty of a human body – and routinely fails in being funny, as instead of laughing with the characters and the movie, you’re laughing at them.

Note: major spoilers ahead for The Predator.

Set in present-day, The Predator opens with a small alien spaceship being chased by a bigger one. The former escapes through a wormhole it creates, and as it crash lands on Earth, it disrupts a covert mission being carried out by former US soldier turned mercenary Quinn McKenna (Boyd Holbrook, from Narcos). In the resulting chaos, a Predator kills Quinn’s unit, but he somehow survives and escapes with stolen Predator gear, which he promptly ships back home before he’s apprehended by a secret government organisation led by Will Traeger (Sterling K. Brown, from This Is Us). Meanwhile, a biologist named Casey Bracket (Olivia Munn, from X-Men: Apocalypse and The Newsroom) is brought in to study a captured Predator.

It’s here that Black’s infusion of humour into The Predator starts to come through, as he takes issue with the nomenclature of the series’ title. After being flown to a remote research lab, Casey is greeted by Traeger, who tells her that they have nicknamed it the ‘Predator’ because it enjoys stalking its prey (that’s us, the humans). The biologist interjects to say that they have got it wrong as anyone who enjoys it would be a sport hunter, say like a bass fisherman. Though Traeger sees her point, he states that ‘Predator’ is “cooler”, to vocal agreement from the doctors in the room. The conversation between the two is like witnessing a nerdy discussion between fans of the franchise.

Of course, as a film of this nature demands, the “Predator” soon escapes, just as Quinn – who had been deemed mentally unfit by Traeger to keep things under wraps – arrives at the research facility with a bunch of misfits, all former soldiers affected by PTSD in one way or another. That includes Trevante Rhodes (Moonlight), Keegan-Michael Key (Key & Peele), Thomas Jane (The Expanse), Alfie Allen (Game of Thrones), and Augusto Aguilera. They all have unmemorable roles that the actors will want to forget as well. Meanwhile back home, Quinn’s autistic son Rory McKenna (Jacob Tremblay, from Room) unwraps the Predator gear his father sent, and quickly figures out the advanced alien tech, unbeknownst to his mother Emily (Yvonne Strahovski, from The Handmaid’s Tale). Aside from throwing in characteristics that it has no time to treat with nuance or for the sake of humour – which includes PTSD and autism in addition to Tourette syndrome – The Predator’s characters and plot events are described as haphazard at best. A few minutes after being introduced as a biologist, Casey is jumping onto buses and trying to take down a Predator with a tranquiliser gun. Meanwhile, Rory learns the Predator language in what seems like an hour or so. Later in the film, the boy draws a map that points to an important location, and when Traeger & Co. arrive there by helicopter the same night, the team on ground has enough equipment that would take a day to set up at the least.

And when the film writes itself into a corner towards the end, it wears its defiance of logic as a badge of honour. With the Predator having killed a bunch of humans and having the rest cornered, it seemingly decides to give the others a few minutes of head start in lieu of wanting to destroy a spaceship, the one it was chasing at the start of the film. It makes zero narrative sense, except it allows Black to stage the film’s final moments in a nearby jungle, in what is clearly meant to evoke memories and serve as a homage to the Schwarzenegger original.

The Predator’s attempts at melding black humour and action horror result in an awkward tonal imbalance, where what’s supposed to be funny lands flat – or worse, what’s supposed to be serious comes across as funny. Part of that is because the film attaches no value the violence, with characters seeing someone die, reacting in horror and then carrying on two seconds later like nothing happened. And its perennial haste doesn’t allow necessary pause for moments to even register, as is the case for a major death in the final third, which is on screen so briefly that you might miss it. 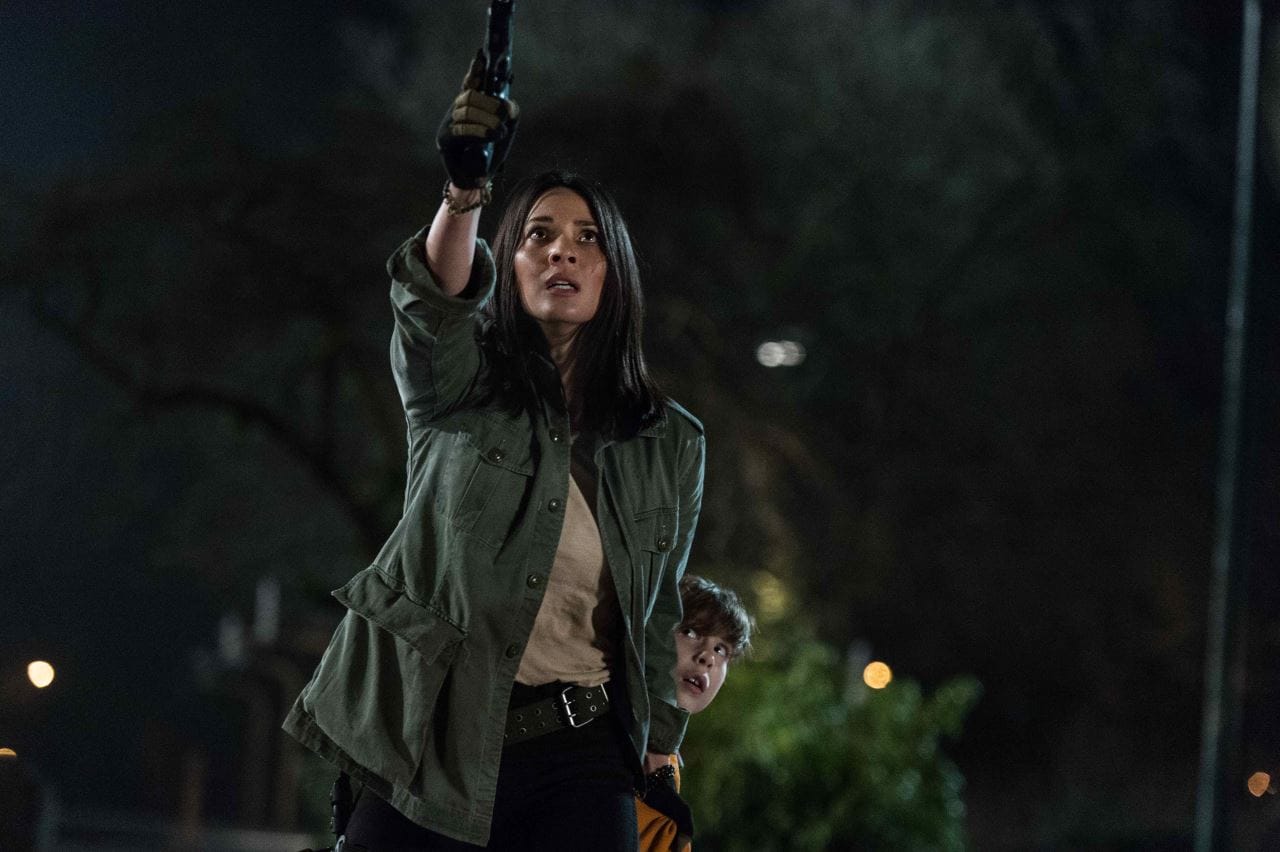 In doing all this, the film wastes good actors – Brown and Strahovski among them, the latter being forgotten midway through – in serving a plot so complex that you actually need characters to tell you what’s happening so that you can follow along. Of course, it’s not like any of it matters; the writers keep tossing in ideas with no interest in developing them further, including tying mankind causing its own downfall as the reason Predator visits are becoming more frequent. A sequel tease is also thrown in for good measure, with Black introducing an alien body suit called the Predator Killer, though we hope the film doesn’t gross enough that Fox feels confident in greenlighting any sequels.

Since its premiere at the ongoing 2018 Toronto International Film Festival last week, The Predator’s run-up to release has been shrouded in controversy, owing to the revelation that a registered sex offender – a friend of Black’s – had been cast in the film for a small scene, with the director opting not to inform anyone during filming. (He has since apologised.) After Munn learnt the truth about the situation last month, she told the studio, which decided to delete the scene altogether. It’s a shame they couldn’t do that with the rest of it.

Further reading: The Predator, Shane Black, Predator, Fox, 20th Century Fox
Akhil Arora Email Akhil Akhil Arora covers entertainment for Gadgets 360, interviewing stars such as Christian Bale and Anurag Kashyap, covering series premieres, product and service launches across the globe, and looking at American blockbusters and Indian dramas from a global socio-political and feminist perspective. As a Rotten Tomatoes-certified film critic, Akhil has reviewed over 150 movies and TV shows in over half a decade at Gadgets 360. When he is not completely caught up with new film and TV releases, Akhil ...More
Google's China Plan Spurs Inquiry From US Lawmakers, Staff Departures
Apple May Stop Bundling Lightning-to-Headphone Adapter With Older iPhone Models: Barclays

product The 2018 soft-reboot of the Predator series from writer-director Shane Black is an incoherent and convoluted mess that doesn't know what it wants to be. The Predator released this week in India and globally.

The Predator Is Terrible at Being Funny, Funny When It's Terrible
Comment