The Handmaid's Tale Is Blessedly Unflinching in Darker Season 2 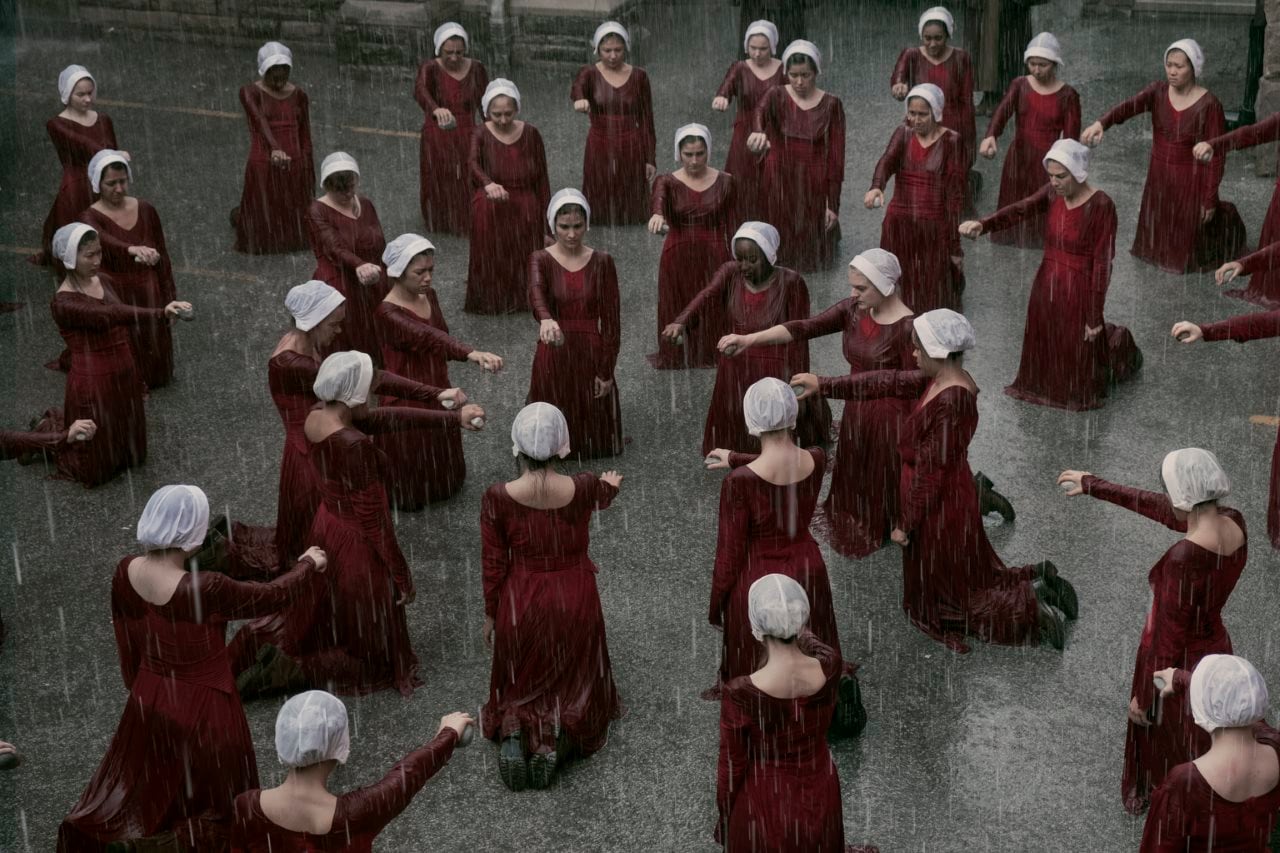 Ever since it began last year, The Handmaid’s Tale – the Hulu series adaptation of Margaret Atwood’s award-winning 1985 dystopian novel of the same name – has taken a deliberately different approach to its lead protagonist Offred’s (Elisabeth Moss) real name: June. Though Atwood never fully addressed it, the Emmy and Golden Globe-winning show made the name central to the character’s inner resolve, and how she clung onto the vestiges of her past life. It was a fundamental change from the book, and in our review of the first season, we hoped it would have a bigger meaning.

It’s taken a while for The Handmaid’s Tale to properly justify said change, but in its second season, which premieres with a double-header on April 25 and will have thirteen episodes, it builds on that idea in ways that fractures her identity and sense of self. At one point prior to the unravelling, she mutters to handmaids-overseer Aunt Lydia (Ann Dowd): “It’s June. You know my f—king name.” An unperturbed Lydia calmly retorts that June has no place in Gilead, the totalitarian militarised government now ruling the US in the name of God, but Offred can make a life for herself if she’s a “good girl”.

Through this, the show further pushes on the new world order’s tenet that women are mere tools who are to be silenced, threatened, or harassed into following orders in any way possible, and as often as required. And it’s how The Handmaid’s Tale opens its new season, leading a series of rebellious handmaids to the gallows, on the back of their empowering group refusal to stone a fellow handmaid Janine/ Ofwarren (Madeline Brewer) in the season one finale. Of course, it’s a theatrical stunt since Gilead needs fertile women and they aren't exactly in abundance.

It’s not the only consequence for the handmaids, and some of it is acutely distressing to watch, a fact that made it tough for some to follow the show in the first place. And because The Handmaid’s Tale is now forging ahead of Atwood’s words in season two, it’s also more surprising narratively at every turn. For one, the new season brings a visit to the radiation-filled Colonies through the eyes of Emily (Alexis Bledel) – previously the handmaid Ofglen, and momentarily Ofsteven – who’s trying to survive alongside hundreds of other women.

Apart from adding hues of brown to the show’s visual palette, the Colonies also brings Janine into the picture soon after, plus a guest star for one episode, in Marisa Tomei (My Cousin Vinny, The Wrestler). Disease and death are common in those parts, which are like Gulags set in Chernobyl, and it routinely feels bleaker than the fate of the oppressed in Gilead. Things are much better for those who escaped to Canada – June’s husband Luke (O.T. Fagbenle), and her best friend Moira (Samira Wiley) among them – with the only horrors being past ones in their mind.

Both the Colonies and Canada are complementary to the primary story at Gilead, where Offred is further dehumanised at every turn now that she’s pregnant. While everyone around her keeps talking about what’s best for the baby, essentially worshipping it as a miracle, Offred’s participation is treated like a necessary nuisance. When a doctor administers a sonogram, he calls it Mrs. Waterford’s (Yvonne Strahovski) baby. In another scene, she’s told the only reason she’s alive is because of the baby. And later, when a character expresses concern for her mental health, it’s simply brushed off.

Like in its first season, The Handmaid’s Tale also relies on flashbacks to characters’ past lives to draw parallels and drive home its themes. Through it, the show touches upon June’s relationship with her social activist mother Holly (Tony and Emmy-winner Cherry Jones), the only part of Atwood’s book the show had left out in season one because the writers felt it'd work better alongside her pregnancy. And with Bledel promoted to series regular, Emily’s past gets a look-in as well, focusing on how the early days of the Gilead revolution impacted her life as an openly lesbian university professor.

Through her character, The Handmaid’s Tale also goes from being an accidentally-prescient show in its debut year to being markedly political. In one scene, when immigration officers refuse Emily from flying with her Canadian wife Sylvia (Veep’s Clea DuVall) and her kid, there are clear parallels to the travel ban passed by the Trump administration, which also uprooted families. It’s scary because it’s relatable and shows how quickly people can get used to terrible situations as the new normal.

The thought is echoed by June herself in another of her voiceovers: “Women are so adaptable; my mother would say. It’s truly amazing what we can get used to.” Overall though, the second season of The Handmaid’s Tale has less of those voiceovers, with the directors – Emmy-winner Reed Morano having departed to focus on her film career, Mike Barker and Kari Skogland become more prominent in her absence – choosing to focus even more on the incredible acting abilities of Moss, and how she’s able to say so much with just her face.

This was apparent even in the first season, where the show made ample use of Moss’ face to convey her feelings, and the wordless direction is dialled up to eleven in the second season, with the full range of the Emmy and Golden Globe-winning actress on display, as she communicates a variety of emotions that would take paragraphs on page in a space of a few seconds. It helps that she’s supported by a terrific female-led cast, with Dowd and Bledel – also Emmy winners for their work on season one – paying back the increased investment by the writers in their characters.

Add to that the creative team’s understanding and mastery of visual language, including the distinct colours employed by production designers Elisabeth Williams and Mark White that provide the hierarchy, functions, and subtext in Gilead, or how cinematographers Colin Watkinson and Zoe White play with light and framing to define the mood of a scene or a character’s state of mind. In short, The Handmaid’s Tale continues to be one of the best filmed series on television right now, one you should avoid watching on an iPad during your travels.

The only niggles are its one-dimensional male characters, a (lesser) habit of end-credits song choices that don't thematically fit, and a single subplot that feels convenient for the narrative. That’s only noticeable because everything else is so good, with the show continuing its journey on the dark and unflinching path despite having run out of Atwood’s map. The Handmaid’s Tale is back to remind us that progress isn’t a one-way street, and that if we fail to spot and hinder the reverse slide, we might find ourselves in a place where putting up a fight is too little, too late.

The Handmaid’s Tale season 2 premieres April 25 on Hulu with first two episodes. It will then air weekly on Wednesday until the end of the season.