The Handmaid's Tale Is a Terrific Argument Against Orthodoxy

Written and published over three decades ago, The Handmaid’s Tale – from Canadian author and Booker Prize-winner Margaret Atwood – is a work of dystopia that warns against the steady reverse slide towards conservative and patriarchal attitudes. Atwood wrote it during the Reagan era, when women were being attacked, figuratively and literally. The book was timely in 1985, but it’s prescient for 2017, in the age of Trump.

It’s only fitting then that Hulu has a new, modern adaptation of The Handmaid’s Tale by the same name, coming April 26. Like the book, the TV series is set in the near-future New England, where a totalitarian military dictatorship has overthrown the US government, suspended the Constitution and declared martial law, and established a rigid system that subjugates women in the name of declining fertility rates.

The land is now called Republic of Gilead, whose Christian-fundamentalist regime – composed entirely of men – has seen fit to found entire new social classes, all coded by specific colours. The show follows Offred (Mad Men’s Elisabeth Moss), a handmaid in the service of an elite couple, whose sole duty is to have ritualised sex with the male head – Commander Waterford (Joseph Fiennes) – and bear a child for the family. She endures it, she tells us, so she can one day be there for her daughter that was taken from her.

Handmaids don’t get to bring up their baby, or even name them. Instead, it’s the Commander’s wife, Serena Joy (Yvonne Strahovski), who will take over Offred’s baby the moment the umbilical cord is cut. Women without power, or viable ovaries serve in other roles. There’s Rita (Amanda Brugel), a housekeeper who’s labelled a Martha in the Gileadean society. And then there’s Aunt Lydia (Ann Dowd), an old woman who instructs the Handmaids in how to best serve the new world order.

The Handmaid’s Tale presents itself across three different inter-cutting timelines, all through the eyes of Offred. The first of those details the origins of Gilead aka the revolution, and how the devastating descent into theocracy happened. The second takes place at the Red Centre, a place of indoctrination where the Aunts taught women the new way of life. Those who resisted were beaten and punished to toe the line. The last timeline is that of the present, where Gilead is in complete control, and Offred is with the Waterfords. 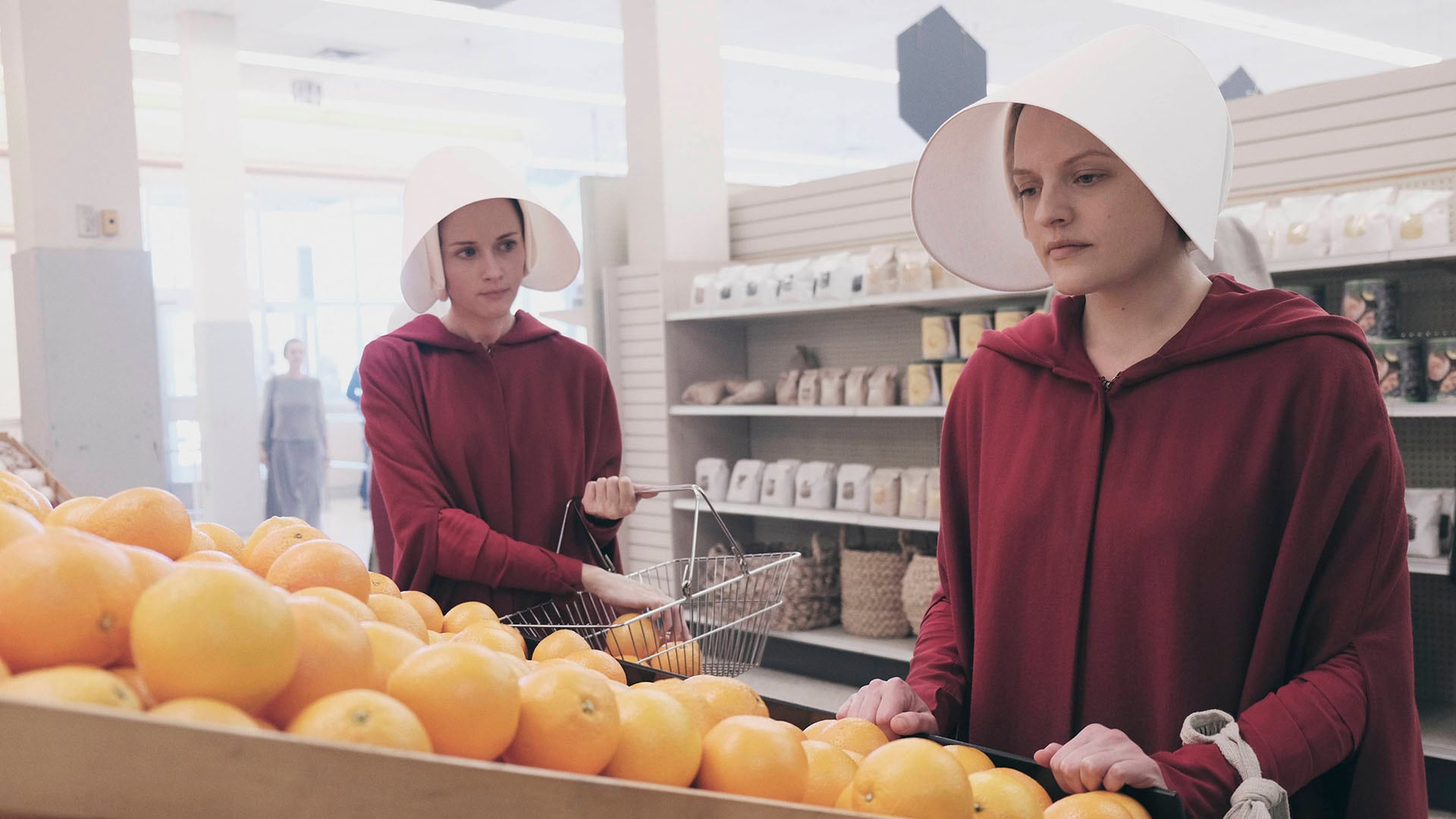 Alexis Bledel as Ofglen, and Elisabeth Moss as Offred in a still from The Handmaid's Tale
Photo Credit: George Kraychyk/Hulu

For those who have read the book, there are a few changes with the adaptation, to allow for the TV show to expand beyond one season. While the focus is on Moss’ character, The Handmaid’s Tale seems to have a larger emphasis on her handmaid friend Ofglen (Gilmore Girls’ Alexis Bledel). The show has also done away with the book’s white supremacy element, with characters of colour and other races very much part of the series.

Creator, showrunner, and executive producer Bruce Miller justified that change, saying they had a big discussion with Atwood before deciding on it. “Honestly, what’s the difference between making a TV show about racists and making a racist TV show?” he said in an interview. “Why would we be covering [Offred], rather than telling the story of the people of colour who got sent off to Nebraska?”

It’s a convincing argument that will no doubt have its detractors, but it makes for a richer show in the process, one that paints Gilead as a single-minded entity driven purely by its ideologies towards the female half of the race, rather than be split across racial divisions, too. That allows The Handmaid’s Tale to be leaner in the themes it portrays and tackles, and in turn be more emphatic in what it does.

Despite Atwood crafting pseudonyms for non-Caucasian races – the African-Americans were called Children of Ham, while the Jews were known as Sons of Jacob – the book always felt thinly sketched in that regard. For a large part, that was born out of the narration style, with Atwood putting Offred in the position of a diarist. With the show, Miller retains that for the most part, while tweaking the race of the people around her. Offred's best friend from pre-Gileadean times - Moira - is now played by Samira Wiley (Orange is the New Black).

And then there are more controversial choices. The subjugation of women extends to their identities, with each of them given new names, based on their Commander’s. Offred is basically "of Fred", which is the first name of Mr Waterford. Though Atwood hints at Offred's real name during the book, her name is kept a secret, the reason for which is only clarified in the unique epilogue. But the show completely does away with this ambiguity, with Moss ending the first episode by declaring her name. 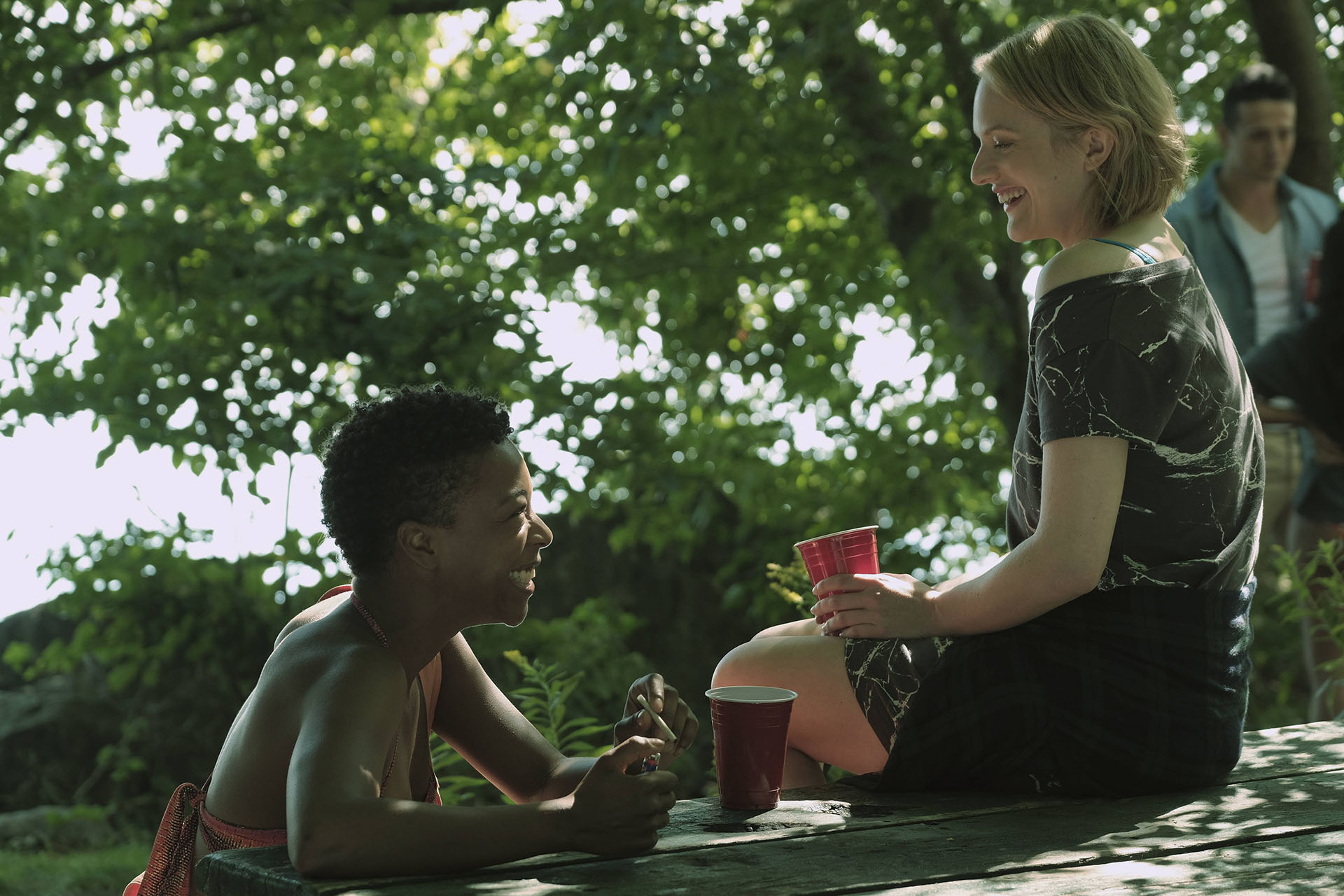 Samira Wiley, and Elisabeth Moss in a still from The Handmaid's Tale
Photo Credit: George Kraychyk/Hulu

Beyond the spoiler-ish book reason that we will stay away from, there are other possible interpretations for Offred never disclosing her identity. For one, it shows the characters' acceptance of the reality she's living. In the book, even though Offred reflects on her past life – she talks extensively about her husband, and what her mother would say – she never fantasies about returning to it. She knows there's no possible future where she will be known by her original name.

The show seems to have taken a different stance on the topic. For book readers, it'll be interesting to see if that has a bigger meaning. It’d be unfortunate for such a fundamental change to be meaningless in the long run. For what it’s worth, the first three episodes – that will be available on première date – also make it clear that the Hulu series, being a cinematic adaptation, will also play with Offred's narration and tone.

The character is much meeker in the book, which shows that she's been ‘properly trained’. ("Blessed are the meek," Aunt Lydia spats, whenever the handmaids raise the slightest of hell.) Here though, Moss brings more respite into her inner voice – telling us what she truly thinks of the people around her – which contrasts nicely with her outward demeanour towards those in power, which requires Offred to be submissive, pleasing, and agreeable.

The cinematic flourishes also come in the usual fashions. At the end of episode two, with Offred having scored what she believes to be a mini-victory, she walks in slow-motion to the pop rock tunes of Simple Mind's 1985 hit Don't You (Forget About Me), not something you would associate with the show’s – or especially the book’s – tone otherwise.

It also helps that the producers brought in acclaimed cinematographer and director Reed Morano to helm the first three episodes, which is the right way to convey a story about women’s rights (or rather, the lack of them). And though its depictions of a sterilised and colour-coded Gilead are stark in themselves, some of the show’s best scenes are those that resemble our world, only because of how relatable they are. 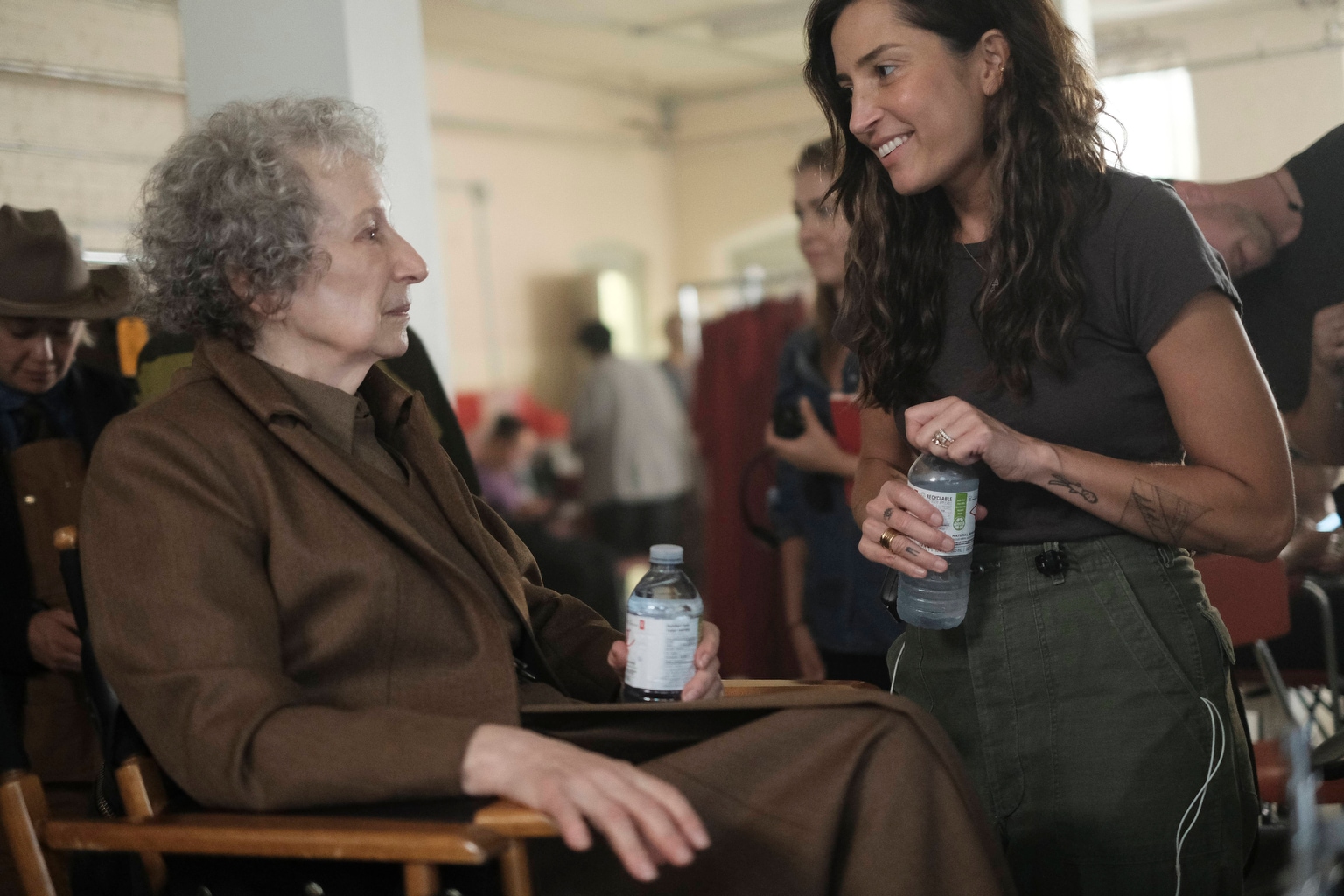 Margaret Atwood, and Reed Morano on the sets of The Handmaid's Tale
Photo Credit: George Kraychyk/Hulu

Halfway through the second episode, Offred – in the timeline before the revolution – wakes up to realise that her new-born (the daughter) is missing from her bassinet. As she walks around the deserted hospital – remember the falling birth rates – she comes across a hysterical woman cradling Offred's baby as if it’s her own, who is then promptly tackled by policemen.

In another harrowing moment from the third episode, her boss calls an office-wide meeting to inform them that he has been instructed to let all female colleagues go, in the next ten minutes. The women are then ushered out with local militia present to ensure no one even thinks of causing trouble. In the context of world leaders openly making sexist remarks in 2017, that scene doesn’t seem other-worldly at all.

With those moments, The Handmaid’s Tale encapsulates how easily things can go out of whack if we choose to be blind. After a shocking turn of events, Offred says as much: “Nothing changes instantaneously. In a gradually heating bath tub, you'd be boiled to death before you knew it.” The show – like Atwood’s book – is a fictional representation of a future that has existed in the past, or exists in parts today, if you know where to look. It argues for us to be eternally vigilant, and by way of Offred’s tale, it shows us why that’s so important.

Further reading: The Handmaids Tale, Hulu, Margaret Atwood
Akhil Arora Email Akhil
Akhil Arora covers entertainment for Gadgets 360, interviewing stars such as Christian Bale and Anurag Kashyap, covering series premieres, product and service launches across the globe, and looking at American blockbusters and Indian dramas from a global socio-political and feminist perspective. As a Rotten Tomatoes-certified film critic, Akhil has reviewed over 150 movies and TV shows in over half a decade at Gadgets 360. When he is not completely caught up with new film and TV releases, Akhil ...More
Watch How This Man Built an iPhone 6s From Spare Parts

product Hulu's adaptation of Margaret Atwood's 1985 dystopian classic has become accidentally prescient, but it's effective for many more reasons.

The Handmaid's Tale Is a Terrific Argument Against Orthodoxy
Comment