Sunny Kaushal as Surinder Sodhi in The Forgotten Army

With The Forgotten Army — the new five-part Amazon Prime Video miniseries that follows the Subhash Chandra Bose-led Indian National Army — creator and director Kabir Khan (Bajrangi Bhaijaan) wants to shed light on what he thinks is an overlooked chapter of our history. This isn't the first time he's tackling the story, having directed a staid six-part eponymous docu-series in 1999, which has aged poorly. Khan has been trying to revisit the topic ever since and his dream has finally come true, over two decades later. And with decades of experience and the financial might of Amazon behind him, The Forgotten Army promises a grand look at the INA, from their valiant efforts to the horrors they faced. Sort of like a South-East Asia extension to the terrific HBO miniseries The Pacific.

Unfortunately, Khan is too set in his Bollywood ways to deliver anything remotely close to an honest, grounded, and vivid account of the INA's Burma campaign, like The Pacific did for US Marines' Pacific theatre. The Forgotten Army — written by Khan along with husband-wife duo Heeraz Marfatia (Aazaan) and Shubhra Swarup (Wazir) — is driven by a need to make its protagonists come across as the hero, no matter how unconvincing it gets. But the much more egregious error is the constant reliance on a background song, which is sent in to rouse things up whenever the Amazon series is lacking in fervour. (Its combination with characters walking in slow motion is even worse.) The song is used so often that we felt like tuning off The Forgotten Army every time it was played.

To make matters all the more annoying, Khan & Co. also fall prey to Bollywood's love for grandstanding. At various points during The Forgotten Army — sometimes laughably in the middle of a battle — the good guys will launch into a mini-monologue to talk about their heart-breaking, righteous, and powerful backstories, value systems, and capabilities. This is the poorest kind of message filmmaking. Don't turn your characters into loudspeakers and don't lecture the audience. No one enjoys being talked down to. People can think for themselves and should be treated as such, not like a dumb flock of sheep. Simply give us a look at what happened — remember the old filmmaking adage: show, not tell — and trust the viewers to deduce the rest on their own.

Kabir Khan: ‘Secularism Is in Danger in Our Country'

The Forgotten Army isn't a simple retelling. Split across two timelines, World War II-era and mid-90s — which it switches between at will, using a mix of (poor) CGI, and archival footage at times — it follows Captain Sodhi (Sunny Kaushal) who reluctantly joined the INA after British-controlled Singapore fell to the Japanese in 1942. It traces his journey across Burma, alongside that of budding photojournalist Maya (Sharvari Wagh), who becomes his love interest. Meanwhile in 1996 Singapore, an elderly Sodhi (M.K. Raina) visits his extended family, where he meets another budding photojournalist in his nephew Amar (Karanvir Malhotra). With Amar, who wants to document student protests in now-Myanmar, Sodhi returns to the country 50 years on.

Naturally, the Amazon series spends more of its time in the period past. The INA, aligned with the Imperial Japanese Army, took part in several major battles, including the simultaneous Battles of Imphal and Kohima, oft called the Stalingrad of the East, referring to the largest World War II battle. But save for the Battle of Singapore, The Forgotten Army shows little care in depicting the various events, even though it wants us to know about the INA. What we're left with instead are fourth wall-breaking moments disguised as dialogues — “India will remember our sacrifice one day,” Sodhi says — designed to attach self-importance to itself. You shouldn't have to assert your own relevance to inform the audience why it matters. If people are watching, most of them already care.

As part of its self-important stance, The Forgotten Army makes a big deal out of having an all-women combat unit called the Rani of Jhansi Regiment. (Maya is part of it.) For what it's worth, it's valuable to talk about discrimination on the basis of gender when it comes to the Indian Army, more so in a time nearly eight decades on when India's newly-appointed chief of defence still believes women aren't suited to combat roles. But The Forgotten Army shoots itself in the foot, sadly. It first claims that women have never been trained and sent into combat before by any country. Fact-check: both Russia and Spain [PDF] did it before the INA. The Amazon series' much bigger fault, though, is how it undermines its own point by never actually showing Maya or any of the other women in combat.

Kabir Khan on The Forgotten Army: ‘I Don't Subscribe to the British Point of View' 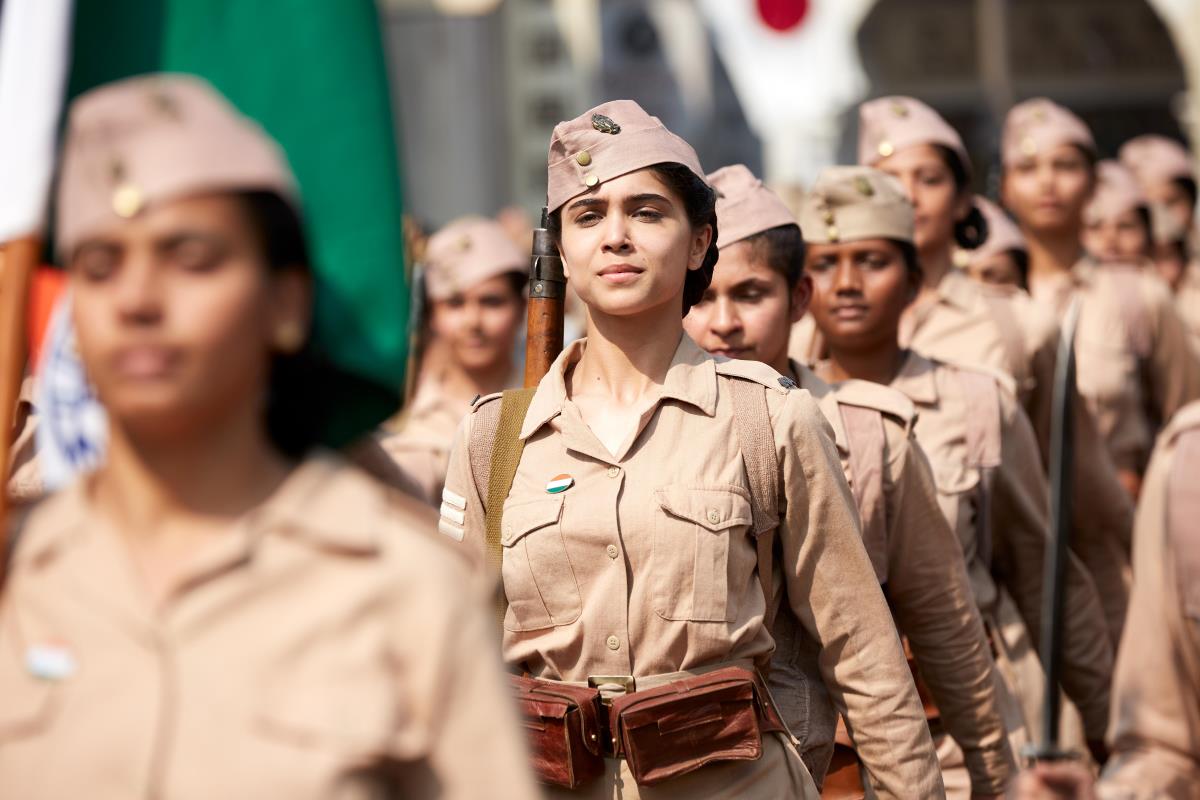 The Forgotten Army is also undermined by lacklustre, inconsistent, and unrefined filmmaking across the board. Primarily, the show suffers from tonal dissonances, as it switches between melancholy, celebratory, harrowing, romance, thrilling, situational comedy, and a sincere drama at will, with jarring results and little flow to the narrative. Speaking of poor writing, it wades into troubling territory with gender politics and patriarchy. On one occasion, a sexist male trainee officer is called out by a female one, who is later praised for overcoming his prejudice as the woman doesn't rebuke his romantic advances. Hello, it's not a woman's job to fix a man. Elsewhere, Sodhi, who is taught a feminist lesson by Maya, is later applauded for merely echoing her words in public. Can we please stop celebrating men for doing the bare minimum?

Additionally, characters make stupid decisions for the sake of the plot, or their dialogues are aimed more at the audience. (Speaking of poor exposition, Shah Rukh Khan is briefly employed as narrator, but it's entirely unnecessary as it recaps the previous episode to reminds you what's happening.) The direction isn't always solid, with some scenes either lacking the focus or proper structure to communicate what they are trying to achieve. In other places, Khan shifts into over-the-top mode to convey the heightened emotions of a character. There's simply no need to play everything up to such an extent. Realism is also an issue with many of its haphazardly executed and filmed war scenes, whose sole intention seems to be to showcase the bravado of the INA. (Thankfully, the action is saved from the general poor quality of CGI as it largely feels practically shot.)

That can be linked straight to The Forgotten Army's assertion that Indians were the only smart ones. Early on, as the British prepare for the Japanese attack on Singapore from the south-east, Sodhi warns them of the threat from the north. But the British belittle him. Expectedly, the Japanese do what Sodhi had predicted. Still, the Indians, then working for the British, keep the outnumbered Japanese at bay, only for the foolish British to sign a truce. Later on, with the INA making progress in Burma, the Japanese pause the attack as they strategise. Again, it's Sodhi who warns them of the impending monsoon threat. Expectedly, the Japanese don't listen and pay the price. The Forgotten Army also demonises the other, be it the British or the Japanese, to hand Indians the moral upper hand. The British war room during the Battle of Singapore in The Forgotten Army
Photo Credit: Amazon India

And there's little need to bother with this. Colonialism by its nature, including the British variety, is villainous by nature. But The Forgotten Army doesn't really know how to further the conversation. In one scene, Sodhi wonders were Indians blind or stupid in treating Britain as their nation, given their prior allegiance? That's a reductive argument. If it was really interested in looking inward rather than outward, Khan & Co. could have done well to address Bose's values. The INA keeps reciting his famous words, but his presence is so minimal that The Forgotten Army felts a bit of a whitewash, more so given Bose held socialist authoritarian views and worked with fascists. That would have also allowed it to talk about how the INA was being used by the Axis powers for its gain.

Where The Forgotten Army does marginally better is with the eerie parallels to what's happening in today's India. As the INA reaches the Indian mainland, it goes up against fellow countrymen, who battle Indians fighting for a free India. Later at the INA's Red Fort trials, a British Indian officer discredits the prisoners by calling them traitors for aligning with the Japanese. Sadly, this view of the INA persisted after independence, with governments denying [page 132] them freedom fighters' pension. And then there's the Burmese students who are campaigning for democracy. The parallels are naturally unintended, but they are relevant and feel prescient. One wonders if Khan would have expanded on these topics if The Forgotten Army was being written in 2020.

But that can't rescue a show that doesn't have a handle on the fundamentals. Even with these aforementioned parallels, The Forgotten Army wraps them up with an on-the-nose dialogue by the elderly Sodhi: “The struggle for freedom was ours. The struggle to preserve that freedom is yours.” It shouldn't have to be spelt out, it's the job of the images to convey that. Khan thinks the INA deserve better treatment. Well, they also deserve a better series.

The Forgotten Army is out now on Amazon Prime Video worldwide.