The Boys Is a Product of Everything That It Mocks

Spoilers ahead for The Boys season 2.

Erin Moriarty as Annie, Jack Quaid as Hughie in The Boys season 2

In The Boys comics, first published in 2006, the Seven — the corporatised group of superpowered individuals — were created as an analogue to DC's Justice League. Queen Maeve (Dominique McElligott) is Wonder Woman, Black Noir (Nathan Mitchell) is Batman, A-Train (Jessie T. Usher) is The Flash, the excommunicated Deep (Chace Crawford) is Aquaman, the now-dead Lamplighter (Shawn Ashmore) is Green Lantern, and of course, Homelander (Antony Starr) is Superman (with bits of Captain America on the show). Except by the time Amazon got around to making an adaptation of the anti-superhero satire a couple of years ago, the world of superheroes had been transformed.

Marvel is now the undisputed king of superhero fare, having delivered 23 inter-connected films in the span of 12 years that have grossed over $22.5 billion (about Rs. 1,65,000 crores) at the box office alone. No wonder then that The Boys prefers to train its lens on the behemoth that is the Marvel Cinematic Universe. On season 2, The Boys drops mentions of the “Vought Cinematic Universe”, shows the Seven being contracted as actors to stars in corny, inspirational films where they spout pithy dialogue, and pokes fun at corporate synergy. Just as Marvel series will soon air on Disney+, the Vought-managed “supes” have their own shows that air on Vought.

But for all its pot-shots at Marvel, The Boys would sure love to be the MCU too. And it has already started to go down that route. In late September, Amazon announced that it was developing a spin-off that would be set in an American college. It took Game of Thrones six seasons before HBO began developing spin-offs. With The Boys, it took Amazon a season and a half. Amazon is said to be “fast tracking” The Boys spin-off because season 2 had the biggest launch for an Amazon original series — nearly doubling the audience from season 1 — but without exact numbers, it's impossible to say how successful it has really been. After all, can you even name Amazon's previous biggest original?

More importantly, The Boys largely operates with the same playbook as Marvel movies: a bunch of character-based scenes, stitched together by action set-pieces that bring in superhero-loving audiences. Except its action isn't as elaborate as Marvel, for it's not being made on the same budgetary scale, and tends to suffer from the same problem as its DC counterpart: every supe punches every other supe really hard. As for storytelling, The Boys is an extension of what the likes of Deadpool and Guardians of the Galaxy have done in making the superhero genre more self-aware, and poking fun at the clichés while also benefiting from them. In short, it's have your cake and eat it too. 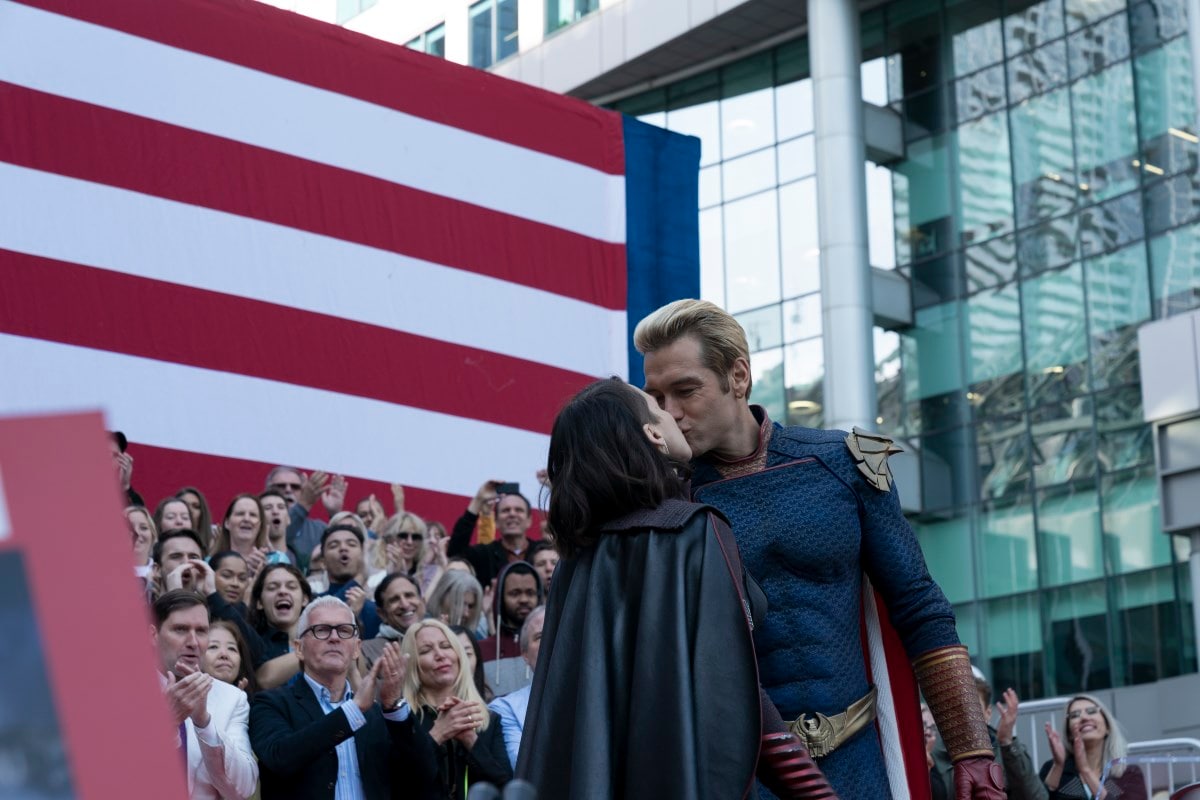 And it's not always successful is pushing those boundaries either. The Boys' anti-superhero satire doesn't go beyond those aforementioned surface-level jokes too often. Rarely is the Amazon series able to dig into the excesses, absurdity, and power fantasy of the superhero culture. Where The Boys — under its showrunner Eric Kripke (Supernatural) — is more successful is in touching upon themes that are largely out of the MCU's PG-13 purview: sexual harassment, white supremacy, political polarisation, and America's gun laws.

Most of those are tackled on The Boys season 2, with the help of new supe entry Stormfront (Aya Cash). During the course of the season, she reveals herself to be a Nazi who's nearly a hundred years old and the former wife of Frederick Vought, the founder of Vought who used Stormfront as one of his first test subjects for Compound V, the substance that gives supes their powers. But that's just backstory. Stormfront is the face for every racist white person crying about white genocide, Latin American refugees, and forwarding fear-mongering memes in Trumpian America, which has driven ideologies to their most extreme and fuelled culture wars.

The environment has been exaggerated by introducing supes into the mix, but in doing so, The Boys season 2 is able to emphasise how crazy the US — and the larger world — is today. In the penultimate episode, we see how a loner is radicalised by the hate being spewed on social media and right-wing media, in that there are supe-terrorists allegedly hiding in America, and eventually ends up killing a convenience store employee simply because of the colour of his skin. (This analogy can easily be extended to the lynchings in India due to fake news circulating on WhatsApp.) And The Boys season 2 finale opens with a training video for students and teachers when super-villains attacks schools, and it's a depressing reminder of the state of gun control debate in the US.

Unfortunately, The Boys doesn't do as well with its main storylines. Deep's arc involving a Church of Scientology-like institution feels most underwritten, and Maeve had little to do on season 2, as her narrative — which involved her trying to rekindle things with her former girlfriend Elena (Nicola Correia-Damude) before completely falling apart as her LGBTQ identity is forced into public view by Homelander — seemed to be spinning gears. The Boys season 2 decided to put a spotlight on Frenchie's (Tomer Capon) backstory six episodes into its eight-episode season, which seemed to stick out for the Amazon series lost much-needed momentum as it approached the landing. 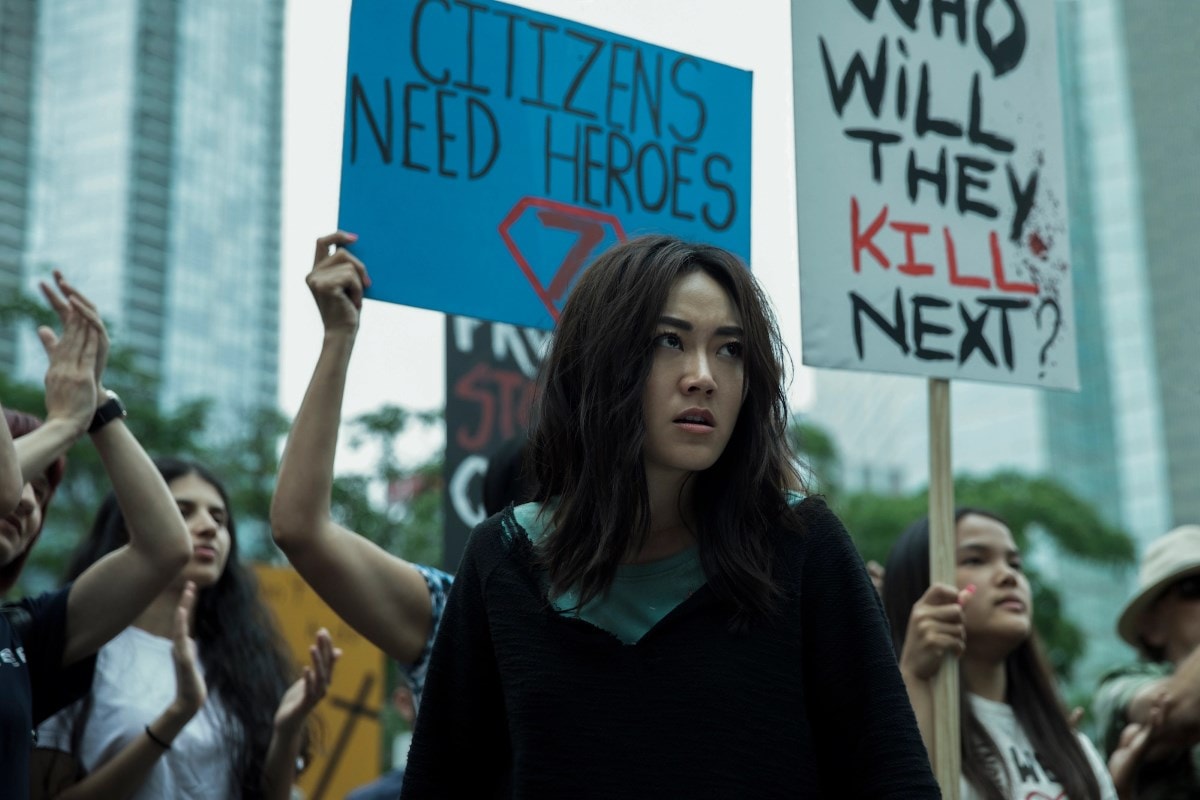 Additionally, it was too happy to do away with new characters, after it had given them considerable time. Kimiko's (Karen Fukuhara) telekinetic brother Kenji (Abraham Lim) ended up being a pawn in the initial fractious dynamic developing between Homelander and Stormfront, and had a bit of effect on the relationship between Kimiko and Frenchie, who has been trying to save her to ease the guilt he carries. The same happened with Lamplighter, who is thrown into the mix, goes from sworn enemy of Frenchie to a lynchpin in the Boys' plan as star witness in the congressional hearings, but then kills himself in the next episode, rendering that useless as well.

And most of all, Stormfront, who had a lot of screen-time on The Boys season 2 and played a crucial part in Homelander's journey, was then killed off in the finale. The Amazon series loves a whiplash. One moment, Stormfront is the new hero America loves. And Starlight (Erin Moriarty) is the mole in the Seven and locked up. Next, Starlight has been freed because ‘oh we're sorry, we were fooled'. Stormfront is the true villain and has been “neutralised”. All this on the back of the public learning that supes are made, not born, thanks to Compound V. Why should Americans place any trust in what the Seven and Vought do anymore? Where is the accountability and international pressure? It all feels too easy.

The Boys also has a problem of being too plot-driven. The best episode in season 2 was the one where it essentially took a breather, with Hughie (Jack Quaid) and Annie (Moriarty) on a road trip with Marvin “MM” (Laz Alonso), and a long-awaited reunion between Billy Butcher (Karl Urban) and his now-dead wife Becca (Shantel VanSanten). In a way, it's a dreamy episode as it gives the protagonists a glimpse at the coveted life. But it's also brutal and truthful as it's rooted in the ugliness of its world. Becca can't go with Billy because her son Ryan (Cameron Crovetti) is a billion-dollar Vought asset. And Annie and Hughie can't keep seeing each other because it's too dangerous.

That ties into Annie's realisations on The Boys season 2, as she admits to her mom: good guys don't win, bad guys don't get punished. Her thoughts are later echoed by Maeve, who notes that nothing ever gets better. Towards the end of the finale, both women have to stand and smile next to Homelander, and pretend as if the day has been won. In that sense, The Boys is much more grounded and realistic than Marvel. At the same time, it also lives by the values of Captain America, thanks to Hughie, whose never-ending support and unwillingness to give up pushes Annie. It's only fitting — after all, The Boys exists because of the MCU.

The Boys season 2 is now streaming in its entirety on Amazon Prime Video worldwide.

Further reading: The Boys, The Boys season 2, Amazon Prime Video
Akhil Arora Email Akhil
Akhil Arora covers entertainment for Gadgets 360, interviewing stars such as Christian Bale and Anurag Kashyap, covering series premieres, product and service launches across the globe, and looking at American blockbusters and Indian dramas from a global socio-political and feminist perspective. As a Rotten Tomatoes-certified film critic, Akhil has reviewed over 150 movies and TV shows in over half a decade at Gadgets 360. When he is not completely caught up with new film and TV releases, Akhil ...More
Sony ZV-1 Review
Flipkart, Amazon Have Excellent iPhone 11, Galaxy S20+ Sale Offers, but Will They Have Enough Stock?