And obviously, more monster trouble is brewing as well in Stranger Things season 3.

The Hawkins crew is growing up — and apart. In Stranger Things season 3 — out Thursday, July 4 on Netflix — the kids are now teenagers, which in turn affects not just the dynamic between the group but also the show on the whole. Mike (Finn Wolfhard) and Eleven (Millie Bobby Brown) are spending most of their time with each other, to the displeasure of the rest of the gang and her adopted father Chief Hopper (David Harbour). Having lost over a year of his childhood to the monsters, all Will (Noah Schnapp) wants is to play Dungeons & Dragons like the boys used to, but Mike and Lucas (Caleb McLaughlin) — who also has a girlfriend in Max (Sadie Sink) — aren't really into it anymore. And Dustin (Gaten Matarazzo), feeling ignored by everyone, starts to spend more time with Steve (Joe Keery), which further suggests that the AV Club is ready for a split.

While Stranger Things has been a coming-of-age story from the start, at least for most of the young characters, the third season of the hit Netflix series seems to be the pivotal turning point of their arcs. Eleven is at the heart of this, as she finally gets the chance to discover herself after two seasons of having to be hidden for her own safety. The start of Stranger Things season 3 hints that Hopper and El's parent-daughter relationship might not have a long future when the dust settles. That's just one of several subplots that are set in motion during the early going, with the third season continuing the second season trend of sending groups of characters on branching storylines, which will naturally come together as the season progresses.

Additionally, Stranger Things 3 benefits from the change of setting. It's set in the (American) summer of 1985, which allows it to leave behind the gloomy autumn that contributed to the mood on the first two seasons. On screen, that also contributes to a vibrant blast of colours and nowhere is that more obvious than at the new locale that brings everyone together: Hawkins' shiny new Starcourt Mall. For the kids, it replaces the school as the common hangout. But it's a step better for the show, as it can pull in people of all ages, including those old enough for college (such as Steve), while using it as a setting for the third season's narrative that spans teenage romances, new human villains, and a big battle with the monster from the Upside Down, as a recent trailer more than hinted at.

We open one summer earlier, in the June of 1984, as a six-minute near-wordless scene sets up the new threat, or rather a new pathway to the old threat. Jump forward a year and the kids are making the most of their summer, staying out late and sneaking into the cinema using a backdoor to watch films such as the zombie horror Day of the Dead. (Where are the ushers?) Of course, this being Stranger Things, something is amiss in Hawkins within the first 15 minutes. Will is the only one who can feel it though, suggesting he retains a tiny bit of that connection to the monster, even though it was driven out of him in season 2. His psychic powers are again reminiscent of Harry Potter's scar, except he now has PTSD in place of the visions he had earlier.

Of the young adults, the couple Nancy (Natalia Dyer) and Jonathan (Charlie Heaton) — Mike and Will's elder siblings, respectively — are working at the local newspaper The Hawkins Post. While her boyfriend is seemingly allowed to manage the photo department on his own, Nancy is naturally not taken seriously as a writer since this is the eighties, and made to do office errands such as coffee and lunch instead. This rightly annoys her to no end and pushes her to take up assignments on her own. One of the constant thorns in her side is a senior journalist named Bruce (Jake Busey), whose personality makes him the perfect monster-meat, given the distaste viewers will have for him. You'll likely feel the same way for Hawkins' Mayor Kline (Cary Elwes) — another new character — who orders Hopper around.

Speaking of Hopper, the only real policing he's doing is Eleven's, while trying to re-insert himself in Joyce's (Winona Ryder) life, who is still recovering from losing season 2 boyfriend Bob Newby (Sean Astin). As with last time, Joyce is the one of the few ones concerned with investigating even the tiniest strange happenings, alongside Nancy, though the latter is seemingly doing out of proving she's good at her job and not because she thinks something is happening in Hawkins. Amongst the kids, it's the left-out Dustin who stumbles onto a secret and then accepts the help of Steve's smarter ice cream parlour colleague Robin (Maya Hawke), who is also the only addition to the main cast of Stranger Things season 3. Robin adds a new dynamic to the Dustin-Steve bromance that came to life in season 2, and she's also set up as a romantic interest for the elder of the two. 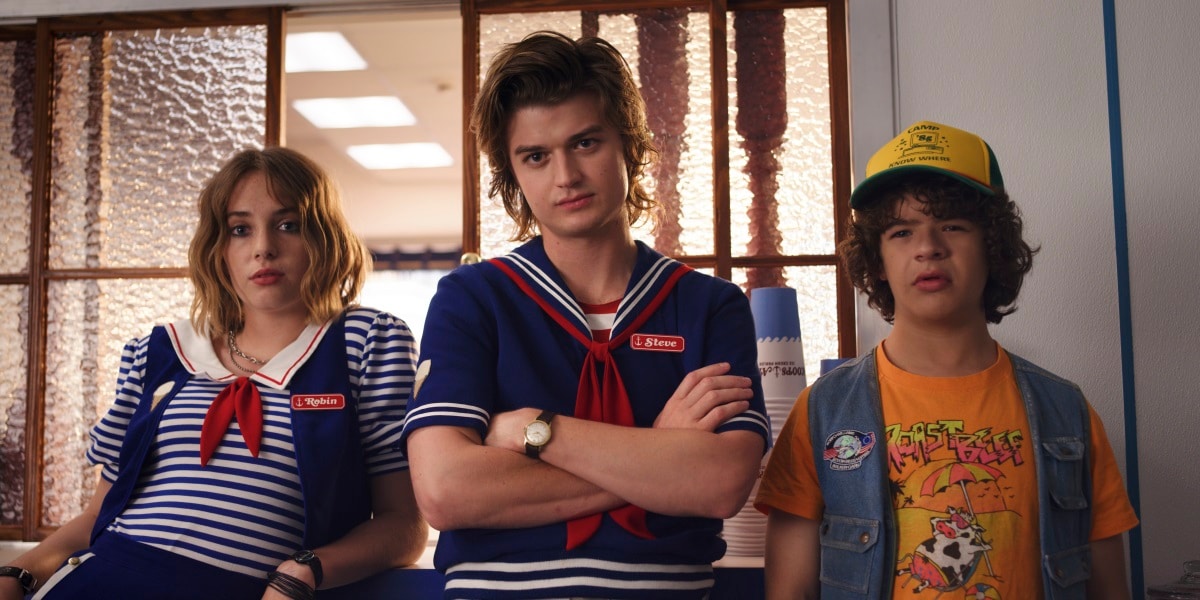 Said bromance gets more spotlight on Stranger Things 3, with the co-creators Ross and Matt Duffer — professionally known as The Duffer Brothers, who also serve as writers and directors on several episodes — clearly aware of the shared chemistry and how delightful they were to watch last time around. That ultimately speaks to what keeps audiences hooked. Even as the monsters might bring in viewers and drive the plot, Stranger Things is loved for its endearing characters, their interactions, and the growth in their relationships. And while the third season of the Netflix series continues previously established ones, including the strong bond between Joyce and Hopper, it also makes room for new ones such as Max and Eleven's, who gets to emerge from the cocoon she was kept in. While everyone's dealing with teenage life, this is the first time that El realises what it's like to be a kid and enjoy herself.

But the character development isn't spread out across the board. The likes of Jonathan have little to do other than accompany Nancy on her adventures, while Stranger Things season 3 turns Lucas and Max into sounding boards for Mike and Eleven, respectively. Their purpose, at least in the three episodes we had access to, is to serve the other person's storyline. And of course, it's futile to bring up Mike and Nancy's mother Karen (Cara Buono), who had little to do in season 2 except that flirt scene with Max's elder brother Billy (Dacre Montgomery). Sadly, Stranger Things 3 can think of nothing except to continue that sole strand as and when it pleases. It's bemusing that Buono is still listed in the show's main cast, given the treatment meted out to her character. The only other bother is a bit of narrative convenience that kickstarts a subplot.

As always, Stranger Things is filled with nostalgia for those of a certain era, with famous scenes from TV shows such as Magnum P.I. and Cheers playing in the background, in addition to a soundtrack boasting of hits from Madonna, The Cars, Cutting Crew, Don McLean, Foreigner, Jim Croce, REO Speedwagon, and Corey Hart. Some songs are used particularly for the lyrics' on-the-nose effect. And thanks to intriguing-enough thrills (though lacking the emotional impact of season 2) and the joys of watching the Hawkins crew turn into adults in front of our very eyes (albeit potentially at the cost of their close-knit friendship), Stranger Things season 3 turns out to be a welcome return for Netflix's popular sci-fi horror series. It's made a bit more special by the fact that it spent nearly two years off air.

Further reading: Stranger Things, Stranger Things season 3, Netflix
Akhil Arora Email Akhil
Akhil Arora covers entertainment for Gadgets 360, interviewing stars such as Christian Bale and Anurag Kashyap, covering series premieres, product and service launches across the globe, and looking at American blockbusters and Indian dramas from a global socio-political and feminist perspective. As a Rotten Tomatoes-certified film critic, Akhil has reviewed over 150 movies and TV shows in over half a decade at Gadgets 360. When he is not completely caught up with new film and TV releases, Akhil ...More
Spider-Man: Far From Home Tickets Now Live on BookMyShow, PVR in a Few Cities
Huawei P30 Series Sees 10 Million Units Shipped, 62 Days Earlier Than P20 Series

product In Stranger Things season 3, set in the summer of 1985, the Hawkins crew are full-fledged teenagers dealing with new romances and threats old and new. Stranger Things 3 release date in India is July 4 on Netflix.