Sonic the Hedgehog Movie Review: Trying to Be Deadpool for Kids, but Missing Sonic’s Appeal

If only it could’ve fully embraced Jim Carrey’s goofiness.

Sonic, voiced by Ben Schwartz, in Sonic the Hedgehog movie

Early in May last year, we got our first look at Sonic the Hedgehog, and the titular blue hedgehog who can run at supersonic speeds. The Internet collectively recoiled in horror at the sight of Sonic's human-like teeth, animal-like fur, and the widely-set eyes — the in-trailer reaction of James Marsden's lead human character upon first laying eyes on the creature was a poetic meta-meme — and nearly as quickly as it would take Sonic to circle the globe, first-time feature director Jeff Fowler & Co. vowed to make the desired changes and the Sega mascot's first live-action appearance the “best” it can be. That was an unprecedented moment. Sonic the Hedgehog was pushed off its earlier release date to give time for the redesign, and it's gotten better for it.

Except that's hardly the film's only problem — or even its biggest. Like many video game adaptations that have come before it, Sonic the Hedgehog struggles to deliver in the writing department. The script comes from Pat Casey and Josh Miller, best known for the short-lived Fox animated series, Golan the Insatiable. Instead of immersing the audience in Sonic's rich, fantastical home-world that the film briefly visits, it keeps us in a corner of the non-descript human world that robs the film of any identity. That allows it to insert all sorts of pop culture zingers, be it Fast and Furious, Spider-Man, Star Wars, Men in Black, or the floss dance, but they rarely ever land with more than a thud. Add to that egregious product placements for shopping giants, dining chains, and real estate listings.

All that weighs down Marsden and the voice of Sonic, Ben Schwartz (Parks and Recreation), whose pre-filming brief, we guess, must have gone: Deadpool but for kids, like you know, Pokémon: Detective Pikachu. But Sonic the Hedgehog never affords him the room to stretch his improv muscles, which Ryan Reynolds has acquired with his star power in recent years. Where the Sonic movie trumps the Pokémon one is with its villain (and tonal balance that go hand-in-hand). Jim Carrey has the time of his life back in his ‘90s groove, fully giving into the cartoonishness of his character, from the way he walks and talks to the costumes and the tools he's given to work with. It's almost as if Carrey is starring in his own separate movie at times. 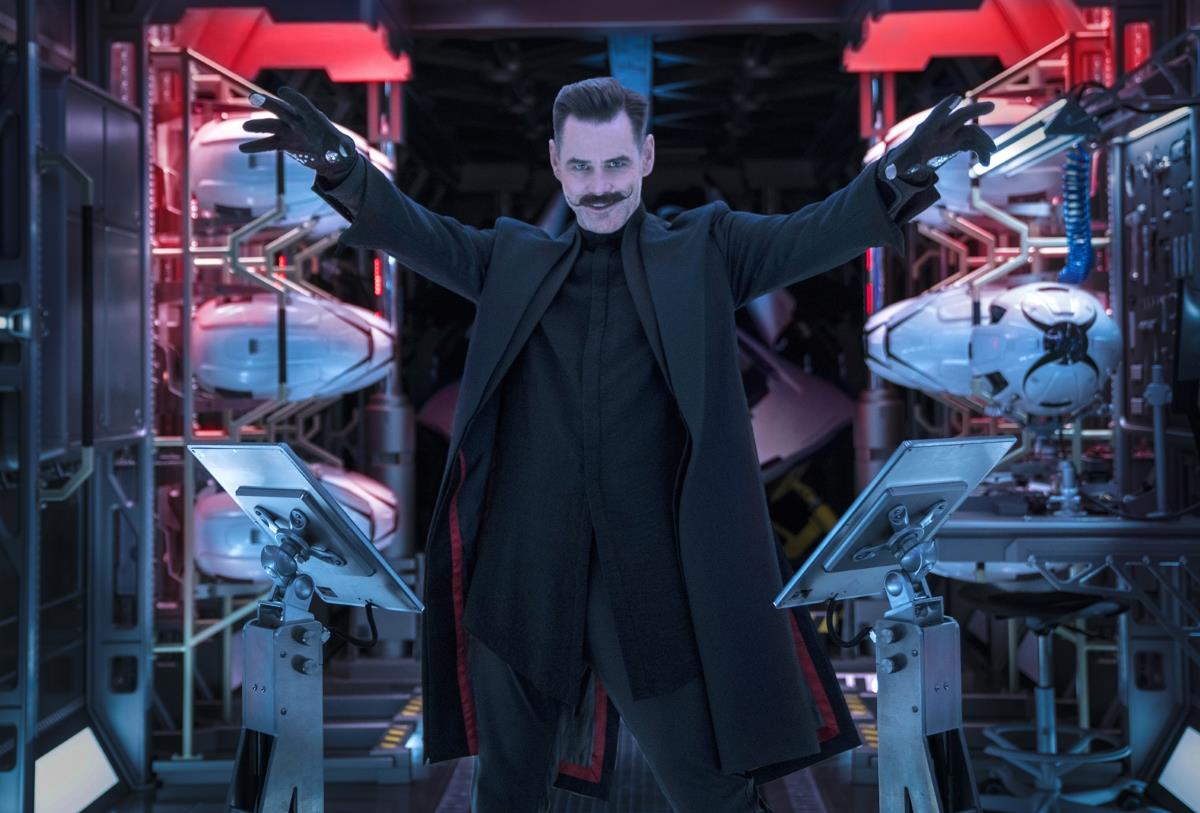 Sonic the Hedgehog opens on Earth with a moment pulled from deep within the film, before our protagonist (Schwartz) breaks the fourth wall and transports us back to his alien home-world. There, he informs us of his lovely school-free childhood, which is then rudely interrupted by bow-and-arrow toting folks looking to hunt Sonic down. Thankfully, his anthropomorphic owl caretaker — don't ask questions — is around to get him out of danger just in time. Driven from home, Sonic ends up in the US state of Montana, which is bigger than Rajasthan but with fewer people than Chandigarh, essentially the middle of nowhere. He grows up in the midst of humans while they — except one old man whom nobody believes — are none the wiser, all alone and on his own.

Sonic spends his days running around and people-watching, with the town sheriff, Tom Wachowski (Marsden) and his veterinarian wife Maddie (Tika Sumpter) being his favourite among them. It's a peaceful and harmless co-existence. But everything changes one night when Sonic causes an accident that brings down the Pacific Northwest power grid, setting off alarm bells in the Pentagon. The US' top defence brass pick an eccentric inventor called Dr. Robotnik (Carrey) to lead the investigation, which is one of the most ridiculous and illogical choices in Sonic the Hedgehog that's never questioned. We waited for everyone in the room to burst out laughing at the prospect of hiring a madman, but the moment never came.

A lover of machines, especially surveillance drones, Robotnik is soon onto Sonic, who decides to get out of town with the help of his yellow portal rings. (The rings don't do that in the video games.) But with his next destination — the Mushroom Planet — unappealing on account of no living beings and well, entirely made up of mushrooms, Sonic chooses to inexplicably hide in Tom's garage. A curious decision for someone who can literally run away from his problems in a second. It sets up their encounter and the rest of Sonic the Hedgehog, as the two are pushed into a road-trip with Robotnik on their heels. Yet another curious decision for a character better known for effortlessly pulling off loop-the-loops, who's now stuck in redneck bars, roadside motels, and a pick-up truck.

For what it's worth, that acts as the gateway for the film's themes and action. It's more fun in the latter department, though the two best set-pieces are reminiscent of what the X-Men movies had done with Quicksilver (Evan Peters) in 2014's Days of Future Past and 2016's Apocalypse. Sure, the blue alien is even faster than Magneto's son but Sonic the Hedgehog doesn't innovate enough to eclipse those memories. (The film's physics are slightly questionable in other places.) As for the former, it touches upon loneliness, mortality, ambition, helping others, the importance of friends and family, and appreciating what you've. Sonic the Hedgehog never really digs deep — it's an easy breezy kids' film for the most part — but it does attempt to engage with them. And that's something.

But if Fowler & Co. had to give us a Sonic movie — Sega has been trying to make one since 1994, with long periods spent in development hell — in today's intellectual property-saturated Hollywood, they needed to do a lot more that. A more slapstick approach, one that played more to the tune of Carrey's Robotnik, could have helped the cause. Though it's hard to imagine how that would fit within the constraints of the human world forced upon it. Maybe Sonic the Hedgehog would have been better off staying put in the home-world from the beginning. If it had gone that route, there would have been little need to make Sonic look realistic, saving the makers both time and money. Sonic's new design is all good, but that's only good enough to sell toys.

Sonic the Hedgehog is out February 28 in cinemas across India. There is one mid-credits scene.

Further reading: Sonic the Hedgehog, Sonic the Hedgehog movie, Paramount Pictures, Viacom18, Viacom 18, Viacom18 Motion Pictures, Sega, Jim Carrey
Akhil Arora Email Akhil Akhil Arora covers entertainment for Gadgets 360, interviewing stars such as Christian Bale and Anurag Kashyap, covering series premieres, product and service launches across the globe, and looking at American blockbusters and Indian dramas from a global socio-political and feminist perspective. As a Rotten Tomatoes-certified film critic, Akhil has reviewed over 150 movies and TV shows in over half a decade at Gadgets 360. When he is not completely caught up with new film and TV releases, Akhil ...More
Nubia Red Magic 5G Will Have an Exciting Colour Combination, TENAA Listing Tips
WhatsApp Dark Mode Gets Additional Solid Colour Options on Android

Sonic the Hedgehog Movie Review: Trying to Be Deadpool for Kids, but Missing Sonic’s Appeal
Comment