Having failed to craft a successful shared superhero film universe à la Marvel, mostly owing to the critical failure of the grim and dour approach of Zack Snyder's unofficial trilogy — Man of Steel, Batman v Superman: Dawn of Justice, and Justice League — DC and Warner Bros. have been singing a different tune recently, one that calls for a renewed focus on individual stories with a style that best suits each chapter. Shazam!, unburdened by what has transpired in the rest of the flailing DC world, represents one direction of that new strategy. It was clear from the film's first look last year that it was an anti-thesis to what DC had become known for, and the final output — releasing April 5 in cinemas worldwide — is what Ragnarok was to the Thor trilogy.

Like that well-received third iteration of the Marvel demigod, Shazam! is both joyous and fun, albeit for very different reasons. Superhero stories are, at their core, simply about wish fulfilment. Shazam!, which is centred on 14-year-old Billy Batson (Asher Angel, from Andi Mack) who can transform into a super-powered adult (Zachary Levi, from Chuck) by shouting the word “shazam”, is literally that. The fact that its hero is a teenager and isn't carrying the weight of the world on his shoulders — unlike nearly all his DC counterparts — benefits the film greatly, as Billy and his foster brother Freddy Freeman (Jack Dylan Grazer) have the time of their lives with the limitless abilities that have been bestowed upon one of them.

Of course, a superhero film, by its very nature, also requires an antagonist and dramatic tension. David F. Sandberg is an interesting pick to deliver on that requisite, given his background as a horror film director. He is best known for the 2016 supernatural flick, Lights Out. Working off a script by Henry Gayden (Earth to Echo), Sandberg kicks off Shazam! with a less-than-convincing opening scene that's more reminiscent of his adult-leaning work than the to-be tone of the film. It sets up the backstory of the villain, Dr. Thaddeus Sivana (Mark Strong, from the Kingsman film series), who bears a grudge against his family for what he perceives to be unfair treatment and emotional abuse as a child in the ‘70s.

Fast forward to present day Philadelphia, where we are introduced to young Billy, who has been jumping foster homes all his teenage life while looking for his biological mother, whom he lost at a carnival as a 3-year-old. After another entanglement with the police and child services, Billy is placed at a group home with an eager married couple who used to be foster kids themselves. There, he's welcomed in by most of his new foster siblings — the eldest, college-bound Mary (Grace Fulton), obsessive gamer Eugene (Ian Chen), less-talkative Pedro (Jovan Armand), the youngest, hug-loving Darla (Faithe Herman), and superhero-obsessed Freddy — but Billy remains distant because he expects to jump ship soon again.

Things change though after Billy ends up in the lair of a wizard named Shazam (Djimon Hounsou, from Guardians of the Galaxy), who grants him magical powers upon the utterance of his name. A freaked-out Billy — now looking like an adult — confides in Freddy and the two then begin to test out the extent of his newfound powers, which involve superhuman strength and speed, bullet and fire immunity, limited flight capabilities, and the ability to buy beer. It's here that Shazam! properly kicks into gear, with the two kids — even though one of them looks like he's pushing 40 — having a blast as they stumble into problematic situations, sometimes of their own making.

Shazam! also draws a lot of humour from Freddy trying to think of a heroic name for Billy's alter ego, which is itself based on the comical history of the character on the page. In 1939, with Superman and Batman enjoying success, writer Bill Parker and artist C.C. Beck came up with Captain Marvel — unrelated to the Marvel Comics character of the same name, who was created in the ‘60s and got her own film less than a month ago — about a boy who could transform into an adult superhero by shouting “shazam”. Captain Marvel outsold all other comics for a while, but it eventually ran into legal trouble and sold itself to what is now known as DC Comics. When DC revived the character decades later, Marvel's Captain Marvel was already around, so they rebranded him as ‘Shazam!'. 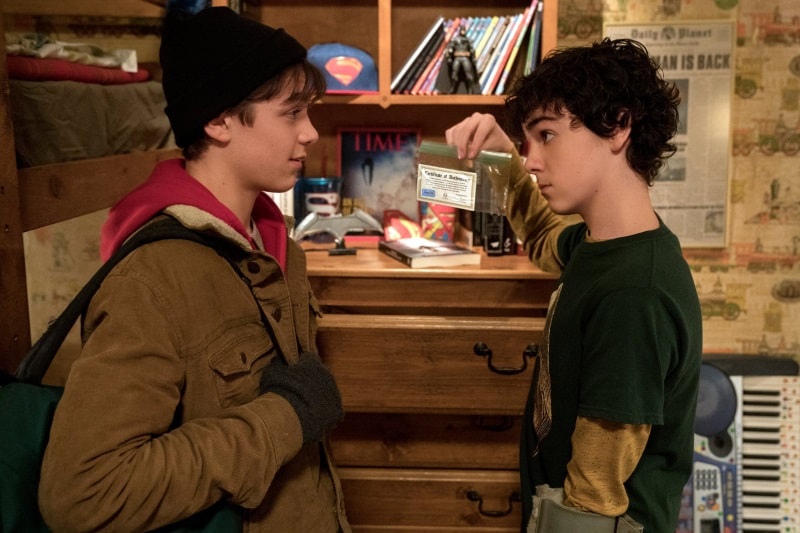 With Marvel now having a trademark on the character's original name, the words ‘Captain Marvel' cannot be spoken anywhere in the DC film, which uses that to power a running joke throughout Shazam! Freddy struggles to come up with a suitable superhero title for his foster brother — a couple of his cringeworthy attempts include ‘Thundercrack' and ‘Sir Zaps-A-Lot' — just as Billy struggles to come to terms with his abilities. The two fit like hand in a glove, thematically. On a plot level, Billy creates problems for himself and those around him, and he's hapless when he comes face-to-face with actual evil. There's a bit of a Spider-Man: Homecoming vibe to it.

The 38-year-old Levi does a terrific job of portraying the childlike wonder and enthusiasm of a 14-year-old being granted a host of superpowers, be it toying with a security guard at school or shooting lightning bolts from his hands while he dances and makes up new Shazam-themed lyrics to “Eye of the Tiger”. It's hard not to smile and laugh with him on this journey, given Billy's past and because how much fun he's having along the way. But there's also an incongruity between the actual teenager and his adult self. While the kid is calm and reserved at times, his alter ego is anything but, as Levi revels in the fact that he's been magically endowed with godlike powers. It's not an easy balance given the tone Shazam! is going for, but the film has trouble landing it.

But the bigger problem for Shazam! is that Strong's villain, Dr. Sivana, is one-note and boring. Even though he is introduced first in the film, he's not developed enough to feel like a credible human being and comes across as a cardboard character. And it doesn't help that his powers, similar to Shazam's, are drawn from the ‘Seven Deadly Sins' — yep, the very — which have a ghastly, ‘80s B-movie visual appearance in their manifestation. Shazam! would have been better off had it opted to give each of the seven a more appealing look, which would play off Shazam and his foster siblings' colourful energy. Moreover, the film is unable to poke fun at its villains, which is where most of these jokey superhero films usually falter. 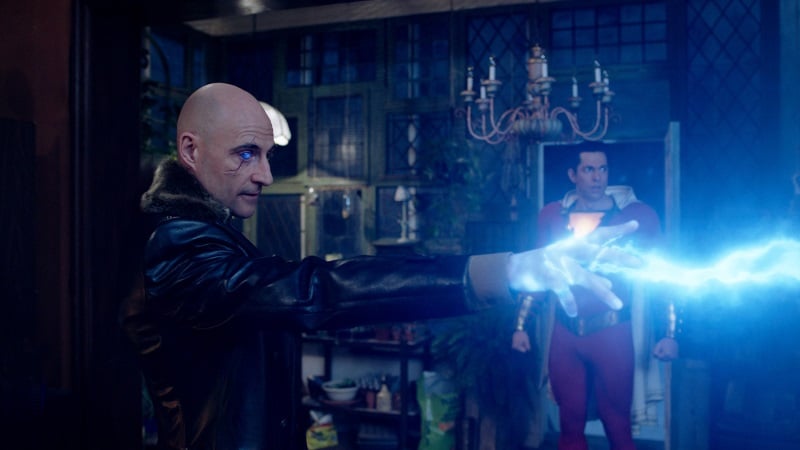 Shazam! has trouble with tonal consistency beyond that too. Though much of the early going is simplistic fun, making it a DC instalment that's more geared towards younger audiences than ever before, the need to have an antagonistic presence requires the film to shift gears into a more high-stakes and serious direction later on. As a result, Shazam! jumps between characters cracking up and an ominous soundtrack at times, and it doesn't always gel. The film also feels like it required some patchwork during reshoots and hence doesn't feel cohesive in places.

None of the action is memorable or special as well, with the myriad range of powers enjoyed by Shazam and his nemesis usually bringing a swift end to proceedings. Instead, the highlight of the action is how Billy cleverly uses his transformation ability to his advantage on a couple of occasions. And for what it's worth, Shazam! has one of the neatest surprises — one we didn't see coming — in store for its final third, a genuine twist that today's largely-predictable superhero films aren't really known for delivering. It saves the film from an unconvincing finish and also doubles down on the (foster) family focus.

Despite those shortcomings, Shazam! is a fun time at the movies for the most part and easily one of the better outings in the DC stable. Calling it one of the best films in the DC film universe is really a backhanded compliment though, considering how badly it has been going since its inception in 2013, with Wonder Woman still the sole highlight. Like that Gal Gadot-starrer, Shazam! can be enjoyed with zero knowledge of the rest of the DC universe, which is great. (It's also the first DC film set entirely in a real city, not fictional cities such as Gotham, Metropolis, or a mythological island or an underwater kingdom.) Its references to Batman and Superman work for everyone, simply because of their popularity.

Shazam! shows that DC can offer a lighter time at the cinemas, something it's been keen to slowly inch towards recently, with the reported development of Supergirl for the big screen, alongside the in-the-works standalone The Flash movie. The failure of the DC film universe could potentially be a blessing in disguise for the various filmmakers, as they don't have to be worried about canon and how to interlink their stories. For the studio Warner Bros., it means a wide variety of takes on the crowded superhero genre, but also pressure on each instalment to stand on its own. Shazam! is a promising step on that perilous journey.

Shazam! is out April 5 in cinemas in India and across the world.

Further reading: Shazam!, DC Comics, DCEU, Warner Bros
Akhil Arora Email Akhil
Akhil Arora covers entertainment for Gadgets 360, interviewing stars such as Christian Bale and Anurag Kashyap, covering series premieres, product and service launches across the globe, and looking at American blockbusters and Indian dramas from a global socio-political and feminist perspective. As a Rotten Tomatoes-certified film critic, Akhil has reviewed over 150 movies and TV shows in over half a decade at Gadgets 360. When he is not completely caught up with new film and TV releases, Akhil ...More
Semiconductor Group Urges More Research Funding to Counter China
LinkedIn Expands Document Upload Feature to Include PDFs, PPTs