Rogue One: A Star Wars Story – a Dark Addition to the Space Saga

In 1977, when the first ever Star Wars film arrived in theatres, it began with a text crawl that has now become iconic. It spoke of a civil war, Rebel spies, the Death Star, and Princess Leia. And while the original trilogy explored three of those things, it didn't really tell us much about the fourth – who were these Rebel spies exactly? That is the focus of the latest addition to the expanding Star Wars franchise, a standalone anthology film called Rogue One: A Star Wars Story, set just before the events of what is now called Episode IV: A New Hope.

Because of the text crawl, we know that the aforementioned Rebel spies “managed to steal secret plans” of the Death Star. But that’s where their story ends, not begins. Rogue One is the name of this group, and the movie is an exploration of how the team came to be, and not just an Ocean’s 11 in space. That would be much too straightforward, and so the writers – Chris Weitz and Tony Gilroy, the latter of whom also served as the head of reshoots – and director Gareth Edwards must subvert those expectations through every frame to display the odds stacked up against them, their struggle and what they had to endure to give hope to the Rebellion.

Rogue One manages this quite well. As the audience, we are already aware of what the Rogues achieved, but Edwards is able to keep us on the knife-edge for the latter half of the film. It's a delicate act, one that overdone could have resulted in a film that refuses to breathe. Thankfully, Edwards controls the action-heavy third act quite well, balancing heroism with a brush of realism, never afraid to be darker than every Star Wars film that's come before, willing to risk alienating viewers. It’s truly a war film first and foremost, and it embraces the grey tones that come with the genre.

Rogue One shines with the writers’ choices to keep things gritty and real, and not get bogged down with making its characters look cool. In that sense, the film handles its ragtag outfit infinitely better than the Warner Bros dumpster fire Suicide Squad. And what’s great is that Rogue One’s opening half-hour doesn't try to make instant heroes out of anyone, but allows them to be genuine human beings with their own principles, flaws, and agenda. 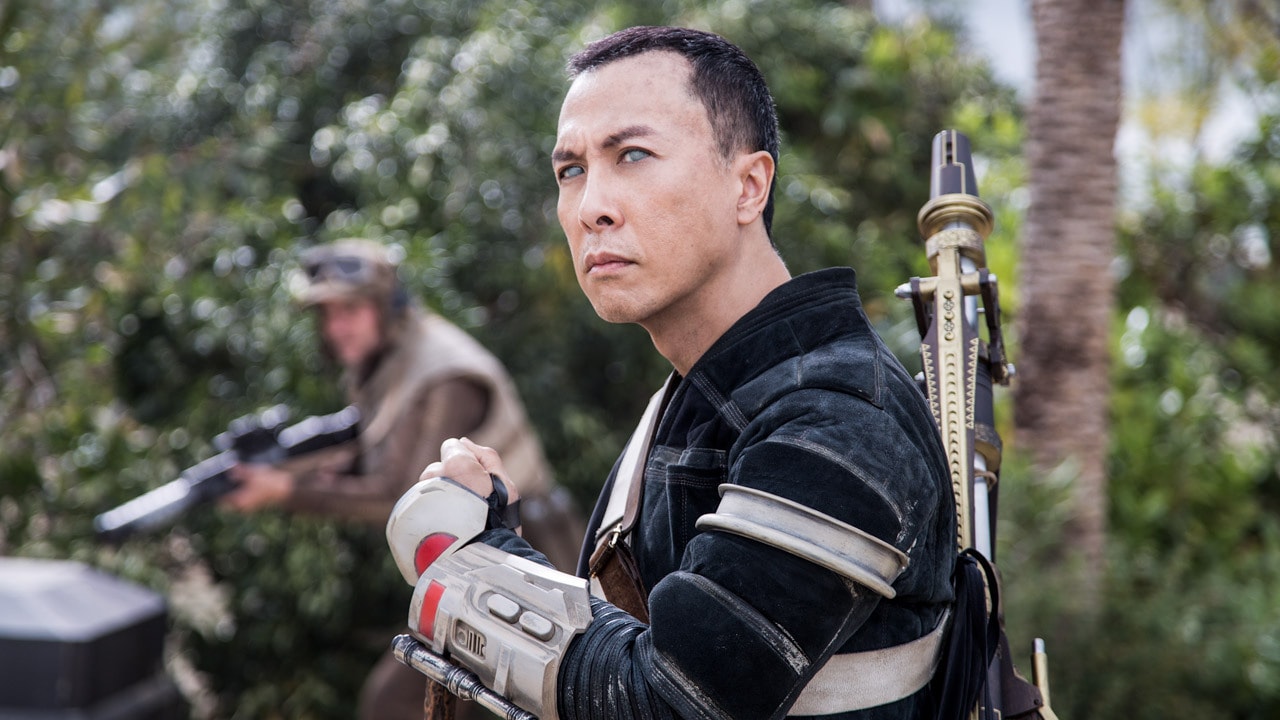 (Also see: What Is Rogue One: A Star Wars Story?)

Jyn Erso (Felicity Jones), daughter of Imperial scientist Galen Erso (Mads Mikkelsen), has spent her life in an out of Imperial prisons. She has no interest in the Rebel cause, and all she wants is to be free. Then there’s Cassain Andor (Diego Luna), an intelligence officer with the Alliance who takes no prisoners, and his pragmatic droid K-2SO (Alan Tudyk on stilts), always spouting statistics. Joining them is the blind monk warrior Chirrut Îmwe (Donnie Yen) – a strong believer in the Force – and repeater cannon-toting Baze Malbus (Jiang Wen) – a battle-hardened veteran who would do anything to protect his friend Imwe. Bodhi Rook (Riz Ahmed), a former Imperial pilot, rounds up the group.

Despite having to bring together such as diverse cast of characters, the film's first act can feel a bit of a slog at times, as it goes about assembling the motley crew via seemingly generic set-pieces. Save an opening sequence that introduces a young Jyn with her parents (not a spoiler, it’s been shown in the trailers), and principal villain character Orson Krennic (Ben Mendelsohn), a big Imperial baddie, Rogue One takes too much time to get going. Even as the film jumps from planet to planet during its first hour, it crawls to the point of being boring, which could easily make non-Star Wars enthusiasts completely lose interest in the film.

It’s only once the group has a direct objective at hand that things finally kick off. If there’s one thing that’s constant about Rogue One, it’s the very serious tone the film has at most times. As a result, Rogue One unlike the Star Wars films before it, never comes across as a fun adventure. There are hardly any aliens, no Jedi and hence no lightsabers (at least until Darth Vader appears), no wise masters, and the only bits of humour are delivered by Tudyk’s K-2SO, who gets all the best lines. Composer Michael Giacchino too, working off John Willaims’ classic score, feels constrained having to subdue the grander tunes that have been hallmarks of the rest of the franchise.

Even with its battle scenes, Rogue One focuses on the fighting happening on the ground and not so much in the air with spaceships. It’s a hard but real depiction of what life is like in the Star Wars universe for the everyman, and that even they can have a role to play in the big picture, without being reduced to the role of Ewoks in Return of the Jedi. Quite a few of the main cast die in the process too, and the film is clear in its understanding of the true nature of war. 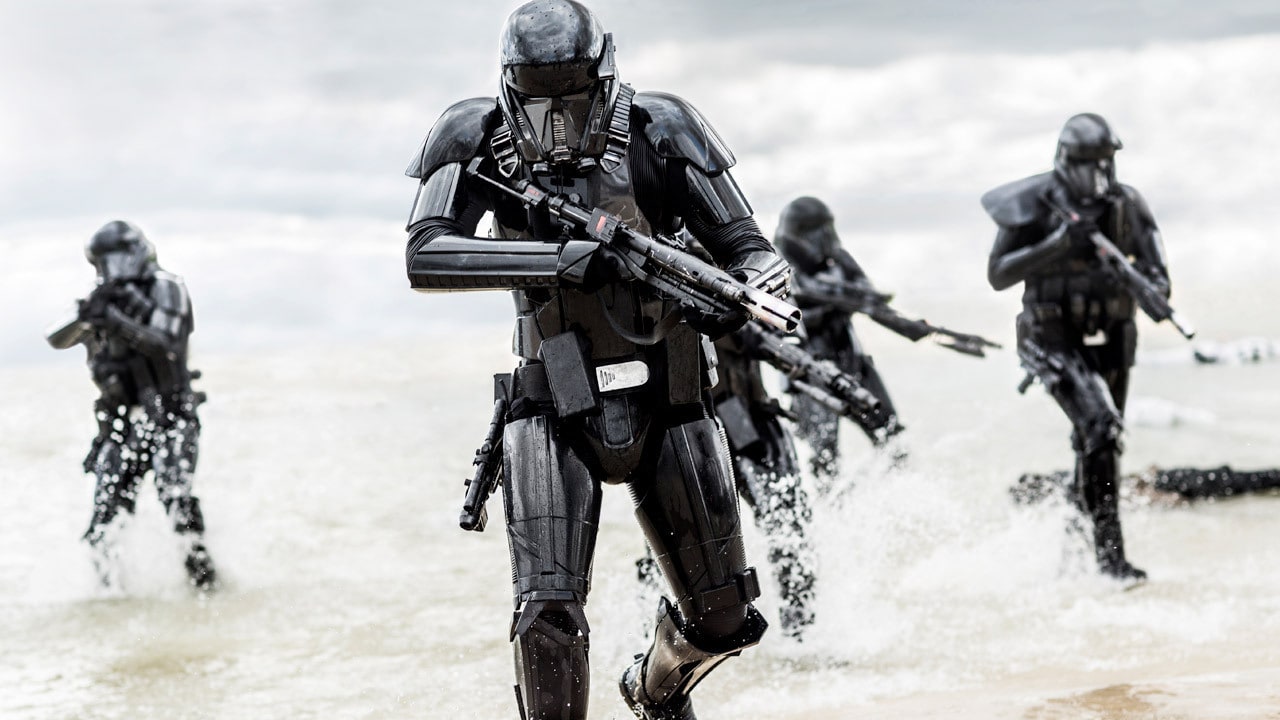 (Also see: Rogue One Is Going to be the Series' Establishing Character Moment)

As a film that advocates retaliating against a totalitarian government, Rogue One is also timely in its message, with politics getting in the way of doing necessary good, and agents of the Empire taking WMD-decisions in the name of providing peace and security. Despite its dark and grim outlook, Rogue One carries its lesson of never giving up hope right through its blinding-light ending, with an epilogue that will be all too familiar for anyone who’s seen the original. Together, Rogue One and 1977’s Star Wars seem like one film broken into two distinctive parts.

Rogue One even helps its counterpart by plugging a loophole, and explains why the most-feared invention of the Empire – the Death Star – had such a glaring vulnerability that it could be blown to smithereens by a lone pilot. Beyond that, there are enough well-placed Easter eggs for the faithful, many that you can find and will go "ooh look!" at. And while Rogue One’s main cast had no previous connection to Star Wars lore, its clever use of archival footage and computer-generated performances will instil nostalgia in viewers who fell in love with the original trilogy. The sequences that were met with cheerful and exuberant approval at the Indian premiere screening were ones that involved well-known characters.

In Rogue One, Edwards has made the most realistic of Star Wars than any before – and with that, also the most mature and grown-up one. This is not the fun-filled romp for the younger audiences that last year’s Episode VII: The Force Awakens was. Instead, Rogue One is the Star Wars prequel George Lucas should have made, and one that fans of the original trilogy rightly deserve.

product Our spoiler-free review of the first anthology addition to the Star Wars universe, Rogue One: A Star Wars Story, starring Felicity Jones in the lead, and directed by Gareth Edwards.
Comments

Further reading: Star Wars, Rogue One
Akhil Arora Email Akhil Akhil identifies himself as a stickler for detail and accuracy, and strongly believes that robots will one day take over most human jobs. In his free time, you will find Akhil beating the computer at EA Sports FIFA or streaming new highly-rated TV series. More
Xiaomi Mi Pad 3 With Windows 10, 8GB RAM Rumoured to Launch on December 30
Artificial Intelligence Creeps Into Daily Life

Rogue One: A Star Wars Story – a Dark Addition to the Space Saga
Comment